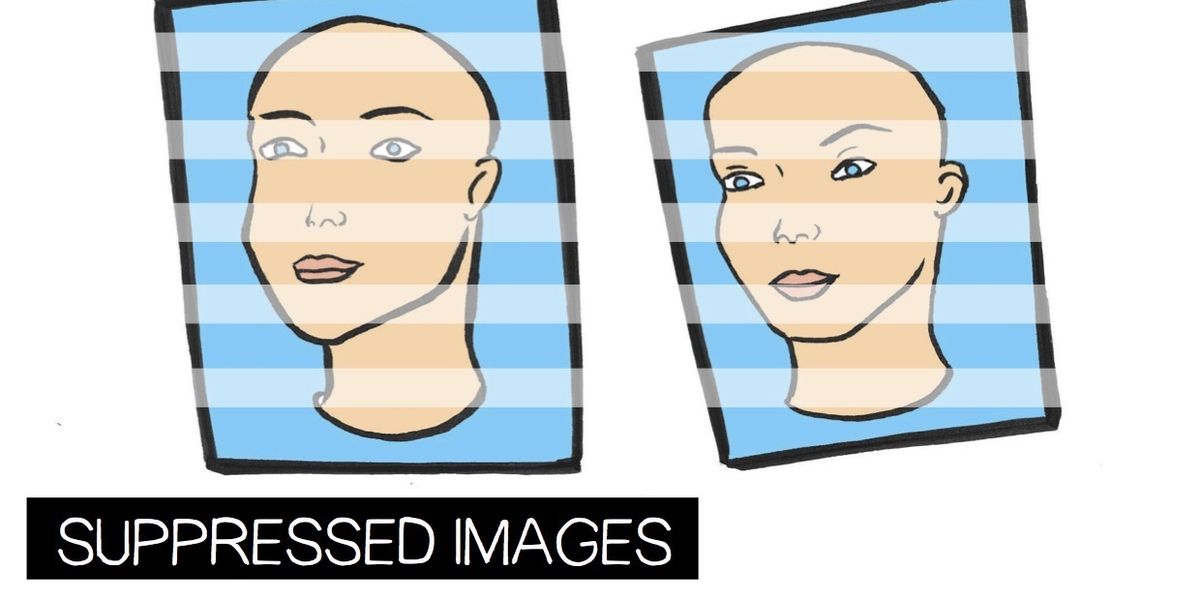 In 2015, artist Heather Dewey-Hagborg applied her practice of DNA phenotype portraits for a PAPER magazine feature on Chelsea Manning. Those 2D portraits went on to become 3D sculptures, and Dewey-Hagborg and Manning went on to cultivate a regular correspondence. This winter, with Manning's clemency campaign in full swing, the pair worked together on a comic book, titled Supressed Images, about their collaboration and a future they'd both like to see.

"Heather is a thrill to work with," Manning says, through a representative, about her work with Dewey-Hagborg. "She is fun and creative, even as someone with a scientific background. We totally geek out."

During an artist's residency, Dewey-Hagborg connected with illustrator Shoili Kanungo, and the idea to tell their story as a comic book fully developed.

"I used to sketch a comic strip in a notebook when I was a teenager," Manning says. "Before this, that was the extent of my comic book creation experience."

We spoke with Dewey-Hagborg about working with Manning on this newest piece, coordinating across continents, and how the recent news that Manning is on Obama's short list for commutation spurred the project.

What inspired you to create a new piece with Chelsea and put it out now?

Since the original collaboration on the DNA phenotype portrait we've been in touch, and I reached out to her because I wanted to send her high-quality prints of the portraits I'd generated, but I was worried—I didn't want to send her anything that would get her in trouble. That kind of began our letter correspondence. And when she wrote back to me, I was so amazed and inspired by her incredibly positive, upbeat attitude and how encouraging she was that I shouldn't in any way compromise my speech and should say and send anything I wanted to, to her. And from that point we started corresponding and every time there was a new branch in the project, I would talk to her about it -- for example, when the 3D versions of the portraits premiered at the World Economic Forum in January 2016. Also, we had been chatting on the backburner about other potential collaborations, but obviously it's been an incredibly complicated and busy year for her. Then post-Trump, realizing there was a short window to advocate for a commuted sentence, I wanted to work on something that would give her some extra boost of attention. I was working as an artist-in-residence at ThoughtWorks and an illustrator there, Shoili Kanungo, had seen a talk I'd did and was really interested in working with me. So the idea came together, what if tell this story of our collaboration in a new way but end it with a speculative twist where Chelsea is released and can come and see the exhibition of her portraits.

In this comic, how much input did Chelsea have in working with you? Or was it more just you and Kanungo collaborating on the details?

Quite a bit actually. Really, I think it was a collaboration between the three of us. So I wrote an original draft of the narrative and sent that to Chelsea and to the illustrator, along with some ideas of what the images might be. And then Chelsea really edited and rewrote and added lots of her own text, including rewriting the whole thing as a dialogue between the two of us. So the narrative plays out as a dialogue, much of which is drawn from our actual communications throughout the project. Then, I worked also with the illustrator on interpreting these into images, and she did a really beautiful and original job on that. But it wasn't easy! The illustrator's in India, and Chelsea can only communicate through the mail and through a liaison, and we're working on such a tight time-frame, so it was really intense.

With the election of Trump, obviously it feels like this window for commutation or consideration is closing. When talking with Chelsea and planning, did this add urgency to your project?

That wouldn't come from Chelsea. She would never ask someone or recruit someone to do some activist thing for her. She's really taking the long view on this situation, and I think, of course, she'd be totally thrilled if her sentence gets commuted, but she also has lots of other plans, and things she's working on and writing about—she's a very active individual. So that really came from me. That was me thinking, "What can I contribute beyond calling the Justice Department and signing a petition. What else can I do given that I have this bizarre, special relationship. How can I use that to her benefit?" And the side effect of that also, we are working on trying to get this out before Obama leaves office, but I think it stands on its own. It's not just a piece of advocacy. It's also a really interesting document of the collaboration and I think that will stand on its own.

News broke last week that Chelsea is on the short-list of commutations for Obama. Has that increased your anxiety to get this out, your excitement?

Oh my god, yes. When I saw that news, I was in tears, I was so excited about this. In the past few days I've been in Savannah giving artists' talks, and I had been in the process of working on my slides about the original project and right in the midst I see the news that she's on the short list. And I was so overwhelmed by the emotional significance of that and I'm looking at the comic and thinking, "What if this actually came true? What if she can see an exhibition of her portraits?" It's just totally overwhelming, but I think it gives a tremendous urgency to get this out and get it circulating and give that final push for Obama to do the right thing.