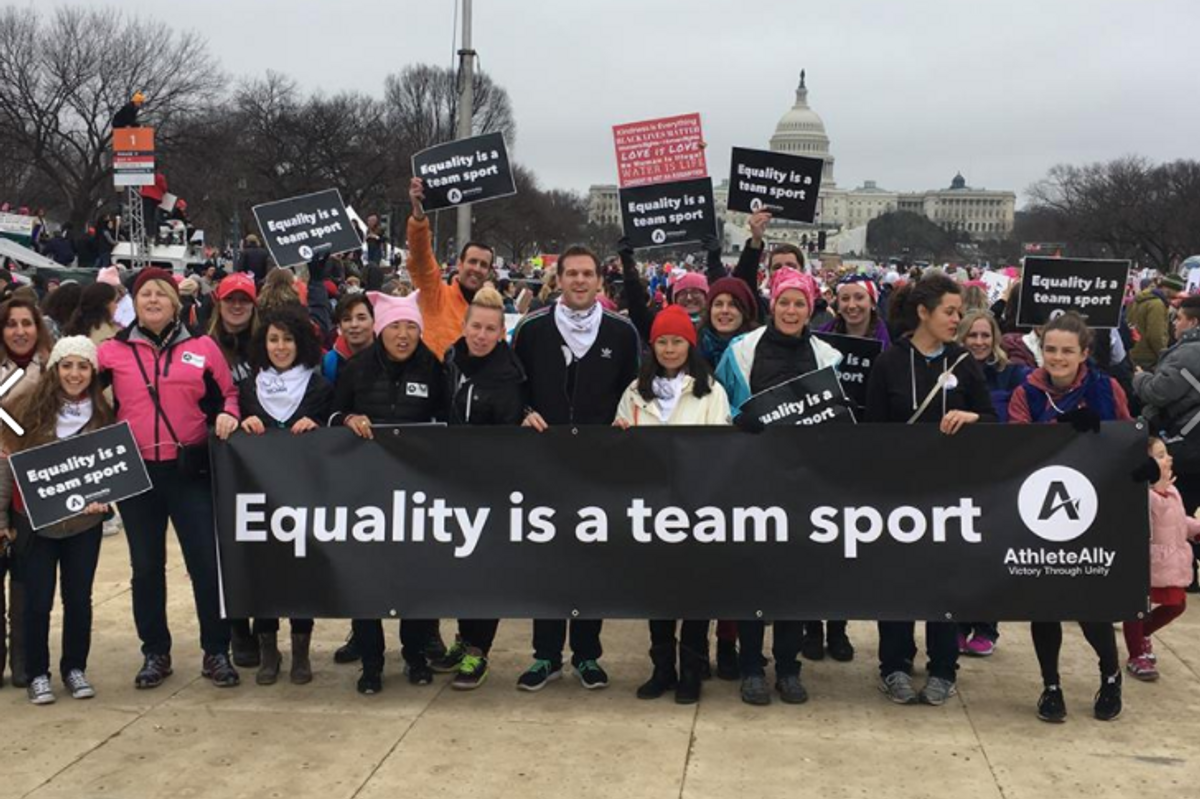 Athlete Ally, a nonprofit organization that promotes awareness of LGBTQ issues within the sports community, sent an open letter to the Texas legislature in opposition to a proposed bill that would bar transgender people from using the restroom that matches their preferred gender.

"We keep a close eye on anti-LGBT legislation, and especially as it intersects with sports," Athlete Ally founder Hudson Taylor told Teen Vogue. "When we heard the news of SB6, and what Texas legislators were looking to put on the books, the potential negative impact on the sports community in Texas made it a really easy and clear opportunity for us to organize athletes around."

Over 50 professional and collegiate athletes and coaches signed the letter, which asks legislators to consider the negative impact the bill would have on Texas' robust sports community - including trans athletes, coaches and their friends, families and supporters.

"As long as bills like these remain a possibility, Texas is sending a clear signal that LGBT players, fans, coaches and administrators are not welcomed or respected, both on and off the field," the bill states. "This should worry Texas, as the athletic community has clearly stood by its LGBT constituents and against discriminatory legislation. We have seen this story unfold in North Carolina, and we do not want it to be repeated in Texas."

This refers to the aftermath of the passage of North Carolina's notorious "bathroom bill," HB2, which prevents transgender people from using the public restroom facilities that correctly match their gender. The NBA moved its All-Star Game from Charlotte, N.C. in protest of the discriminatory bill and the negative effects it would have on attendees of the game, and as a result Charlotte is reported to have lost $100 million in potential revenue. Texas is scheduled to host the NCAA Women's and the NCAA Men's Basketball Final Four and the World Golf Championships among other highly attended events. The letter points out the massive loss of revenue likely if the NCAA and other organizations choose to host their events elsewhere as a result of the law.

Three athletes from Duke University, which is in North Carolina, signed the letter, including sophomore Riley Hickman of Duke's men's swimming and dive team. "I've watched what's happened in North Carolina with HB2," Hickman said. "It's caused too much harm to the LGBT community, our state, and our athletic communities. These bills are helpful to no one, and we must continue to fight discriminatory anti-transgender bills to fight for an inclusive space that protects all LGBT players, coaches, and fans."

Transgender activist, former bodybuilder, and transgender man Aydian Dowling said, "All athletes — regardless of their sexual orientation or gender identity — deserve the chance to reap the benefits that sports offer. Sport teaches us so many important life lessons when we're young — lessons like teamwork, perseverance, and respect. Everyone should be protected and respected enough to have equal access and experiences in sport."

Taylor spoke about Athlete Ally's mission to stand with the LGBTQ community. "It's the responsibility of everyone involved in sports to try to make that principle a reality," he told Teen Vogue. "I think as it pertains to transgender athletes, there is a still a real lack of protection, a lack of inclusive policies. We don't make sport equally accessible for our transgender peers unless more allies start to stand up and speak out."

Former U.S. Women's National Soccer team player Lori Lindsey said, "As someone who has worked and played at the highest level of my sport with players who identify as LGBT, it breaks my heart knowing that future generations of athletes, coaches and fans may be prohibited from excelling — on the field, in the stands, and in life. We shouldn't be building barriers to make life harder for a population that's already facing extremely difficult challenges daily."

Taylor also pointed out the negative effects of the bill not just on the athletes themselves, but also on spectators and sports fans all over Texas. "Part of the reason this impacts sports is that stadiums are the largest places of public accommodations, so wherever a sporting event is held, you're now excluding transgender fans from having a positive experience," she explained.

As the letter concludes,

Texas can choose to uphold the values of sport by rejecting SB6 and other anti-LGBT bills, and the negative impact they would have. These bills are answers in search of a problem that doesn't exist. SB6 isolates, excludes, and others the transgender community and exacerbates many of the issues transgender Texans already face. The only solution that embodies the spirit of sport is to expand equality by embracing diversity. That diversity is inclusive of the LGBT community and is why we hope you will do the right thing and reject these discriminatory bills.