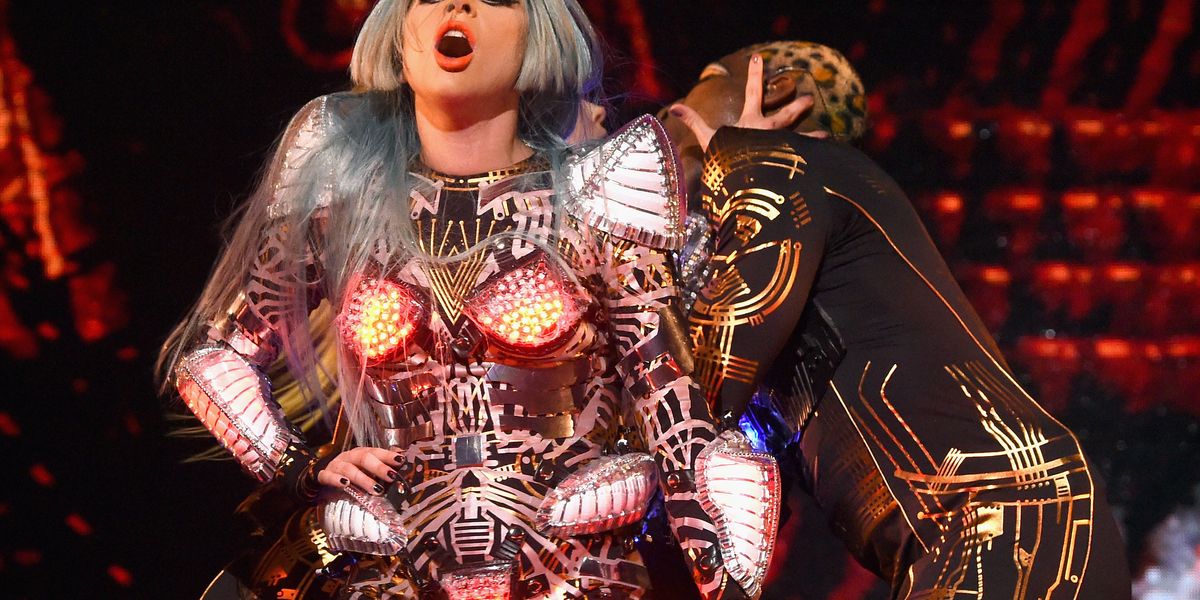 Of all the mind-blowing performances, and grand theatrics Lady Gaga has pulled off over the years — her space egg at the Grammys in 2011, the gigantic inflatable vagina she entered the stage through during her Born This Way tour, jumping off the "Edge of Glory" during the 2017 Super Bowl halftime show, and more — none compares to the opening of her Las Vegas residency at the Park MGM on Friday night.

The show is beyond anything even Little Monsters could ever imagine. It mixes cyberspace with outer space, introducing audiences to an entire alternate Gaga-fied universe. It involves anime avatars, space auras, some overhead soaring action, lots of crazy outfits, and Gaga taking control of a huge spider-like robot onstage.

It really is a lot to take in, so we'll try to break it down for you. Here's everything you need to know about the insane concert creation that is "Enigma":

In one of the teasers Gaga posted before the premiere of her residency in Vegas, the singer reveals that "Enigma" is another one of her alter egos. She introduces herself to a person saying, "Gaga. Or you can call me Stefani, or Enigma." In other words, this grand conceptual production is an expression of another side to Gaga, another iteration, another stage in her ever-evolving persona.

Gaga Reimagines Herself in Anime Form

As seen in the preview for the show, Gaga is shown in the form of her blue-haired anime avatar traveling through space. She shouts "Enigma!" when a small voice coming from the small ball of light replies, "Gaga." And at the end of the preview, she's greeted by an alien life force that says, "Hello, Gaga." And if you think the alien looks familiar, it's because...

True Little Monsters remember the 2013 Artpop days, and the PetGa alien online app that allows users to generate their animated auras. That's exactly what the alien creature in the preview above looks like. Now, people are excited for a possible PetGa resurrection.

For those who don’t know who PetGa is, she was the interface of the ARTPOP APP and she created your Aura. Im glad Gaga is bringing her back to give her what she deserves. #Enigma pic.twitter.com/QiIXIePSrf

There's a video going around the Internet showing a stunned Katy Perry as Lady Gaga flies overhead while singing her 2009 hit, "Just Dance." And, honestly, who wouldn't be rendered speechless by this?:

Gaga Takes Control of a Robot

The Show Features Some of Your Early Gaga Faves

Aside from "Just Dance," Gaga also performs her tracks "Poker Face," "Dance In the Dark," "Beautiful, Dirty, Rich," "Aura," "Applause," "Paparazzi," "shallow and "Scheiße," and "Edge of Glory." But during the premiere, she also performed, and cried while she performed "Shallow" live for the first time.

The first ever live performance of this SMASH HIT is just too breathtaking for words. I just can’t.......😭😭#ENIGMA

'Enigma' Is Only One Part of Her Residency

Aside from this wonderfully-crafted monster of a performative creation, Gaga will also tone it down for the second part of her residency. On select nights, she'll be separating herself from her usual flashy, high-energy, over-the-top act to do her "Jazz & Piano" show — a performance more akin to her album with jazz legend Tony Bennett.