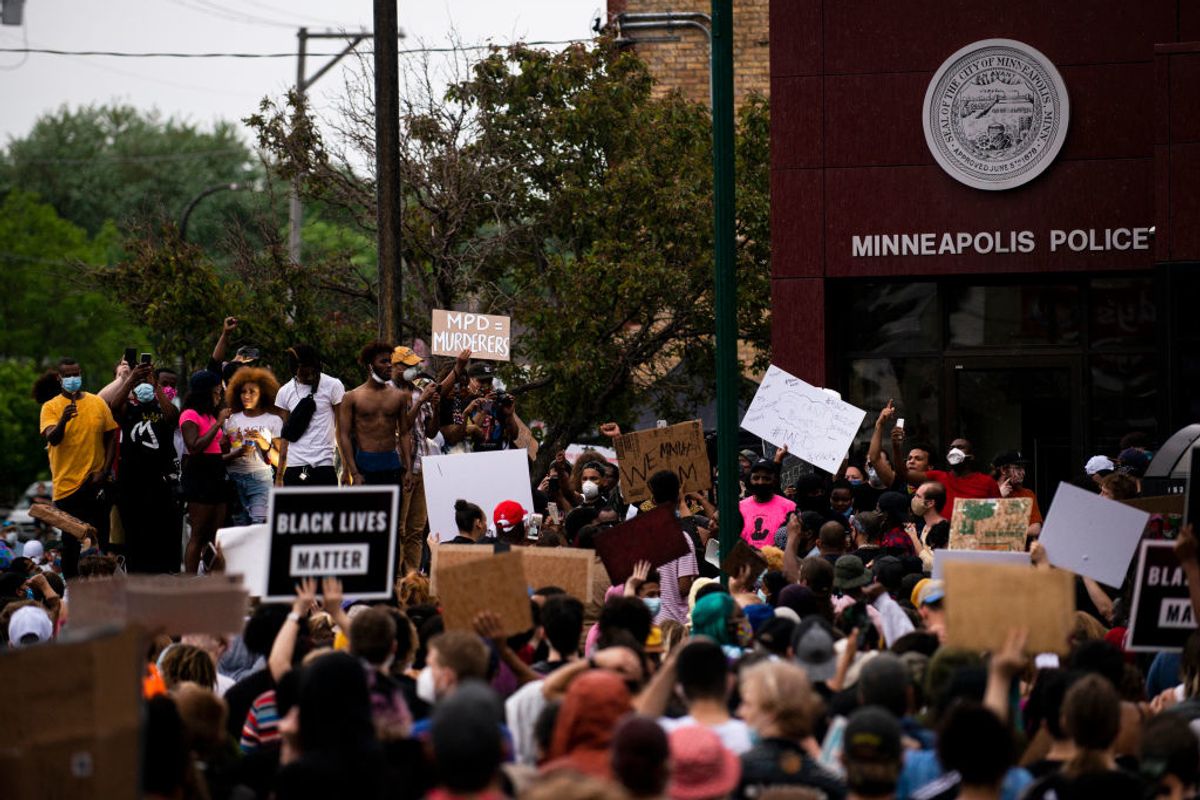 Following the death this Monday of George Floyd at the hands of Minneapolis law enforcement, communities everywhere are demanding justice. Officer Derek Chauvin, who was captured kneeling on Floyd's neck in a now-viral video, has reportedly been fired from his position, but protesters still want further consequences.

On Wednesday, Minneapolis' second round of protests escalated to many looting a Target, with locals running and taking products off shelves. According to Insider, a Cub Foods, a Dollar Tree and an Auto Zone were also stolen from and damaged, while windows of nearby strip malls were smashed out. Per The Star Tribune, there is a homicide investigation underway where one person was killed by gunshot near the protests. A pawn shop owner, who said the victim was looting his business, is a suspect.

As protests extended into the evening, with officers firing tear gas into crowds, Minneapolis Police Chief Medaria Arradando urged gatherers to find "peace" in a live TV interview. He told Fox 9 that an internal investigation by the police department's Civil Rights Division, as well as a local FBI field investigation, was underway. "Justice historically has never come to fruition through some of the acts we're seeing tonight, whether it's the looting, the damage to property or other things," Arradando said.

"The federal investigation will determine whether the actions by the involved former Minneapolis Police Department officers violated federal law," US Attorney for the District of Minnesota Erica MacDonald and Minneapolis Field Office's FBI Special Agent Rainer Drolshagen said in a joint statement on Thursday. "It is a violation of federal law for an individual acting under color of law to willfully deprive another person of any right protected by the Constitution or laws of the United States."

A THREAD OF WHAT YOU CAN DO TO HELP#BlackLivesMatter

Meanwhile in LA, protestors have been blocking freeways and shattering windows of California Highway Patrol cruisers in a rally organized by Black Lives Matter. Charlie Morales, who's one of hundreds of demonstrators in the freeway protest, told the Los Angeles Times that "nothing changes until you start interrupting, until you start putting it directly in the minds of people who aren't affected by it."

In addition to Floyd, Memphis is rallying for Breonna Taylor and Ahmaud Arbery, who're both victims of racist violence. What began as a silent demonstration for justice, turned into verbal confrontations involving Memphis police and counter-protestors. At first, the group was reportedly made up of about 40 people chanting the names of Black men and women who had been killed by police officers. Within the hour, two counter-protestors who were part of a Facebook group, called "Confederate 901," arrived. Their signs read "Police Lives Matter" and "All Lives Matter."

USA Today reported that Theryn C. Bond, a prominent local activist and former Memphis City Council candidate, confronted the counter-protestors, who occasionally jeered at the crowd to "go out for a jog" in reference to Arbery's death. "I was so impressed to see so many white allies," Bond said. "Because sometimes we think, 'Everybody doesn't get it.' And I think with the recent murder of George Floyd by police... I think this was the proverbial nail in the unfortunate coffin for America to really understand what we mean when we say, 'Black Lives Matter.'"

How You Can Demand Justice for George Floyd