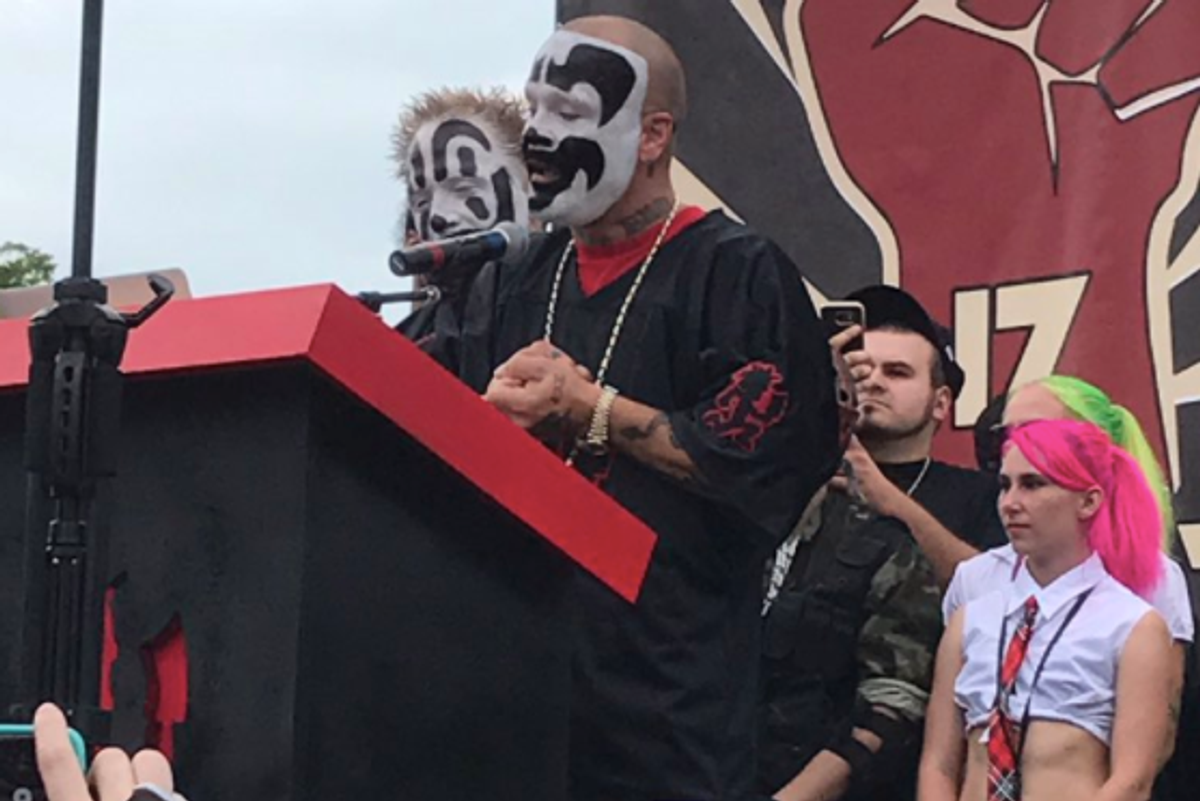 Juggalos Are Marching on Washington Today - Here's Why

Fans of Detroit hip-hop duo Insane Clown Posse are perhaps the OG standom of all standom. Known as the Juggalos, they form their own, tight-knit subculture with customs (black-and-white clown makeup, drinking Faygo) that seem strange to outsiders but make perfect sense within the context of the crew.

In its 2011 National Gang Threat Assessment, the FBI labeled the group as a "loosely-organized hybrid gang," and today the Juggalos are marching on our nation's capital to protest this classification.

The protestors claim that the marker is an unfair label, and has resulted in discrimination against and harassment of Juggalos who are just trying to live in peace.

"This is the day that we are asking every single Juggalo to join us in our nation's capital, Washington, D.C., to make a collective statement from the Juggalo Family to the world about what we are and what we are not," the march's website said. "Recently Psychopathic Records' court case in our lawsuit against the FBI and Department of Justice for listing Juggalos as a "loosely organized hybrid gang" in their 2011 Gang Task Force report was once again dismissed, meaning we are back to square one from a legal standpoint. We have tried to use the American judicial system to achieve justice and we failed […] We are taking our fight to the streets. Literally."

In 2014, the ACLU filed a lawsuit against the FBI on behalf of ICP fans, claiming the gang classification violated their First Amendment rights, according to Bustle. According to the National Gang Threat Assessment, Juggalos are classified in four states as a gang because of two incidents involving "suspected Juggalos" that showed violent or gang-like behavior. (In 2010, two "suspected Juggalos" were charged with assault and robbery, and in 2011 a "suspected Juggalo" shot and wounded a couple).

"[Like] other musical fan bases, the vast majority of Juggalos have nothing to do with criminal activity, let alone organized crime," a recent legal brief read, according to Complex.

Though the Juggalos' goal is not to protest Trump explicitly, the fight for a group to not be generalized based on the actions of a few errant members is particularly relevant in today's political climate. There is also a pro-Trump "Mother of All Rallies" happening today in the same location in D.C., which the organizers of the Juggalo march expressed concerns about.

"We're concerned for the safety of the Juggalos. The last thing we want is any kind of clashes or violence. We're just here for a peaceful march," ICP attorney Farris Haddad told CBS News. "After Charlottesville, we were like, 'Holy shit, this could be a problem.'"

However, as of 3pm EST today, no arrests had been made related to the marches.

Most of the signs at the #JuggaloMarch stick to their rallying call: FBI de-list them as a criminal gang pic.twitter.com/2YTMvM94Ol
— Alex Rubinstein (@RealAlexRubi) September 16, 2017

Designation as a gang by the FBI means Juggalo's can be descriminated against in housing, employment etc. #JuggaloMarch protests it in DC pic.twitter.com/32rlusAJg9
— Alex Rubinstein (@RealAlexRubi) September 16, 2017