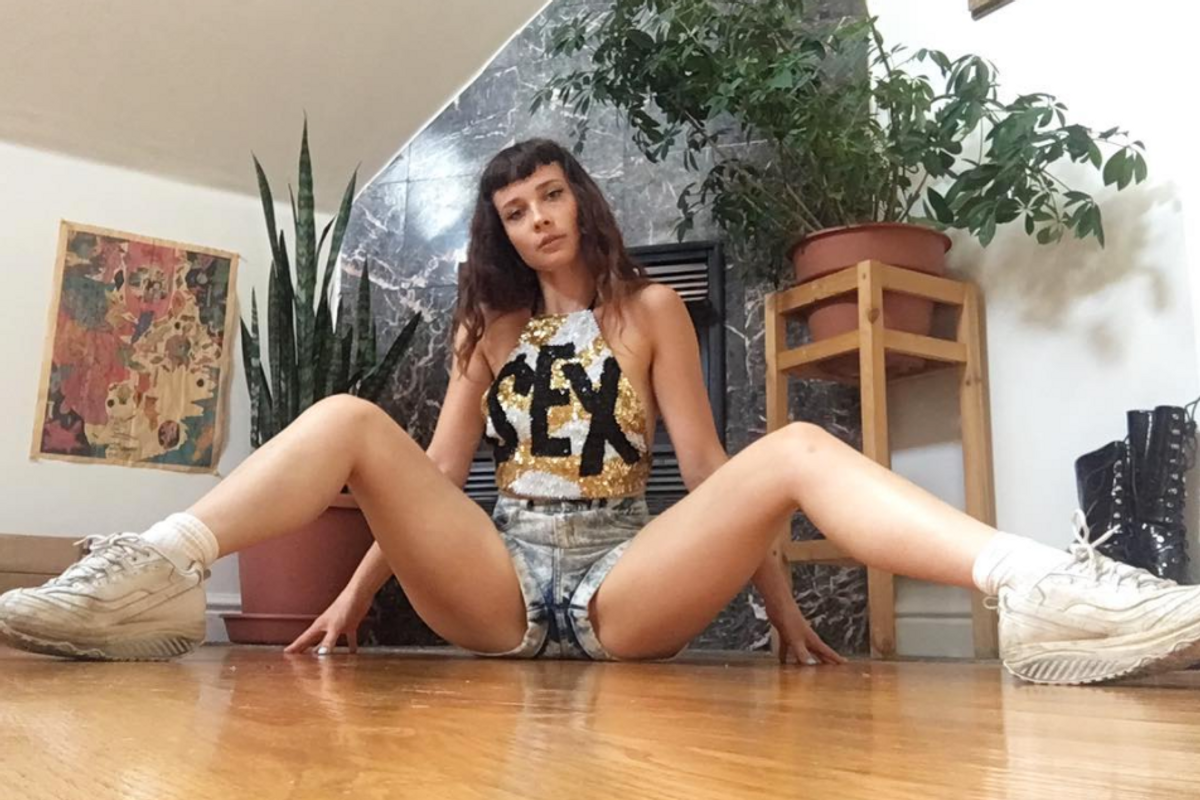 PLUS her top ten toy picks to level-up your sexcapades!

You're an artist, a journalist, a sex educator, and sex shop CEO – what came first and how did you get here?

You know, the sex theme has always been very present in my life, and it just bubbled out of me very organically. I don't remember making the specific choice to go down this route, but it was very much an organic progression. I started doing collage when I was around 17, and maybe around age 19 I got my hands on some really great pinup-y type magazines, which just kind of led into me using just full-blown '90s smut essentially. While I was working at a nightclub in Brooklyn for awhile during my college years, someone saw my art and said, "You know, I work at a sex toy store, and based on your art I think you'd really love this job." So I got the job at this sex toy store and through my time working there I was confronted with so many shocking realizations. Not just realizations about myself and my own body, but things brought to my attention [through customers] over and over again.

What kinds of things?

The first thing I ever felt inspired to write about was lube. I'd be helping a customer find a toy, they'd be really excited about it, and since silicone materials always have a bit more friction to them, I offer them a lube to go with it. More often than not I'd be met with offense when I asked them if they wanted lube, because society tells us that if you use lube you're broken or post-menopausal. I quickly began to realize that even though I also have this low-key negative stigma towards lube, I was like holy shit, so many people are having painful sex! Myself included! I mean I have personally undergone such a transformation in my own sex life as I began to use lube, so I started getting angry for being told that people were defective for using it. So I found myself with so many complex feelings about this lube issue particularly, that I think I just started writing a Tumblr post about it. That's when I realized, wait I really care about this.

So when did you started writing about sex professionally?

When I left New York two years ago, I was kicking my art around to different publications because I'd done a few illustrations and commissions, but I had a lot of people like Refinery29 that just wanted me to write for them based on my Tumblr. Now it's kind of gotten to the point that while I still write, it's not so much about the medium for me as it is the platform to discuss sex positivity and break down negative stigmas. At the end of the day, I just wish that there had been a person like that for me when I started having sex. While I had pretty comprehensive sex education, it's not like they go around talking to you about g-spots, how to orgasm, the fact that you can ejaculate if you have a vulva, and yes you should be using lube, and here's how you use it. None of that was covered!

There is just so much deep-seated emotional content in one's exploration of their sexuality, that it's kind of a scary world to delve into even if it's ultimately going to be improving your quality of life. Just like going to therapy, it's really beneficial that you have to do a lot of work, and there may be some upsetting elements along the way. Oftentimes, people will come to me in tears because their body isn't behaving in this specific sort of way, and they're comparing themselves to how they think they should be feeling. I think that if you have a vulva, you're immediately at such a disadvantage because you can't view your own genitalia with your own two eyeballs. Even though I had dial-up and was in *those* Yahoo chat rooms, it didn't even cross my mind to research sexuality until I saw a pop-up ad on a porn site for this female ejaculation series. It was actually a very inaccurate pyramid-scheme vibe, but I was still like "whoa." It took a pop-up ad for me to learn about female ejaculation! But even then I thought that female ejaculation was something that only a few gifted, talented individuals were able to do. I felt that way about the g-spot too, like, "I definitely don't have a g-spot, I would have known that by now" when in reality, the g-spot is very difficult to find by nature! To find it you gotta be aroused, you gotta where to look – there are so many information gaps along the way, that self-discovery becomes such a daunting effort. What was I gonna do? Explore the g-spot in order to learn that I just didn't have one?

We internalize so much bogus information and it ends up hindering our sexual development.

Yeah! PSA time: if you have a vulva, you have a g-spot. It's as simple as that. If you have a vulva, you have a g-spot. But when I post about that, and explain why, and break down the myth that the g-spot doesn't exist, people STILL don't believe me. It's like geez what are we pushing back against? I mean, if I ever talk about squirting I just have people shooting me links to articles written by men about how squirt is definitely pee. It so quickly becomes not about sexuality, but trying to dictate what is and isn't happening in a woman's body. Again it becomes an issue of gender, and women's exploration is quite repressed.

It seems like all the things you're saying about the stigma or controversy surrounding lube, female ejaculation and g-spots fall under the larger idea that if a woman can't experience these sensations or reactions just from being penetrated by a penis, it's her issue.

And that is by far one of my most frequently asked questions that isn't directly related to a toy. "If I can't have an orgasms from my boyfriend's penis, what's wrong with me?" Actually, if you're able to orgasm from just penis and vagina contact alone, you're statistically the outlier because 80% of vulvas need at least external stimulation if not external and internal stimulation to orgasm. Furthermore, within that small percentage of people that come from penis and vagina sex, they're probably also getting their clits stimulated by their partner's pelvis at the end of the day. All orgasms and stimulation really live in the clitoris, but people don't know that the clit is also a very large internal structure in addition to the small external part, and a lot of stimulation and orgasm also comes from the internal clit. I'm not gonna walk us through all the anatomy, but it's just like, if people just knew that you're most likely not gonna orgasm just from a dick being in you, and no you're not broken! It's just that we set women up for failure with this mindset.

So with all of this in mind, what were your goals when you opened Spectrum?

I don't think I said anything, I just quietly left. I felt like, "Wow, I am super comfortable with these topics and you made me feel so terrible! I'm trying to buy a dildo, give me a fucking break! I realized that's actually the experience that most people have in non-feminist shops. I think that something that makes Spectrum different from other sex toy stores is that I try to be as inclusive as possible. I don't want to shut people down if they accidentally use the wrong word. At the place I used to work, a lot of my coworkers were basically yelling and kicking people out for mistakenly mis-gendering an employee... it was that kind of an environment. While I completely see that attitude as valid, I did not want my shop to make cis straight men feel like they were walking on eggshells. I don't want to freak out the people that need to hear what we have to say the most!

In a recent interview, Tom Ford said something to the effect that all men should be penetrated at least once to help them understand women. With the caveat that nobody should do anything that makes them feel uncomfortable, do you think that there are things that every single sexually active adult should try at least once?

Wow! Ok, I do think that talking about being penetrated as a person who was socialized to be the penetrator is important. Many men I speak to aren't afraid of penetration because they're afraid it's gonna hurt, they're afraid of what it's gonna bring up for them emotionally. I think that I agree with Tom Ford, because you're really making yourself vulnerable in a way that you cannot experience solely as a penetrator. I think that the experience is important not only for the health benefits of prostate stimulation, but because you experience so many emotions when you're stimulated internally in that way that are just not the same at all externally.

I guess while maybe there's not a single sex act that all people should try, you should try doing things that put you out of your comfort zone, that make you feel vulnerable. Obviously things that are of your own choosing that you've done your research on – you're not like lighting your nipples on fire without a spotter or something. Total joke, by the way! For me, I masturbate in the exact same way with the exact same toys and I'm always like, damn Zoë, you really gotta mix it up a little bit. It can be something as simple as that! It takes a lot of self-awareness, because there's a risk of experiencing something you didn't account for emotionally when you switch up routines that are so intricately linked to your physiology and your mind. Sex actually occurs in your brain! Yes the stimulation happens in your genitals, but if you didn't have a brain to interpret all those neuro-chemical signals you wouldn't be having pleasure or sex at all.

We asked Zoë for her top 10 pleasure-boosting picks from Spectrum Boutique, which you can learn all about in the slideshow below (thank us later). Get your hands on the new collection of Zoë's collages, "Women with the Good Meat Removed" here.