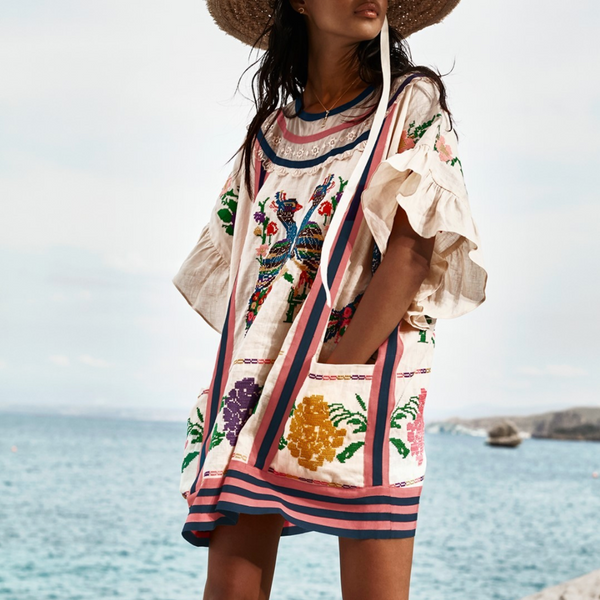 On Tuesday, Aussie fashion label Zimmermann, known for its feminine ruffled frocks worn by everyone from Katie Holmes to Chrissy Teigen, uploaded a photo on Instagram of a model wearing a printed tunic dress from its latest swim collection.

Not long after, many accused the brand of culturally appropriating traditional Mexican dress, particularly the embroideries and textiles used by the locals artisans of Huautla de Jiménez in Oaxaca. According to users, the tunic plagiarized the loose-fitting huipil designs of the indigenous Mazatec community. (The quetzal bird motif, panels and floral combinations native to Southern Mexico were among the offenders.)

After facing backlash, the company took down the dress from its website and stores and issued an apology on Instagram. "Zimmermann acknowledges that the panelled tunic dress from our current Swim collection was inspired by what we now understand to be a traditional garment from the Oaxaca region in Mexico," it read. "We apologize for the usage without appropriate credit to the cultural owners of this form of dress and for the offense this has caused. Although the error was unintentional, when it was brought to our attention today the item was immediately withdrawn from all Zimmermann stores and our website. We have taken steps to ensure this does not happen again in future."

This is not the first time fashion brands have been embroiled in controversy with the Mexican community. Last June, the Mexican government accused Carolina Herrera of cultural appropriation for its Resort 2020 collection, which features traditional embroidery techniques (The brand's creative director, Wes Gordon, said at the time that it was meant as a "tribute" to Mexico). And shortly after, Louis Vuitton was called out by the government also for its use of a traditional Mexican pattern in a chair design. (The brand issued a statement to Quartz saying it was "currently in a relationship with artisans of Tenango de Doria in the state of Hidalgo, Mexico, with the perspective of collaborating together to produce this collection.")

I can most definitely see similarities in the embroidery of the flowers, photo from Ericka Carmona, and the symmetrical birds from this top on Arellanos. pic.twitter.com/ep84sInceS