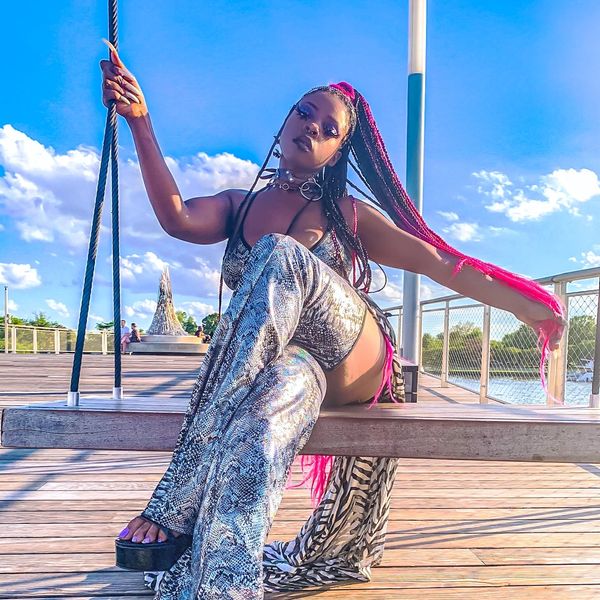 "It wasn't originally supposed to be that, but in the middle of the session I was just like, 'Fuck it, this is how I feel right now. So I'm just going to go ahead and do it," Zhariah explained. "I was like, 'This is me getting my anger out.'"

After all, amid continued protests for racial equity, the 22-year-old's domme performance videos have been steadily gaining traction online. And as clips of her reminding people that they are "still [her] bitch" to sitting on a sub soundtracked to Lil Nas X's "Old Town Road" proves, Zhariah definitely has a knack for creating content that resonates with Twitter.

But as she sees it, in addition to boosting her client base and domme profile, this turn of events has also proved helpful to her career as an alt-trap artist writing BDSM-inspired songs. Pointing toward songs like the recently released "Metals, Whips, and Chains" — a tough-as-nails celebration of dommeing with a video that sees her parading several subs around on leashes — the multifaceted artist said she's excited to be integrating these facets of her career together through her elevated online platform.

"I was just saying all those things and people loved it so much. And I was like, 'If it's going to get me noticed for my music then let me do it,'" she explained, admitting that it's been exciting to see how "the stuff that I was doing to make money for my music became my brand."

Even so, virality hasn't come without its own considerations. And this is especially true since she felt like she feels as if she's had to balance her "raunchy domme" persona with her desire to "stand for women's empowerment" — something that also plays into her goal of "educating people on Riot Grrrl, Black women in rock n' roll and Black women's empowerment." After all, as she pointed out, this all also lends itself to a larger discussion about how an artist like Zhariah is pushing back against racist stereotyping that contributes to the pigeonholing of Black women, particularly in music.

Thankfully, Zariah said that she hasn't gotten any pushback yet for being a Black woman in rock. However, as an artist who started by performing at hip-hop shows, she has gotten "a bunch of people who don't understand it" — though she's not about to let the naysayers get to her.

"[When I started making music] I felt so powerful, so enlightened, and so [I was like], 'I'm just going to see where this takes me,'" Zhariah said. "I would bring subs to shows and perform with them on a leash. And to vanilla people it was like, 'Oh my god, this is so crazy. I can't believe she's doing this... Is she really beating him onstage?' And it just became me, honestly."

However, balancing dommeing with her music has been its own sort of journey. According to Zhariah, while she has "always wanted to be a domme," her journey actually started after she met her dommeing mentor at a performance and was subsequently introduced to a prestigious dungeon in Philadelphia. After dropping out of Temple University and moving back home, she stopped dommeing for a moment and opted to focus on music — though after "Metal, Whips, and Chains" was completed, she felt like she had "to get back into the lifestyle again."

"At the time, I was going through the phase of, 'Oh my god, I dropped out of college' and society was like, 'What are you going to do with your life?' I was basically holding myself to societal standards of being a valuable woman. And I was like, 'Okay, I'm a domme, but me spitting on people isn't appropriate.'" Zhariah explained. "But at the end of the day, I sat with myself and was like, 'But I love this. I love being dominant. I love being wild. I love the attention. I love the money. I love all of this and this is me and who the hell is everyone else to tell me I can't [do this]?"

As a result, she's since joined the Black Domme Sorority, continued to make music and is determined to keep the momentum going when it comes to her popular dommeing videos. While juggling that all has proven to be a lot at times, they're things she said that she's not planning on stopping anytime soon, especially since they both feed into each other.

"If I stand for that as a brand, I have to be that for myself. We can be both. We can empower women, but I wanted to have my edge," Zhariah concluded, before adding, "Because if I'm not practicing what I preach, I'm a poser. And I'm not a poser."