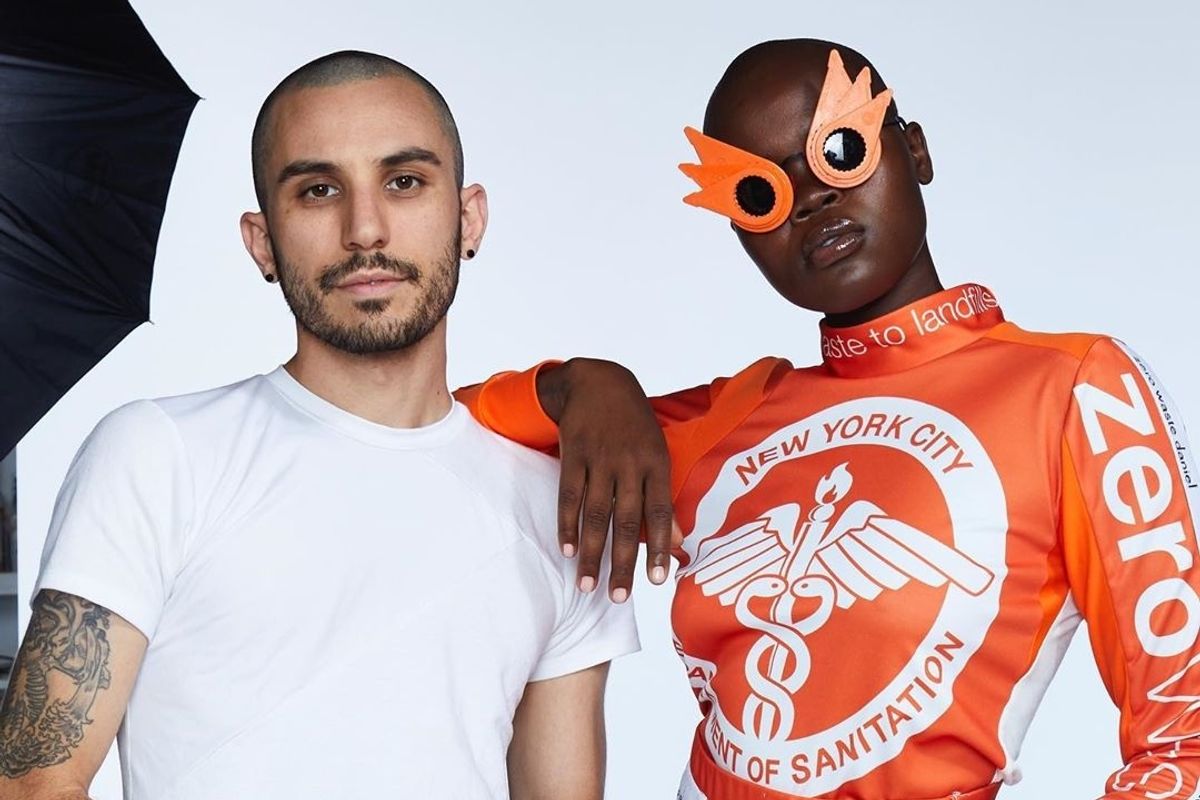 When Zero Waste Daniel leans forward and whispers, "This is an apocalypse," into the mic, he doesn't even have to clarify and we, the audience, just instinctively and viscerally know what he's talking about. The apocalypse of the influencer and follower binary. The apocalypse of capitalism and consumerism. The apocalypse of the glaciers disappearing, oceans rising, and climate change. The many, many small apocalypses, that really, is just one big apocalypse we don't even know where to begin to unpack.

Thankfully, we have Zero Waste Daniel to help make sense of it all and as a bonus, make us laugh, for a night during New York Fashion Week. Fashion is many things: fun, exciting, life-changing, a tool for self-expression, but it is also undeniably a resource-intensive industry that produces a lot of waste and pollution. Daniel is one such designer in the fashion industry who is reckoning with that status quo and taking on climate change in a fresh way.

He held his show and NYFW event, "Sustainable Fashion is Hilarious," at the Ace Hotel. In collaboration with the Department of Sanitation, he performed a comedy routine and showcased an eco-streetwear collection.

The comedy routine touched on every part of what keeps people, as Daniel calls them, consumption zombies during the current instance of apocalypse. It's a clever reframing: the apocalypse is not going to happen in 30, 40, or however many years when the Earth dies, but rather, the apocalypse is happening right damn now. It's a zombie apocalypse, and we're the zombies who just can't stop buying and sending trash to landfills.

In addition to the set, there was a video component with short segments scored by memes, iconic capitalism anthems ("Material Girls" by Madonna and "Everybody Mad (feat. Beyoncé)" by O.T. Genasis made features), movie scenes, and random audio clips. Memorably, in one segment, Daniel emulated evil billionaire Dr. Evil from Austin Powers, as he spun around in a chair, holding and stroking a trash-baby in his arms instead of the movie's original fur-baby.

As for the clothing and accessories on display, they were made from hard-to-recycle materials (some directly from sanitation trucks) and decommissioned Sanitation Department goods such as tents and tablecloths. As his fashion line's name implies, Daniel is a designer that aims to produce zero-waste. His line, Zero Waste Daniel, is sourced from pre-consumer waste from New York's garment industry. Scrap materials are sorted and reused, and nothing is sent to the landfill.

The other collaborator of the show, New York Department of Sanitation (DSNY), is, well, intimately acquainted with everybody. They remove your garbage, recycle your trash, and clean your streets. All ticket sale proceeds of "Sustainable Fashion is Hilarious" went to DSNY's nonprofit arm, The Foundation for New York's Strongest.

This also isn't DSNY's first time in NYFW or first collaboration with a designer. Eagle-eyed sanitation department staff spotted a past collaboration on an individual who was wearing a DSNY collaboration with ONLY NY, a New York streetwear brand. Back in 2017, designer Heron Preston (who has worked with Kanye West and Nike in the past) also collaborated with DSNY to release a collection of adapted DSNY uniforms during NYFW.

Just like Daniel, we're stans of the New York Sanitation Department and appreciate them very much. Visit here to see how you can support them. And, as Daniel mentions in his set, say thank you to the next sanitation worker you see instead of getting angry that you're trapped behind their truck.