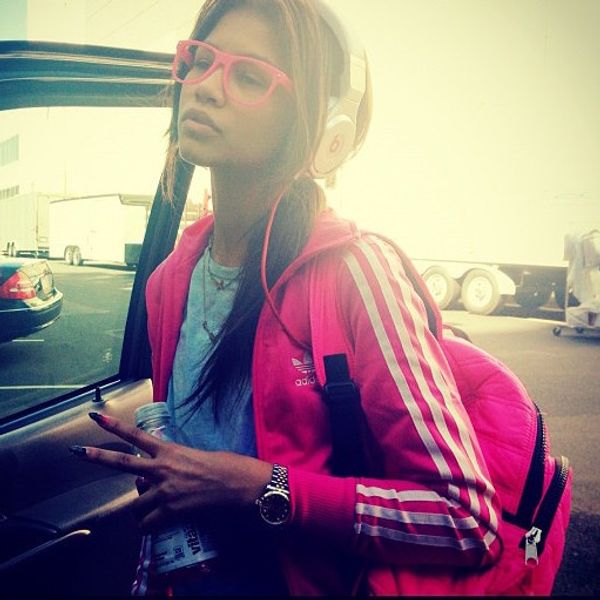 These Zendaya Throwback Looks Will Take You Back

Now that the shocking season finale of Euphoria has come and gone, and season two is still a ways off in pre-production land, the world is in need of all the Zendaya it can get. The star, who plays Rue — a recovering teen drug addict navigating the tumult of Gen Z life — is seeing a spike in interest in her past endeavors now that we're in HBO limbo leading up to the announcement of the new season. Most are remembering her iconic Disney Channel roots and critically-acclaimed performance in 2017's The Greatest Showman, but others are throwing it back to an era so familiar that it's got Stan Twitter "sksksk-ing" all over the place.

Enter, stage left: Mindless Behavior-playing, Valencia filter-using, snapback-wearing, Frappuccino-sipping era Zendaya. Imagine, it's 2012, you're changing your duck-lip profile photo on Facebook while playing "TTYLXOX" on your iPod Touch, preparing for a night out. That's right, strap on your Osiris shoes and get ready to go back. We've put together a collection of some of Zendaya's best looks from the YOLO era of yesteryear just for your #TBT enjoyment — you can thank us later.

Before the 2015 Adidas track pant boom, Zendaya was already in her "zone," rocking a head-to-toe triple stripe look for the 'gram. A dash of spon con is also present, with a #beatsbydre shot making an appearance in the collage. The only thing missing from this look is a snapback and a song recommendation. "Swag It Out," perhaps?

The "Swag It Out" era deserved a merch collection — there, I said it! The music video for Zendaya's mid-Shake It Up single, filmed in her hometown of Oakland, had looks on looks, in addition to more #BeatsByDre spon con. It's a reach, but I'm officially advocating for an official Z-Swag cropped bomber jacket merch drop.

Friends Who "Shake It Up" Together, Stay Together

Who could forget the pinnacle of early 2010s style, Zendaya and Bella Thorne's Disney Channel show, Shake It Up? The show was truly a gift, launching Zendaya into the mainstream, but also showing us all how to make Limited Too runway-ready. It's evident at this point that Zendaya truly had a thing for cropped varsity jackets, but didn't we all? This particular fashion moment has the dynamic dancing duo in offsetting pink and blue dress-jacket combos, and it's everything. Look at Zendaya, she knows it. Giving you proud cheerleader realness.

Zendaya's August 12, 2012 OOTD has amassed nearly 50,000 likes on Instagram, and rightfully so. The fit of the day was a studded-sneaker, tie-dye vest combo with Hello Kitty drop-crotch pants to balance it all out. The studded-everything craze that swept through malls across America during the early 2010s is almost inconceivable in 2019, but trust and believe — this was the look. If you didn't buy studs and E6000 in bulk on Amazon so you could up your denim jacket game, did you even have a #PassionForFashion?

"No Such Thing As Too Much Pink"

Rounding out our list is possibly the most poignant look, encompassing and indulging in some of the hottest trends to ever grace your middle school halls. The lens-less pink "nerd" glasses, the Vitamin Water, the oversized Beats Studio headphones, the color-coordinated backpack, the candid pose. You love to see it, you really do.