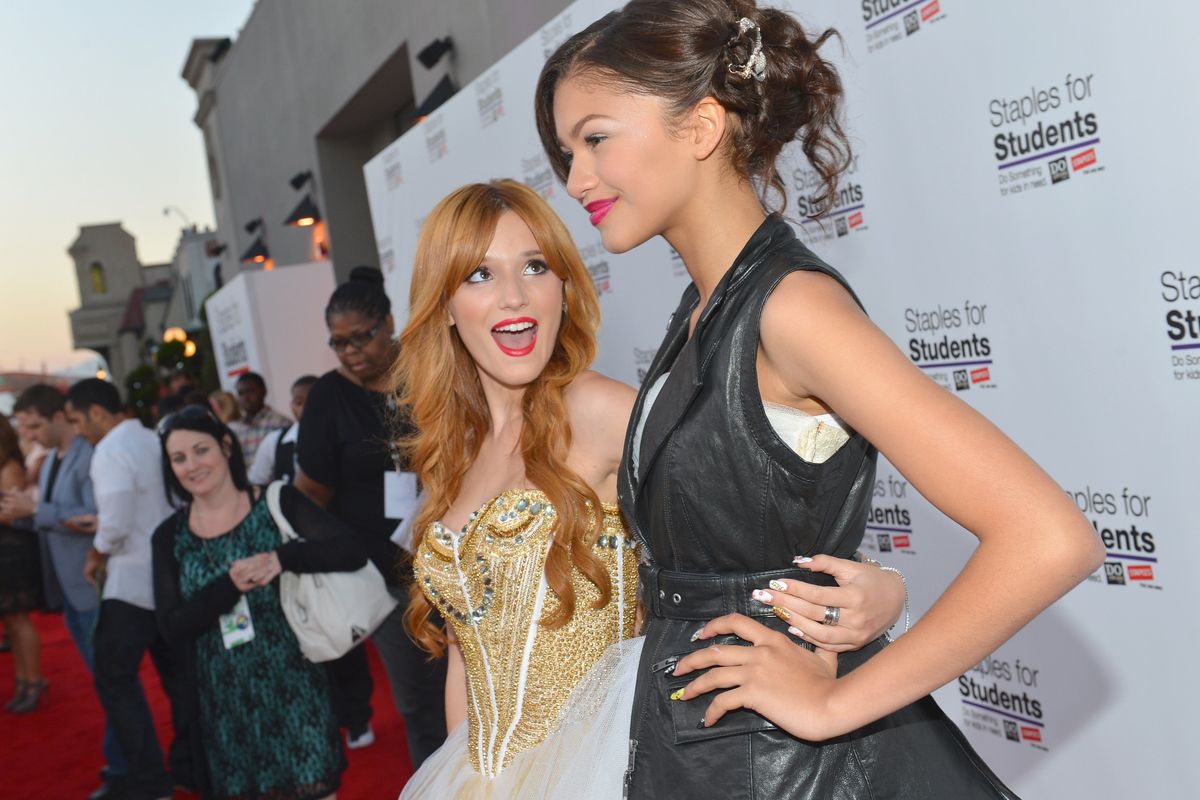 Zendaya Coleman and several other stars are voicing their support for Bella Thorne in the wake of her nudes scandal and Whoopi Goldberg's subsequent criticism of her.

Earlier today, Thorne took to her Instagram to share screenshots of texts, DMs, and tweets from fellow celebrities — including Dove Cameron, Lily-Rose Depp, and Madison Beer — urging her to stay strong.

When ur friends come out of the woodworks to support u is all u need to be brave. PART ONE and thank u @dovecameron for speaking up SO much on this matter and posting on your grid.

And amongst one of Thorne's strongest supporters was former Shake It Up co-star Coleman, who sent her a text expressing her admiration for the way she stood up for herself.

"Just a reminder that you are strong and courageous and beautiful inside and out," Coleman wrote. "You fucking broke my heart with that damn ig post but anyway, just being a fucking sap right now lmao just letting you know you're a light and I'm super proud. Love you."

All u need is support to be brave part two. @zendaya called me today to make sure I was ok, we talked a lot about this generation, the one before us as well, and how as women we shouldn’t feel bad about ourselves our bodies. Slut shaming is one of the biggest topics of this generation but yet we still keep going some how. It’s really really sad. 🚫 the view 🚫

Others who reached out to Thorne include Pretty Little Liars star Lucy Hale, who wrote, "This breaks my heart. But you're making a difference for other girls and women," and Empire actor Serayah McNeill who said, "Your [sic] a fucking boss! So inspiring! Independent at that! Keep doing you!"

For context, in the wake of the controversy — which began over the weekend after Thorne posted her own nudes in an attempt to thwart a hacker — Goldberg chose to criticize the star's decision to take the nudes in the first place.

"If you're famous, I don't care how old you are. You don't take nude pictures of yourself," Goldberg said Monday on The View. "Once you take that picture, it goes into the Cloud and it's available to any hacker who wants it, and if you don't know that in 2019 that this is an issue, I'm sorry. You don't get to do that."

Thorne also pointed out Goldberg's lack of sympathy in this "awful situation" before adding that she would no longer be appearing on The View as scheduled. According to People, Goldberg has yet to respond to Thorne's criticism.