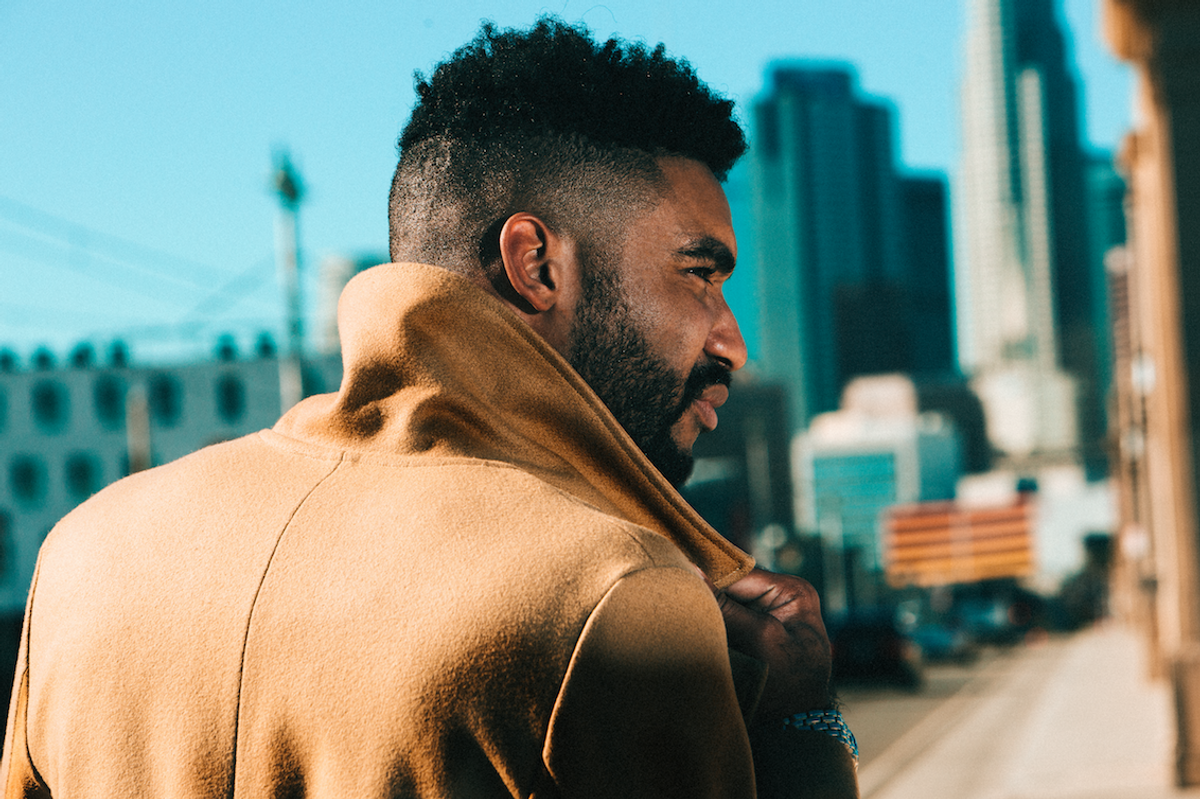 Zeke Thomas: 'If You're a Rapist, You Shouldn't Be President'

The #MeToo movement has been a watershed moment for women and survivors of sexual assault, kicking off this past October with a retweet by Alyssa Milano followed by a flood of stories pouring forth from Hollywood, and from every industry, really, about decades of abuse lurking in plain sight.

Before that moment, though, Josh "Zeke" Thomas was already sharing his #metoo story. The son of NBA legend Isiah Thomas, 28-year-old Zeke was living and working as a producer and DJ in Chicago in 2016 when he was raped by a man he met on Grindr. What followed for him was a dive into the trauma that is familiar for survivors: drinking, dissociating, isolating, depression.

A year after the incident, though, Zeke made the brave decision to share his story with the media, though he says it was partially because he knew it might come out anyway. He sat down with Robin Roberts from ABC's Good Morning America and Carl Swanson from New York Magazine to talk about the assault in depth — he doesn't believe in glossing over details — as well as its fallout, and how he got back to himself with the help of family, friends, therapy and his own will.

We caught up with Zeke, fresh back in New York from speaking at the first Teen Vogue Summit in LA, to chat about what it's been like to be a public survivor in this moment and his vision for a better world:

You spent the first part of your adult life focused on music. What are you up to now?

I'm focused on a lot on activism. It's kind of taken first position in my life.

When I came out about my story about sexual assault, my rape and dealing with trauma and addiction and recovery, it was just really more for me to tell my story. When I was going to these groups and everything, and people were being like, "Can you be on my podcast?" I was like, okay, I need to tell this before it gets out.

I didn't realize the impact that it would have and coverage that it would get. It's definitely something that's changed my life. I enjoy helping people, I enjoy talking, I enjoy now this activism space that I'm in. Before, I was supportive of other causes like education, but not something that really affected me.

Music's my passion and first love and always will be, so I'm excited about everything that's coming out, and still DJing. Even when I'm at home, I'm just like okay, let's mix, and I have four new singles coming out soon.

You've talked about how important it is to have a good team behind you. Who is on your team?

The number one thing that I have to cope with [is] myself. I have to deal with me first. And what I mean by that is, my mind has to be right, my body has to be right. This is your vessel. What are you putting in your body? What noises are you hearing? I do a meditation every day. I eat beets and green juice and disgusting things, but it keeps the center going. You have to know what you're putting in your body.

And then I have a phenomenal manager, I have a great publicist, and I go to therapy, you have to have a great core around you and a positive core. An uplifting core. If you have a lot of negative people around you, you're going to do negative things. The energy that you surround yourself with is going to help you.

I would imagine that's become especially important to you over the past year.

It definitely has. I lost a lot of friends. I got disconnected from a lot of friends when I was going through my trauma, and getting into drugs and getting into alcohol, heavy. Just wanted to numb myself from the world. Missing appointments, missing weddings, missing baby showers. All I wanted to do was just be in bed by myself or with negativity.

And it was just a time where, you got to climb out of that hole. And now that I've climbed out of that hole it's like OK, got to change your lifestyle. Even that is a shift and it takes time. It's become the most important thing over the past six months. After dealing with trauma and dealing with therapy and really doing the work to get my mind right. I had to go back to my core friends and say look, I know you know what I went through just in terms of mass media and it's out there but hey, I'm sorry that I missed this. Can we go back to how it was and fix this? And some of them said yes and some said no.

Were you friends supportive before you told the story to the media?

My friends, they'll say they knew something was wrong but they didn't know what to do. And that is a common topic. For a lot of things. Even with people dealing with depression and suicide, it's like, "What do we do? How do we talk to you, who do we go to, is it my job to do this?" I really tell people, if you generally ask somebody, "Are you okay?" it's not your job to make them better. But we just tell you, "I care, I love you, I'm here for you. What's up, what can I do?" There's nothing wrong with telling somebody's parents or a partner or a spouse or whatever, "I'm noticing something, maybe you should look into it."

When you're out now doing gigs and things, do people bring it up to you?

I get people reaching out everyday. I check my Instagram like a monster. I don't really engage people on Twitter, but the DMs on Instagram that I get, even people reaching out to me in different languages that I have to like, Google translate, I read. I did a show at Public Hotel last week, Sugarcube and Parson James and Lil' Kim came through and it was awesome. And there were two people who came and said, "I really appreciate the work that you're doing, you're changing my life." And that's in a party atmosphere!

What was your family's response to you telling them?

The response from my family was great in terms of, "Let's help, let's get therapy, let's do the work, let's get you right." But in terms of them being able to verbalize it and accept it, that's something that we're still working on.

What's it been like to be going through this moment, where women all over are sharing stories, as a man and as a gay man?

Yeah, Silence Breakers, I think it's more, "Survivors." These women, these people went through this. It's not even Silence Breakers, it's Mountain Movers. When I came out with my story in April, Robin Roberts was so amazing to do, New York Magazine was so amazing to cover it. But it was very black and white when we were pitching it: "we'll take it" or "we won't take it. This is too much for our audience, we can't take it, we can't cover it."

And now much later it's like, everywhere. It's TIME, it's, "we're going to push this narrative." That to me is amazing, but we have to get to a point where we're telling the raw story. Because that's the truth that's going on. Even hearing the Harvey Weinstein tapes, to know these things are going on, that's the story, and that's what we have to elevate and talk about.


Why do you feel like that's so important to focus on the details?

We have to get better at telling the true story of who individuals are, and I feel like that's important because you're giving mixed messages of groups. And that's the way history is going to be told. With black people, you get an image of gangbangers or whatever, for awhile that was the narrative. That's what's caused police violence, because this is the image we're seeing on TV, this is all you're hearing, about so all of a sudden, I feel threatened by a black man. We have to tell the real story. Who these people are. How they work. How they play. And that's what's gonna change the world.

Many of the men confronted have made apologies that seem to fall short. What makes a good apology?

Even in Congress, people are having to apologize, are losing jobs, for things that happened 20 years ago. But they happened. And you are now in a position of power. Should you be there? Would you have been there if everybody knew this happened? It's something that we as a society have to make a conscious decision about.

It's hard to now look at some of these people who have done such good with their lives, whether it's charitable work or great political work or whatever, but we have to redefine what it is to be great. We have to redefine that, and then stick to it. So, if you are a rapist, you're not great. You should not be president of the United States. We have to define that.

In terms of sexual assault, in terms of climate change, in terms of everything, it's like we missed a lot of beats. Growing up, all I heard on the radio was "bitches and hoes." That's all I heard, every day. So now it's like, "Okay, that's what we heard, what are they hearing"

Change seems to come in these waves.

Change is hard. I was just telling a girl today who wrote me, "You are doing great work, and you're going to run into walls." And when you run into that wall, look back not on what you're doing wrong and the obstacles and the wall you're hitting, but look at the progress that you've made. Whether that's the progress you've made in a week or in six months. And that's what you focus on. Not the negative, you focus on the positive. You have to say everyday, "You are amazing." Because you are.