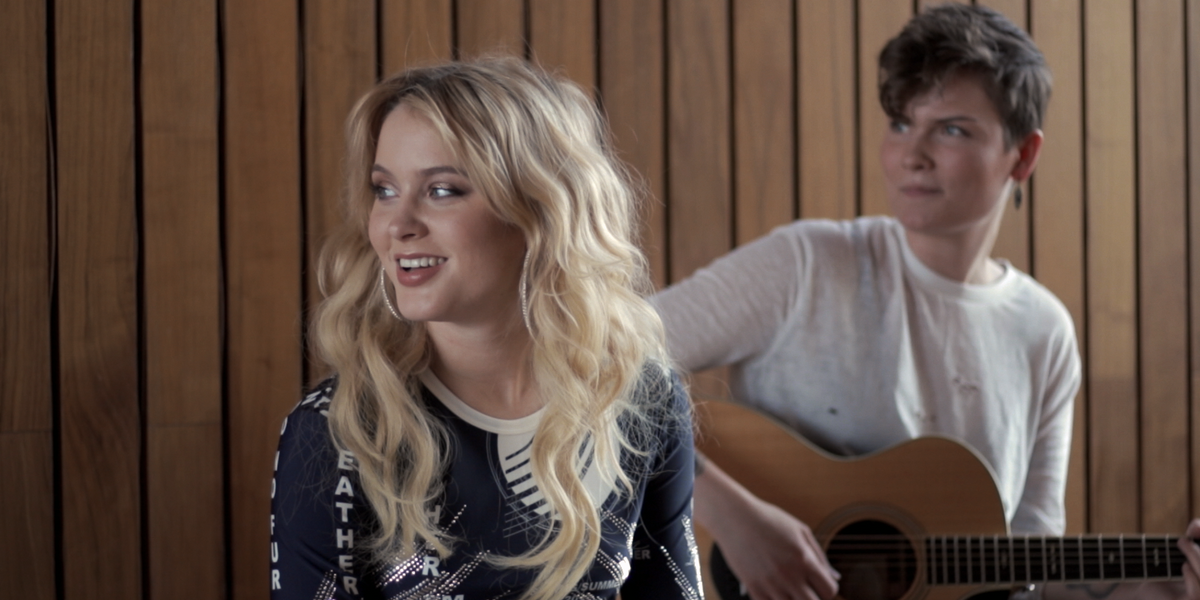 Zara Larsson Talks Feminism, High School and Why She Has No Filter

It's not often you meet a millennial who doesn't scrutinize their Instagram follow count daily, but Zara Larsson isn't your average millennial. In a hyper-mediated world, Zara Larsson is the celebrity that talks as if she's still living in the Facebook-status-era: She admits she hates men, she speaks on Dr. Luke, she talks Trump – and she's built the platform to be heard. Releasing music that's so good she named her latest album just that (So Good), Zara Larsson has amassed a fan base with the dedication reminiscent of those of 90s pop stars.

Let's not forget, though, multi-platinum recording artist Zara Larsson is still in high school. While her recent collaborations read like a VIP list to the hottest LA party (she just put out a track with Ty Dolla Sign), Larsson is still balancing the studio with studying. Despite the fact her song "Never Forget You" racked up over 300 million views and that her new single "Lush Life" has been heralded as the song of the summer, Larsson is still running off to a "leadership" test. If this is what we're seeing from Zara Larsson now, there's no limit to what she's capable of.

We caught up with the 19 year-old Swedish sensation to talk smashing the patriarchy and why she couldn't care less what you think about her. She also graced the PAPER Penthouse with acoustic performances of "So Good" (above), "Only You," and "Lush Life."

Hey, So Good is...I mean it's so good, which I know is why you called it that. Tell me about working with Ty Dolla, that must have been a dream.

Oh man, thank you. Honestly Ty is pretty much the one person that I've really freaked out about. Like I 'fan-girl'ed, but on the low. I don't think he understands what a big fan I am, he's really one of my favorite artists. He's so chill and calm and nice so I tried to be as calm as he was, I think I played it off pretty well.

I love it. Is there anyone else who would get you as excited to work with?

I would love Nicki.

Minaj? That'd be a great combo--you are moving into that RnB realm.

Right? I think so too! I mean also Kehlani, I would love to work with. Anderson Paak. Bryson Tiller. Charlie XCX would be cool--there are so many people. If I'm working with them though, I want it to feel authentic, like they want to do it. Not just like, "Oh we're going to pay you a hundred grand."

It must be so crazy to still be in high school and experiencing this kind of success. I can imagine it feels pretty counter-intuitive to be taking all these subjects when you're already so established in your chosen field.

I can't wait to be finished. You honestly have to have real discipline to do what you don't want to do. Like, I'm not going to college! I've known what I wanted to do my whole life. I'm just going to fully focus on my music. I've got lots of summer festivals coming up. I'm done.

I think, in general, Americans care so much less about looking cool. In America they scream and sing along. They're having more fun. Except in places like LA, where everyone is "cool."

So true. Do you feel like when you're in LA you have to buy into all that? You know, go out and be seen?

No, not at all, I would never be like, "There's this event right now, oh my god!"

Oh hell no, I can't stand that. There are so many of them in LA. So many people come up to me with like, you know, a couple of million Instagram followers, like, "We should do brunch tomorrow!" I don't know you. I don't want to have brunch with you! They think because they also have a lot of followers so we can be friends. No.

I know you've been super vocal about your qualms with how the world works, which has kind of earned you this "activist" title – especially regarding women's issues. How severe is the backlash from that? You're often called a "man-hater," is that frustrating?

It's actually not at all, because I kind of low key hate men. When people call me a man-hater I'm like, "yeah."

I don't think man-hating is feminism, but I do really support it, you know, I get why people hate men. Not even men, like the patriarchy. I hate that. It still exists because of men. Women are oppressed because of men. It's not a complete lie. People focusing on me being a man-hater is so fucking irrelevant, in my opinion. Who cares if I don't like men as a group? It's not a problem, it doesn't hurt anyone. I'm upset because the world hates women. Women are being raped by men, accused, murdered, harassed, discriminated. It's a natural reaction to be upset.

In that sense, what is it like to be a young woman in the music industry? Do you think people find it difficult to distinguish between you as an artist that deserves to be taken seriously and as a 19 year-old girl?

Definitely. So many times I've felt uncomfortable or like I've wanted to get out of there. Usually I'm the only girl in the studio surrounded by older men...it's kind of scary. It's hard to not be a man.

Has there been a specific situation that you've just thought, "Get me out of here"?

I was like, "What did you say? Did you just call Beyoncé Jay-Z's fucking accessory?" Then for some reason, he started talking about the size of his dick. In the studio. I was so uncomfortable.

That's insane. You've spoken about not having the best experience with Dr. Luke also. How often does that happen, when you feel like producers don't have your best interests?

I've definitely been in situations. For example in the studio one time, it was pretty late, there was like a party. I walk in with my friend, my girlfriend. They said to me, "We have a song, it's about girls and we want it to be sung by a girl." They played it and my friend and I looked at each other and said, "No, I wouldn't really say that as a girl." They turned around like, "Yeah you would, this is what you would say." I was like, hold up there are 10 guys in here. That's so common. Like they're writing a song for a girl about a girl but the only opinion that matters is that of a man. Someone will point out what I look like, which is why I always have someone in the studio.

Right, there must be so much discussion as well as to how you present yourself, how you construct your image, among these dudes.

How do you deal with that?

I don't. Sometimes you have to pick your battles. When you say I'm an activist, like, I'm not as much as I would like to be. I would love to be one, but I don't think I deserve to be called one. I used to write so much, like a lot a lot about women's issues. You get a lot of backlash. You get so much hate from anti-feminists, so I just had to take a break. It's ok to take a break. It's ok to say, "I'm just going to chill for a second" and back people like Zendaya and Amandla. It's very, very hard to constantly be surrounded by people that want to bring you down because people really do want to bring you down. You feel me?

Right, and so many artists would be content saying so much less than you've already said anyway. You talk about Trump. You get political.

Yeah that's true. Absolutely. That's who am I as a person.

Have you ever wondered how that might affect your career?

I mean no, I want people to know what I believe in and what I think. Of course there are artists out there that, like you say, don't speak up about anything, because they are aware they have fans that support Trump. If anyone chooses not to support my music because they like someone that discriminates basically against all the minorities in the world then that's fine. Human rights are more important than my career.

Watch Zara slay "Only You" in PAPER Penthouse below:

Special thanks to the Standard Hotel!