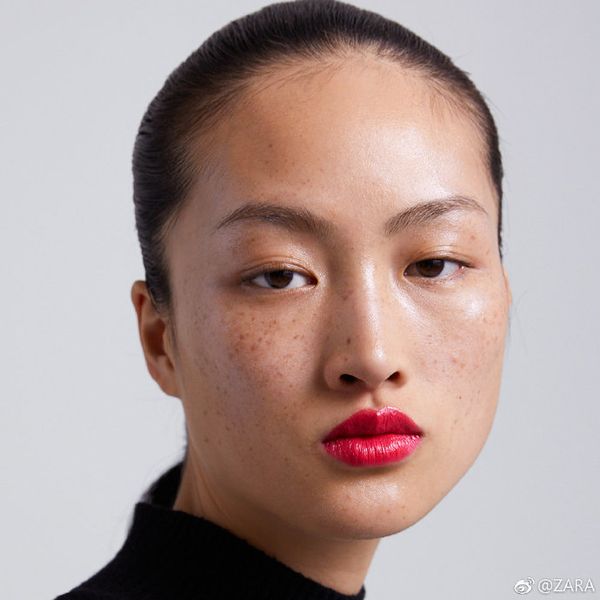 Zara Sparks Debate in China Over Model With Freckles

Fast fashion giant Zara has sparked a fierce debate in China after releasing a cosmetics campaign featuring a model with freckles. The model in question is Li Jingwen, professionally known as Jing Wen, and appears in a range of photos posted by Zara on Chinese social media platform, Weibo.

"I'm sorry, we Asian women don't have freckles. Even if we do, it's a small number of people. You must have tried very hard to find such a model," a user on Weibo said.

"I really want to powder the model," another added. Some miffed users claimed they'll be swearing off Zara altogether after the campaign. "After seeing this ad I have decided I will not buy any products from Zara. Not because I think the model is ugly, but because you are discriminating Asians' view of beauty."

There are also those who drew direct comparisons to the controversial Dolce & Gabbana ad that depicted a Chinese woman struggling to eat Italian food with chopsticks, raising questions of "cultural sensitivity" among Chinese consumers.

There are others, however, who have come to the defense of the retailer, claiming that China needs to come to terms with its own form of internalized racial discrimination. "Everyone's understanding of beauty is different," one person wrote. "In my opinion, Li Jingwen, who has freckles on her face, is really beautiful."

Although the freckles on Wen's face are completely natural, they're not as visible in Asian pop culture. China and wider parts of East Asia remain riddled with dated beauty myths with a sharp emphasis on "fair" and flawless skin. The widespread demand for skin lightening products in the country and a number of treatments to eliminate freckles further exemplifies the inherent prejudices women deal with.

Zara, too, has come to the defense of the campaign and in a statement given to digital news site, Pear Video, claims the advertisement was targeted at their global market, and not specifically at China.

"Our models are all photographed purely, the pictures aren't changed, and they're not modified," the statement said. "(This) is what she looks like, and the photos haven't been retouched. They were taken in a natural state."

In a 2016 interview with Vogue, Wen spoke about feeling insecure about her freckles and how it was strange to live with them in Asian society. "When I was little, I really hated them because normally Asians don't have them," she said. "In high school, I always tried to cover them, but now it's okay. I like them, and that's enough."

PAPER has reached out to Zara and Wen for additional comments.