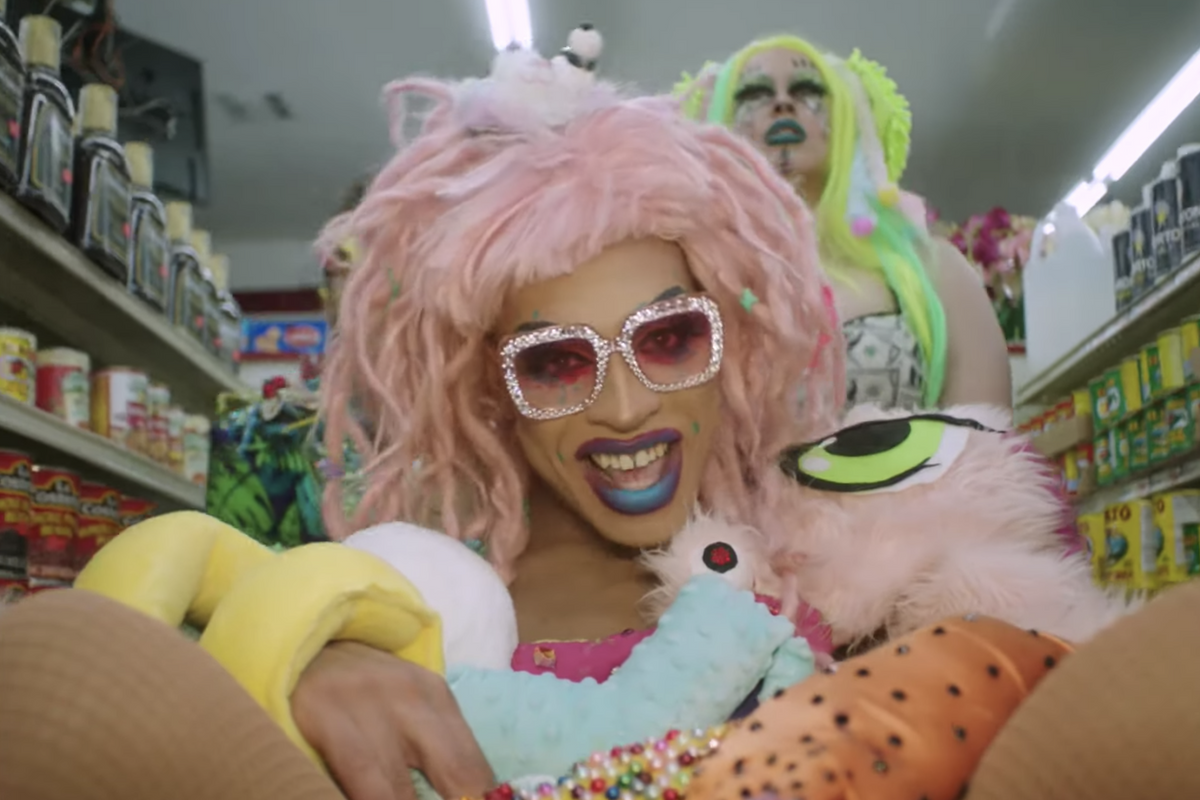 Yvie Oddly Rings in Her Win at the 'Dolla Store'

Last night, self-proclaimed "official oddball" Yvie Oddly lip-synced her way to the top, winning the coveted RuPaul's Drag Race crown. She faced off against the fabulous A'keria Chanel Davenport and fellow frontrunner Brooke Lynn Hytes, but ultimately won the crown for herself. Today, fresh off her big night and cashing that $100,000 prize check, she's premiering her new music video exclusively with PAPER.

The song, "Dolla Store," is a resoundingly queer response to Macklemore's 2012 radio success, "Thrift Shop," complete with bumping bass hits and bars that would give Macklemore a run for his money. Instead of used fur coats and flashy jewelry, though, Oddly is looking for all she can get for a buck, specifically calling for a BBQ Lays revolution.

In the music video, feathers, faux fur, and frizzy locks fill the aisles of a dollar store where Oddly and her crew are wreaking gay havoc on every soda bottle and chip bag in sight. There's even a signature Yvie Oddly backbend, continuing the epic new dance trend she began on Drag Race — although I don't know many people besides Yvie Oddly that can walk like Linda Blair in The Exorcist.

PAPER talked with Yvie Oddly, who has now joined the Drag Race royal family with Voss Events and manager Brandon Voss, about premiering "Dolla Store" and the experience of filming the video.

Who, or what, inspired "Dolla Store?"

"Dolla Store" is really a parody of some of my favorite rap music. It's inspired by the bravado of rappers who brag about their luxurious purchases and lavish lifestyles, but set in the context of a dollar store because it's where some of my favorite drag has come from. I wrote this song after I got back from filming Drag Race and taking a trip to this new, fancy, dollar store that opened up by my house. For the first time in my life I felt like a baller so I wanted to celebrate that.

Did you always want to do music after Drag Race?

Growing up I had always thought about making music, but I had convinced myself that I wasn't musically gifted so I never believed I could. Drag Race really showed me that I don't need to take myself so "seriously," so I threw away those reservations and made this track.

Your fellow cast members look really fierce too — are they your friends? Collaborators?

This video is chocked full of characters. I've got my drag daughter, Neurotika Killz, as well as my drag husband Captain ButtPirate Morgan. I got to work with some of the dopest dancers AND a slew of truly amazing Oddballs!

Where did you shoot the video? What was the process like?

We shot the video at the Dollar Mas in DTLA. It was such a fun experience because we really pieced together all of the elements I wanted in this video and got to goof off while making them. The cast was great, the crew was great, and the director is great so I couldn't have enjoyed the process more.