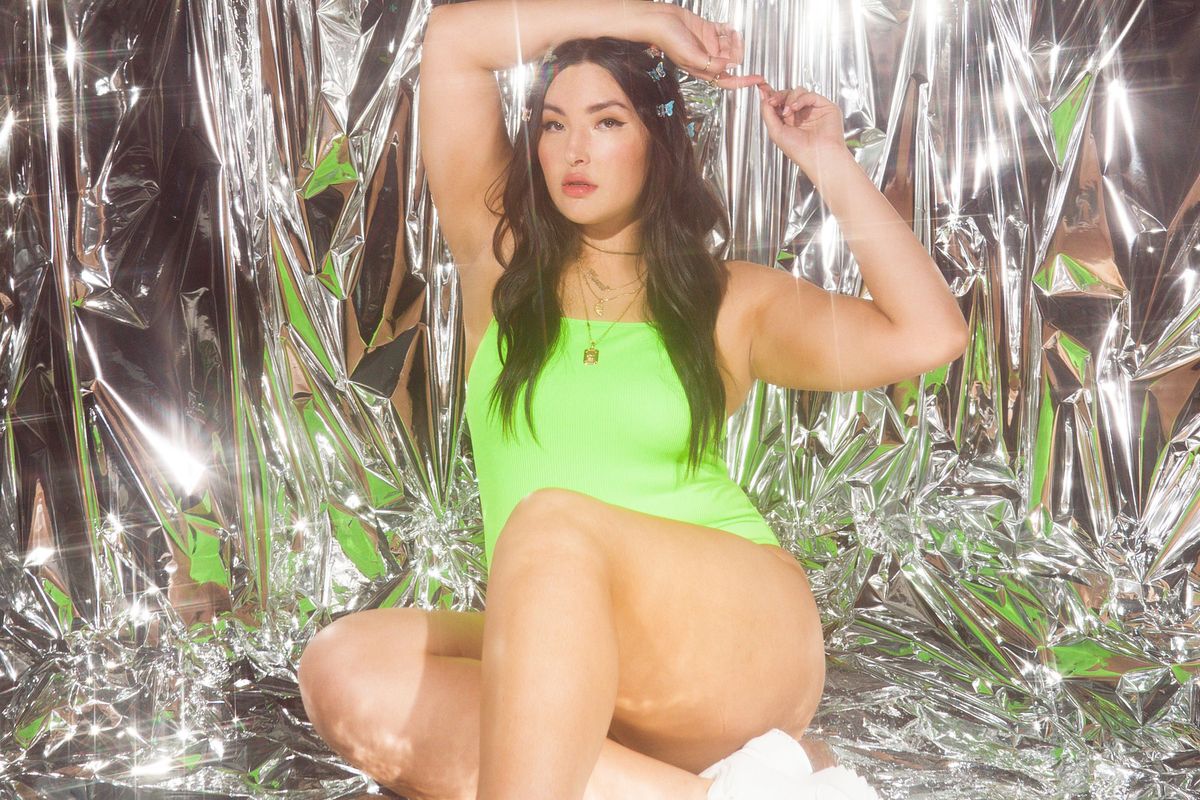 YUMI Is Done With Fitting In

The past year has been great for Asian representation in entertainment, marked in large part by Crazy Rich Asians (2018), the return of Sandra Oh, and lead roles for actors like John Cho and Henry Golding. Now, model and singer/songwriter YUMI wants that diversity to translate into the music industry not only in terms of being Asian, but playing more into her identity as a plus-sized Asian artist.

For this year's International Women's Day celebration, Forever21 has launched their new "Forever Female" line, celebrating diversity and women in the music industry. This was a chance for both YUMI's modeling and music industry worlds to intersect. The artist, as well as her latest single "Camouflage," are featured in the fashion brand's campaign, along with Gabby Barrett , Dounia Tazi, Ari Lennox, Kassi Ashton, Bia, Madds, Chloe Kohanski, Natti Natasha and Margie Ashcroft.

"The campaign is really diverse on every level, and I know these women have experienced what I have in their own ways, their own narratives," YUMI tells PAPER. "I think that this campaign is showing that all women that they're beautiful, and that our differences are our power. The campaign is all about positivity, and embracing being a woman, and being powerful in loving yourself — and that's also at the core of 'Camouflage.'"

PAPER talks to the artist about her journey of coming to terms with her identity, and representation in both the modeling and music industries.

Can you talk more about "Camouflage"?

I wanted to write a song of empowerment, going through my identity struggles and self-love struggles. The two biggest insecurities in my life were being plus-sized and being Asian, and sometimes both at the same time. The first verse of the song talks about being plus size and bigger, and not fitting into conventional beauty standards. And then the second verse of the song talks about being Asian in an all white area, and how people treated me because they weren't accustomed to Asians. I was the only Asian kid in my middle school, and they let me know by calling me by racial slurs. At the time, I was making light of it because that's all I knew. When I moved to California, it was more culturally-diverse, but I still felt the pressure of leaning towards more white beauty standards because I've grown up believing that I wasn't attractive or desirable.

The first and second verses combine to show how these things were my weaknesses and insecurities at one point, but the chorus and the name of the song talk about how, now, I'm done trying to be like everyone else. I'm embracing those weaknesses and making them my power, because it's our differences that make us unique.

"I'm done trying to be like everyone else. I'm embracing those weaknesses and making them my power, because it's our differences that make us unique."

When would you say you came to terms with embracing your uniqueness and flaws — the things you used to see as your weaknesses?

Embracing my body came first, because I just had this revelation when I was in Hawaii two years ago. I don't want to be 80 years old and remember my life as someone who's too scared to go under the water because they don't want to wear a bathing suit. I want to live the fullest, happiest life I can, and I was just tired of carrying that weight of hating myself.

What about your issues with being Asian?

I later acknowledged my issue with being Asian, because it was something that I shoved down for a long time. But then, I discovered the deep root of that problem when I started modeling again in 2016, and I started seeing the lack of diversity in the plus size industry. We have almost every race on board, except for Asian culture. I've grown really passionate about being the representation for being a plus size Asian, because that's something that Asian culture doesn't feel passionate about supporting. You don't even have to be plus-sized and Asian to feel the pressure of being small in Asian culture. I've never lived in Japan, but I felt this from my family growing up, from my mom's side, from my elders. They grew up under that size 2 beauty standard. Even some of my Asian friends who are so skinny and so tiny say that, "Yeah, my grandma and my aunt told me that I look fat today."

So we deal with this pressure still from that side of things. I never experienced an Asian role model growing up saying it was okay to be bigger than what the culture says you should be, and that beauty comes in all shapes and sizes. I would like to be that representation and role model.

What's it like producing work that talks about such personal things?

It can be painful, and can make me feel vulnerable, because you're putting a part of your personal journal or diary out into the world for people to hear. Sometimes they're about specific people, too. So you can't help but think, "Oh, are these people going to find out?" You make yourself vulnerable sharing art, in general because it's an extension of you. But at the end of the day, it's really beautiful to feel connection to people relating to what you create because it comes from such a deep place. Hearing people say, "That really helped me through this" makes it so much more worth it to put it out there.

"I never experienced an Asian role model growing up saying it was okay to be bigger than what the culture says you should be... I would like to be that representation and role model."

How important do you think it is being a plus-sized Asian both in modeling and music?

I think in modeling it's easier because there's already a community built for people like me, and it's very supportive and strong. But I think being Asian sometimes, it's more difficult to get certain roles, and it's out of my control. There's still a lack of representation.

What do you want to do next?

I would love to play at a big festival, I would love to tour. I want to do everything. There's no specific thing. Right now, my biggest goal is to put out music and talk more about stuff like this, and things that I feel strongly about and want to be vocal about. My goal is just connecting with people more this year, those that support me. I would love to collaborate with brands more for messages that I stand strongly behind.

Listen to "Camouflage," below.