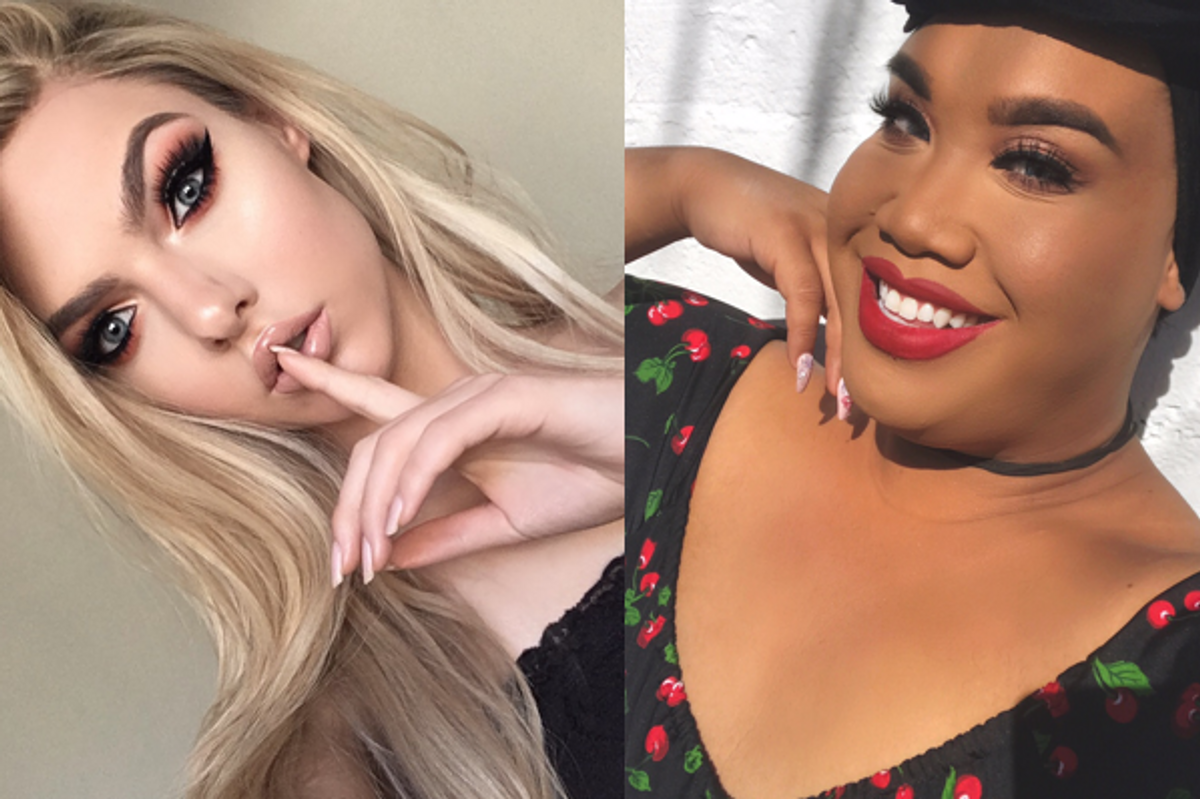 Vlogging has long been a way for those who feel invisible to be seen, while helping others operating within marginalized communities. LGBTQ millennials have thrived on social media since its inception, and are continuing to inspire and represent those coming to terms with their identities — particularly those seeking to alter their outside appearance to reflect their inner selves.

Queer beauty vlogger Patrick Starrr, trans make up guru Alex Chaudoir and body positive-blog lesbian queen Brittney Keating are among those leading the charge in the battle for self-acceptance — and their followers love them for it. PAPER reached out to each star to find out the ups and downs of fandom, if there's such a thing as oversharing and their responsibility to the LGBTQ community. Of course, we also asked for a sexy selfie.

How important is it to you to use your platform to advocate for the LGBTQ community?
If somebody openly identifies within a community, I think that in itself is advocating via means of representation, which is crucial. I've found within my platform that my power to advocate within the LGBTQ+ community lies within expanding this representation by adding my own experiences to the pot as well as opening the community up for even more inclusiveness. This is important to me because from what I've observed, a lot of people struggle to follow their true paths, especially when there aren't communities there to lift them up and over the road blocks. The LGBTQ+ community can be that spark of light somebody may need to gain momentum and empowerment with who they are in their own lives which is why advocacy is imperative.

Can you recall a time when you felt you revealed too much to your audience? Are there parts of your personal life you refuse to share?
I am a pretty open book and I enjoy sharing certain details about my life when I feel there is value to give to others through the message or learned experiences. I would never, however, compromise somebody's identity.

Describe your favorite fan interaction.
It's really hard for me to choose a favorite because each interaction is meaningful in its own way. Fan, or as I say "fam" interactions that stand out the most to me are those that I've had while at different music festivals. When I was at Life Is Beautiful in 2016, I remember a girl whose boyfriend yelled out my name to get my attention when they saw me walking by because he knew she was too shy to say hi and that she really wanted to meet me. I thought that was really sweet.

I also remember running into fam at CountDown NYE 2015; she had made me a bracelet (what we refer to in the rave community as "kandi") which said "Love You First" because self-love was one of her biggest takeaways from my content/message. That spoke to me and reassured me that I am on the right path. Fam interactions are my favorite part of doing what I do (unless it's a creepy guy chasing me down in the women's clothing section of a store...this has happened).

What advice would you give to those dealing with online trolls?
What somebody else says about you does not dictate or represent who you are – only you have that power. Each living and breathing person has an opinion and you can't please everybody, nor are you expected to, so focus on staying true to yourself and your own potential. Remember that you are not alone and can/should report any online bullying if you know where the source is coming from. Somebody's negative opinion toward you is just his or her own darkness being triggered by your light. Light always outshines the dark. If that doesn't work, do as Beyoncé says: "I twirl on them haters."

What's the most extra thing you've caught yourself doing for the gram or a video?
I was recently driving around looking for a spot to take some pictures by the water and I came across this house in the nearby neighborhood which had a sidewalk covered in beautiful rose bushes. With no shame, I pulled my tripod and my camera out of my car and set it up on the sidewalk to take pictures and video footage with some random person's flowers. One of the neighbors came walking by with her dog, also admiring the flowers and asking me if I was taking new profile pictures, so I'm thinking this wasn't an uncommon thing for people to do, but it was pretty uncommon for me. Worth it, though. Do it for the 'gram.

Can you recall a time when you felt you revealed too much to your audience? Are their parts of your personal life you refuse to share?
I am an open book. I believe life opens up when you do.

What advice would you give to those dealing with online trolls?
Ignore the HATERS! They are your biggest fans. Think about it...they took the time to watch 6 minutes and 35 seconds into your video to process a thought and click the comment box and write a feeling. I just thank them for the views!

Show us the craziest DM you've ever received.
My mom would kill me if I showed you!

What's the most extra thing you've caught yourself doing for the gram or a video?
I think the craziest thing I have done online was duct tape my head for a drag queen tutorial early on in my channel....IT WAS FIERCE.

You can only use three beauty products for the rest of your life, what are they?
Lip balm, concealer, and bronzer...the worst feeling is dry lips.

Send us a sexy selfie.

How important is it to you to use your platform to advocate for the LGBTQ community?
I've never really seen myself as an activist but over the time I have realized how much just being myself, being open and honest about my journey as a trans woman is important. It humanizes and in a way normalizes one part of the queer experience to my straight/cis audience and also shows my trans sisters or any queer kids that we can be successful and happy. That we can make it in this world.

Can you recall a time when you felt you revealed too much to your audience? Are their parts of your personal life you refuse to share?
So far I haven't shared a lot about my personal life on the Internet. I've been very vocal about my transition and people have watched me: before, during the questioning phases and then now. I actually would like to start sharing more with my audience, get them to meet the person behind the selfies a bit more. I don't think there's anything I wouldn't want to talk about, maybe keep my relationships on the down low until I find my husband.

Describe your favorite fan interaction.
This one is so unexpected and just hilarious! It was last year. I was using public transportation and I noticed this girl sleeping for a while. When we arrived at the last stop she was still dead asleep, so I decided to wake her up and let her know we hit the terminus. She woke up super confused! She was staring me down and her face totally lit up! As I was starting to walk away she screamed my name. She told me she loved my videos and she couldn't believe that just happened! We took pictures and even had a little conversation! It was so cute because it really was the last place I would've expected this to happen, especially some random person I had woken up!

What advice would you give to those dealing with online trolls?
I recently had a friend and fellow influencer ask me this question. The generic, while very true, answer is to just remember if they're trying to drag you down, they're already below you and their behavior reflects a lot more about themselves than you. So don't feed the trolls, delete, block and move on. But in some case, if it goes too far and it's getting to you, it's ok to just disable the comments, take a break. A lot of people don't realize how much hate online can affect someone.

Show us the craziest DM you've ever received.
So obviously there are the usual DMs from guys thinking they have a chance, the random dick pics. Those seemed kinda crazy at first but you get used to that.

One thing that always will seem crazy to me is when I got people sending me messages telling me to kill myself. I will never get over the fact that people can be filled with such hatred.

What's the most extra thing you've caught yourself doing for the gram or a video?
So last time I went to Disneyland with some friends that also happened to be influencers. I was too lazy to do a full face of makeup but I still wanted to stand out in the snapchats or vlogs so I decided to cover my whole face, hair and any part of my skin showing in chunky gold glitter. I was definitely the most extra in the whole park that day. It was very itchy but worth it.

You can only use three beauty products for the rest of your life, what are they?
Definitely highlighter, fake lashes and concealer.

Send us a sexy selfie.


All images courtesy of Keating, Starrr and Chaudoir.