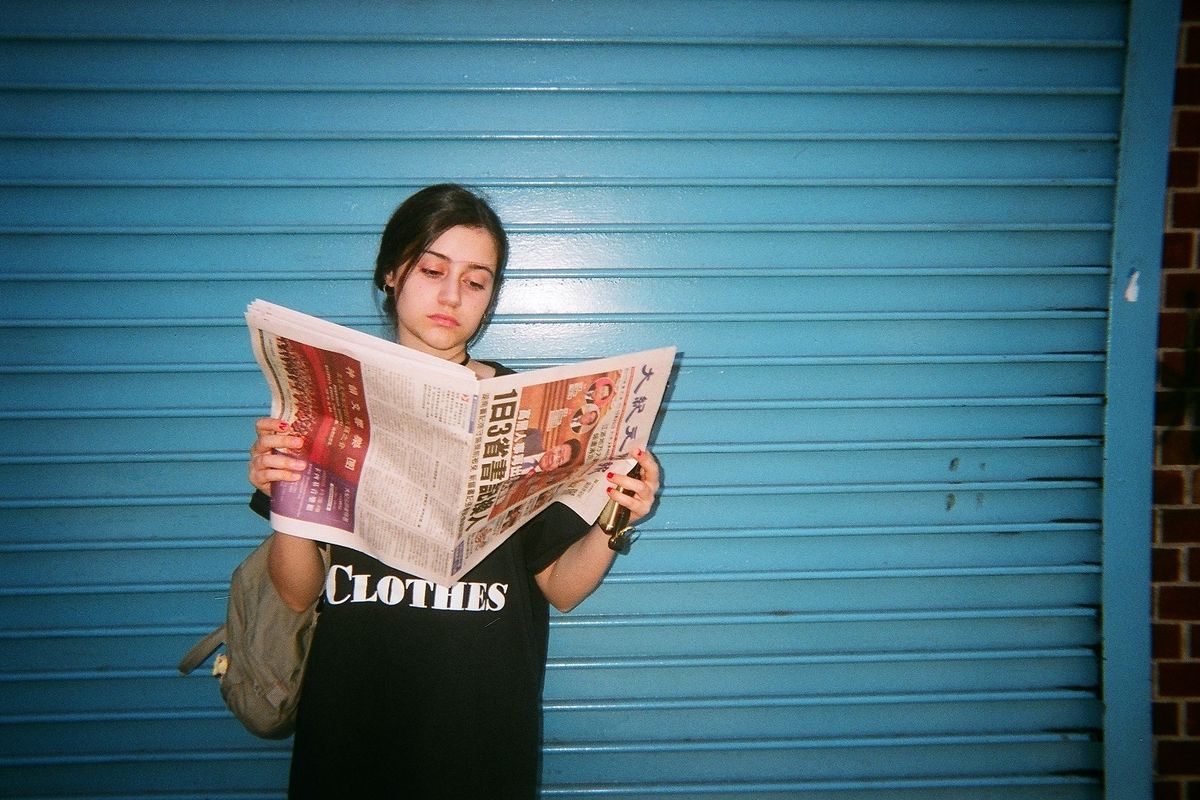 YouTube star DANABaby on the Death of Vine, Working with MTV, and the Allure of '00s Pop Culture

DANABaby isn't sure how she got here—she's just glad that she did. The 19-year-old Vine-turned-YouTube-turned-every-social-platform star and Philadelphia native is a sort of unusual teen 'net sensation: Her humor is typically drier than that of others. Consider her the Aubrey Plaza of this teen social media universe. Instead of sticking to one form—an intimate, personal vlog or complicated film edit, she does both—all while remaining true to her deep love of '00s pop culture, New York, and goofing off with her friends.

We caught up with the teen talent to find out how Vine's shuttering impacted her, working with MTV, and the power of creating for yourself--and only yourself.

Your story starts with Vine. How did you get into the platform?

I've been using the internet for the longest time. I actually started on YouTube, but I didn't have very much of a following. Then Vine came out and I thought it was really interesting and funny because it linked up with Twitter and I was on Twitter a lot. I saw them a lot [on Twitter]—Tyra Banks' vines and stuff so I made an account. I used it more like a vlogging outlet. I filmed what was happening in the moment. Over time, I gained a following. It's something that I'm still pretty confused about.

When did you start to pick up traction? Did you have a single Vine that performed particularly well?

That's another thing—Vine came out in 2013. I downloaded it within the first month. There was no particular Vine…usually it is with somebody [who gets famous on the platform]. It was just at once—a few [Vines] were picking up, and then I noticed most of them were.

I was really into animation and stop motion—I still am. Part of my Vines were that. Then, I was also doing a thing where I was just talking [to the camera]. It was just something fun.

With Vine, I would throw whatever I could up there. With the edited ones, those are the ones I like to work on. I really love editing, so why not take advantage of the feature where I can upload from my camera roll and post what I like? I didn't want my account to just be quick videos that I didn't put any thought into.

That makes you distinctive—there are people who've found social media fame by sharing those quick, easy posts almost exclusively. How do you feel now that Vine is dead?

To tell you the truth, I kind of stopped using it a little bit a while ago. Not because I thought it was dying, but because of school—I became busy and it wasn't a priority. It wasn't a priority when I first started but I felt obligated to use it more, because others were. One thing I never did was create just because of the following or because people were asking me to. I always did it because I liked doing it. With Vine ending, I was really sad, because I was worried about where all the Vines were gonna go—I didn't want to lose all my content. I made a lot of friends on there. It did help me out a lot, so it was sad seeing it go but I'm ready to do other stuff.

When I had Vine I realized I should put more things on YouTube, the kind of stuff I put more time and energy into making because now I have more people who will watch. I really don't like the sit-down type videos, just talking to the camera. I feel like I can put a lot more effort into something. I recently put out something that was a lot different from my past videos and people liked it.

On Halloween night my friend Jake and I made a video—there were no words to it, really. We put together what happened at 3 A.M., which is the witching hour. We went over to my elementary school and all these weird locations and filmed clips of us with makeup on and fake blood. I threw together this creepy montage. It was pretty cool.

I know you're in school now—are you studying film? Is that what you want to do?

Right now I'm studying communications but next semester I'm going to do more film. I really just want to go in the route of film/television. I still like animation--anything creative. An art director, maybe?

You did some behind-the-scenes stuff at the Video Music Awards this year and last. How did you link up with MTV?

In 2014 I went to an event called Playlist Live Tri-State. I have a friend who works for MTV who came across my videos and like them. We followed each other on socials and became friends. She was at the event, and her boss wanted to meet me because she showed him some of my stuff. He met with me and said he'd like to work with me on future stuff. From then on, he's been reaching out to me when he has something he thinks I'd be into/would like to help him with.

Would you ever consider pursuing acting?

I'm much more interested in voice acting. It would be awesome to be the voice of a character. I really look up to Rebecca Sugar, the first female creator of an animated TV show on Cartoon Network. She not only created it, she's also a voice actor and writer. She does it all. I think that's so awesome. Her show is called Steven Universe.

Based on your Instagram, you're really into a late '90s to mid-00s aesthetic—everything from No Doubt to the Paris Hilton/Lindsay Lohan days. What about that time period are you drawn to?

It was just a simpler time, to me. I loved the drama. There was so much going on, so much commotion. Today, when you find things out you just have your phone--you open Twitter and you know what's going on. I think the films were better and the stardom was much more interesting. You had to find things out through tabloids. There was just a lot more to it.

Before you became DANABaby you were Dana Too Turnt. Why the name change?

I started with that user and I didn't even come up with it myself. My friend had a fan account for a member of One Direction. I liked it and I chose that username. In 2014 or 2015, I grew to not like it. My current username, DANABaby97 is meant to not be serious. It sounds like an AIM username.

Do kids ask you how to become a successful Internet personality? And if so, do you have advice you typically give them?

They do and I usually tell them—and I know it sounds to cliché—but to be yourself completely. There are so many people on YouTube or whatever social outlet who do the same exact thing as each other. It doesn't really make you stand out. Create what you like and not what is trendy or happening at the time. Don't focus too much on your numbers or how many subscribers you get in a week. Create to create and not to create a following. That's not even half of the reason I use the internet. I use the internet because I was really bored and at a time where I didn't really have a lot of friends. Just be yourself, that's all I can say.

That's awesome! In line with being yourself, what music are you into these days?
I really like Grimes. I love her Art Angels album. It's one of my favorite albums. I really like Aly & AJ. Whenever people bring up "Potential Breakup Song," I really encourage them to listen to all their other stuff because it's all so good. I really like Gwen Stefani, she's my favorite. She's been my idol since forever.

You're a really busy person but when you have some down time, what do you like to do?
I'll usually take trips to New York, being that I'm from Pennsylvania and it's only two hours away. I'll hang out with friends. We'll usually do karaoke, go out to eat. When we're in New York, we honestly don't even need to be out eating or anything. We can just prance around the street and be stupid and have fun.