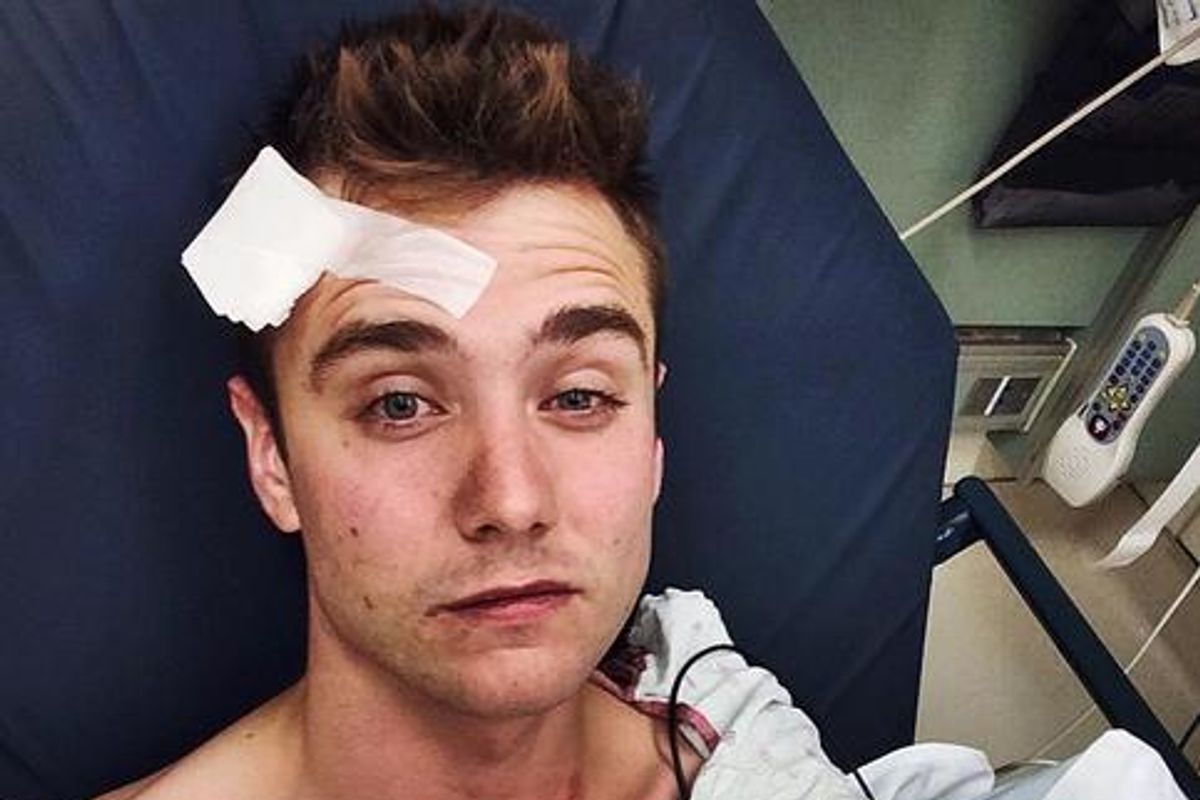 UPDATE: Calum McSwiggan has written a lengthy Facebook post regarding the allegedly staged gay bashing he suffered on Monday night in West Hollywood.

In the post, McSwiggan admits he injured himself at the police station to get out of paying $20,000 bail and to avoid remaining in custody until his court appearance yesterday (June 29th).

One of the three men who supposedly attacked Calum has also come forward, asking people to not "threaten" the star on social media, but, indeed, refutes his story, and asks him to apologizing for involving he and his two friends, and for vandalizing his friend's car.

Here's one to make your skeleton rattle for a few days:

McSwiggan, a UK native, was in Los Angeles for "VidCon" which is where social media scions from all over the world converge to take seflies with each other with their mouths ajar in feigned surprise.

Tuesday morning, McSwiggan posted THIS photo on his Instagram, showing him in a hospital gown, and looking "battered."

...he claimed that three men jumped him outside a WeHo nightclub, after he became separated from his friends; according to him, he has three broken teeth, and stitches in his head.

All I see is some toilet paper taped to the corner of his scalp and a pair of drunk eyes...but maybe I'm lacking perception.

Also, who takes a selfie from a fucking hospital bed?

WELL, the police department, which he claims treated him like a "second class citizen," is calling bullshit on the whole thing.

The sheriff's department released a statement, saying McSwiggan was actually arrested for vandalizing a car, and booked.

The most disturbing detail is that police observed the "LGBT + Lifestyle YouTuber" bashing his OWN face with the handle and receiver of the prison payphone, ostensibly to generate some evidence of injury; he was promptly taken to the hospital from the station.

That is one way to do the "one phone call" bit!

Fellow 'Tubers who were with him that night, are vouching for him, including Melanie Murphy (who????)...

None of us have spoken fully yet about yesterday's events/ @CalumMcSwiggan's attack & the aftermath, so please don't form opinions til then x
— Melanie Murphy (@melaniietweets) June 29, 2016

...who posed for a photo with McSwiggan the night of said-assault, stating "With my gays."

McSwiggan had only this to say:

I've been told to say nothing before court tomorrow but staying silent here is killing us. If you're a friend just DM me for the truth.
— Calum McSwiggan (@CalumMcSwiggan) June 29, 2016