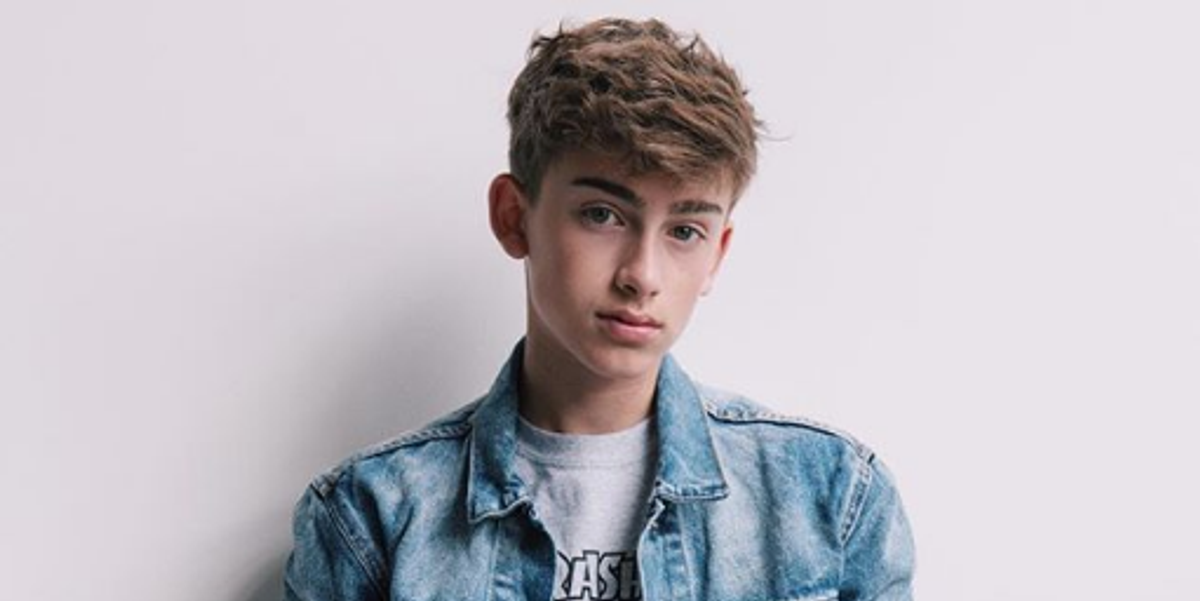 The age in which social media celebrities get their start is getting younger and younger—especially for those who come from a family lineage of it (yes, people, we're already at that point). Johnny Orlando, a 14-year-old YouTuber-turned-musician from Toronto, Canada fits that profile—he found social superstardom at just eight years old when he began posting cover videos with older sister Darian. He now often collaborates with his 12-year-old younger sister Lauren, but has been making a name all his own. From posting Taylor Swift and Shawn Mendes covers that rack up nearly 40 million views each to working on his own music, Johnny Orlando has more than just the perfect name for teen pop stardom—he has the talent.

We caught up with Johnny over Canadian Thanksgiving (thank you, Orlando family, for giving us your time!) to learn about what it's like to work with your family, making the transition from cover YouTuber to original singer/songwriter, and just what the future holds.

In this series, we spotlight young people who've found success online and have used that fame to create real careers. Your story begins with YouTube. Before we get to that, we're curious: Have you always been interested in social media? What was the first platform you joined?

The first social platform I ever joined was YouTube. At that time, I was eight years old and had never had any other social media accounts. My sister [Darian] helped me make my YouTube channel and start making videos.

Did she ask you to collaborate, or was it more of a mutual interest? Do you both just love to sing together?

We both always had an interest in music and my sister really liked to make videos so it was kind of like a perfect partnership. She wanted to do the behind the scenes stuff and I wanted to sing.

You often collaborate with your family—what's the benefit of doing so? Do you like it?

Almost everything is still managed within my family, which is really awesome. It's super fun for us to all do together. My younger sister, Lauren, and I like to make videos together, and she hosts my tour which is really fun, because I always have someone to hang out with on the road. It's great that we are able to keep most of this within our family, because I know they will always have my back.

When did you start singing? Have you always had a love for music?

I started singing when I was around six years old. I did a few musicals at my school and then started singing on YouTube when I was eight [with Darian]. What really started my love for music was all of the music my dad always had playing around the house. He played all different genres which has really shaped my personal sound.

When did you start posting videos on your own channel? Was it your idea to branch off and kind of do your own thing?

I started posting videos on my channel at the beginning, when I was eight. We originally started off by doing covers, which allowed me to build a fan base, but now I'm able make my own original music. It's so fun!

How do you determine what songs you want to cover?

We usually would look at what songs were popular at the time, or just a song that I really loved.

Along that line: what makes a good cover video?

Definitely a video with a story. My most popular covers are the ones that we put a lot of time making and creating a story line for such as my cover of "Stitches" and "Bad Blood."

Did you have a specific video go viral, or has your success been more gradual, gaining more followers and fans over time?

I never really had one viral video that sparked all of my success, it was definitely more gradual. It really started to pick up in 2016, when I started touring with MAGCON and branching out to other platforms such as musical.ly. I had a few videos that went really viral which definitely helped, like my Shawn Mendes "Stitches" cover which has almost 40 Million views now!

When did you first realize that you were onto something, that people really enjoyed your channel?

For sure the feedback I received from all of my supporters was crazy and very overwhelming. As my channel started to really grow, I definitely noticed the increasing demand for more content and music from my fans. This all really started to pick up at the end of 2015.

When did you start posting your own original music? Do you write most of it?

I made a few originals starting in 2012 but I didn't really start to take it seriously until summer 2016. In June of that year I released my single "Let Go," which we spent a lot of time writing and producing to make sure it was up to par with the music you hear on the radio. I co-wrote that song, but since then I've gotten a lot more involved in the whole process of making a song from start to finish. This summer I spent a few months in the studio writing and recording four new songs, which are coming out very soon!

What was the first original song you posted? How did it go over? Were you nervous?

The first original song I ever posted was my single "Summertime." At that time, I was only 9 years old so I have definitely improved since then, ha! I was a little bit nervous, but at that time I was just having fun and not taking anything too seriously.

Have you always known you wanted a career in music? It seems like the natural progression but some people never graduate from posting covers. You made a brave leap by doing your own stuff!

I'm from Toronto, Canada, so like most boys I wanted to be a hockey player before I started all of this music stuff. When we first started, it was really just for fun. I never had any intention of this being my career. As things started to pick up and progress I really fell more and more in love with music and I'm so grateful that I'm able to do this full time now. Making original music is so much fun and I'm so glad that I have this platform to share my sound with.

Do you have any plans to release an EP in the near future—you said you have four new songs ready to go, after all.

Originally we were going to put the music I recorded this summer into an EP, but I think that our plan now for this year is to put out a bunch of singles, so that I am still able to explore my original sound and collaborate with different artists and writers.

What about touring? What's next for your career?

I've been on a co-headline tour with Mackenzie Ziegler since last May which has been so much fun! We are heading to Europe in December to do a full run over there! Touring is one my favorite things. I love meeting my supporters face to face, travelling to new places and performing my music live!

Last year you released a song with Mackenzie Ziegler, "Day & Night." How did that come to be?

My producer connected the two of us and helped us create the song, which was a super fun experience. That was my first time doing a collaboration with another artist, which I definitely want to do more in the future. Mackenzie and I have become really good friends and are now touring together so it was definitely a really great connection.

How do you balance school and music/YouTube? It's certainly a lot of responsibility for a 14-year-old!

It's very difficult because I have to miss school a lot for traveling, recording and touring but the responsibility has really helped to keep me disciplined and focused. Education is very important to my family and I, and will always come first before anything, but my family is very supportive and always helps me to keep everything balanced.

You have nearly 2 million subscribers on your YouTube channel now, and nearly 1 million on your Vlog channel—what's your secret? How frequently do you post, and how do you keep your fans engaged?

I actually just hit 2 million subscribers a few days ago which is so surreal to me, because I remember when I was so excited about hitting ten thousand and one hundred thousand subscribers. It's crazy how everything came about in only a few years and it's all thanks to the dedication of my fans. They really motivated me to continue to post videos even when I was getting a lot of hate, and I'm super glad I did.

Consistency is definitely the key when it comes to growing your fan base. I use to post vlogs once a week and covers about twice a month, but as my schedule has gotten busier I haven't been able to post as much. I still try to post a few times a month between my two channels, and I also stay super active on other platforms like Instagram and Snapchat so I can stay engaged with my fans.

I'm sure you get fans asking you for advice all the time. When they ask how they can do what you do, what do you tell them?

I always just tell them to work hard, ignore the hate and stick with whatever they're passionate about. There were a lot of times where I considered quitting music and YouTube all together when it got to be too much, or when I was getting hate, but I'm really glad that I stuck with it. Nothing happens over night, it takes a lot of hard work but it's definitely all worth it in the end. Anything is possible.

Because this is a teen-centric series, we like to end these with teen-centric questions. What have you been listening to lately?

I've really been getting into Post Malone's music recently. His new song "Rockstar" [with 21 Savage] is definitely one of my favorites, and also Noah Cyrus's new music. I really love her style, I think it's really unique and different. One of my all time favorite artists is J-Cole, I'm constantly listening to his stuff.

Watch any good movies or binge anything on Netflix?

My favorite show to watch on Netflix is definitely The Walking Dead or Stranger Things.