by Abby Schreiber
PAPERMAG
20 August 2013
There must be some body glitter in the water because all of a sudden our favorite late '90s music groups are getting back together! Backstreet's back (alright!), Destiny Child played the Super Bowl and now *NSYNC will be reuniting for a performance at the MTV VMAs this Sunday. Before you tune in, freshen up on what the guys have been up to since we last saw those sweet, sweet syncopated dance moves. 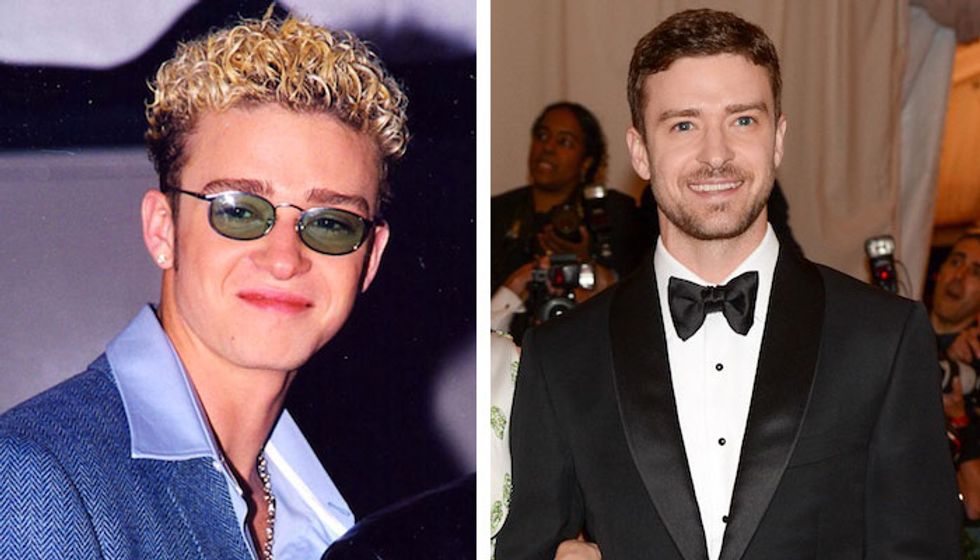 (Photo on the right by Julian Mackler/BFANYC)
Justin Timberlake

Post *NSYNC Career Highlights: He's released three multi-platinum solo albums -- Justified (2003), FutureSex/LoveSounds (2006), The 20/20 Experience (2013) -- and has a fourth on the way; he's had well-received acting roles in The Social Network, Friends With Benefits and, obviously, "D*ck In a Box"; and created a clothing line, William Rast, in 2005 that's had a surprisingly long (if recently under the radar) tenure. JT's also invested in restaurants (because of course he has) starting with L.A.'s now-closed "1930s Shanghai-meets-Blade Runner" dim sum palace, Chi (R.I.P.), and, more recently, Southern Hospitality, an NYC BBQ joint that's probably giving Guy's American Kitchen and Bar around the corner some (not so) healthy competition. 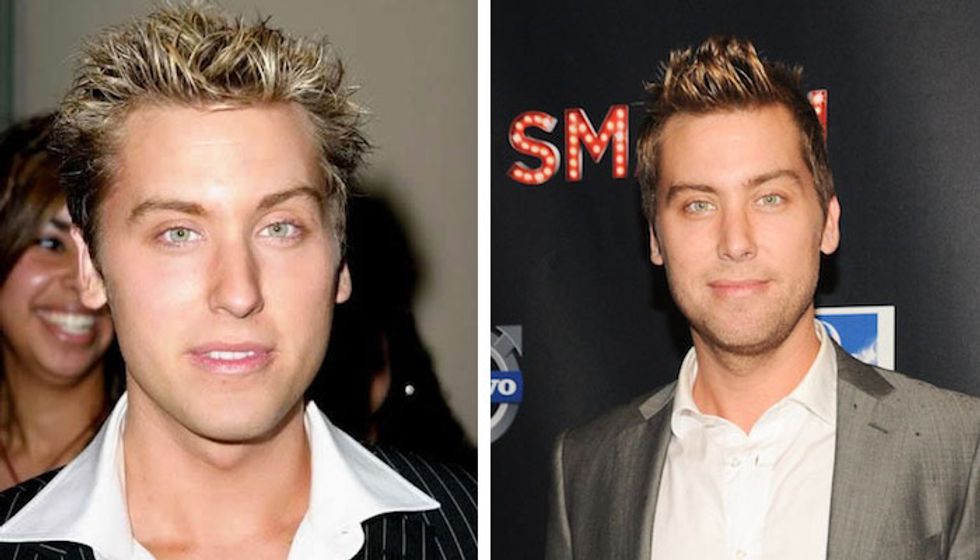 (Photo on the right by Joe Schildhorn/BFANYC)
Lance Bass

Relationship Status: Since coming out in 2006, Bass has publicly dated some pretty foyne-looking guys including reality star Reichen Lehmkuhl and, currently, this dude.

Post-*NSYNC Career Highlights: Who can forget On the Line? (Don't answer that.) Aside from appearing in that 2001 flick, making a cameo in Zoolander and competing on Dancing With the Stars in 2008, Bass has a string of forgettable IMDB credits that include a role in I Now Pronounce You Chuck & Larry and voicing a character on Disney Channel show Handy Manny. In 2007 he had a six-month run on Broadway as Corny Collins in Hairspray. Also that year, he wrote a memoir, Out of Sync, which, believe it or not, debuted on the New York Times Bestseller List.

Memorable controversy: Remember Lance Bass in space? And remember when it didn't happen? 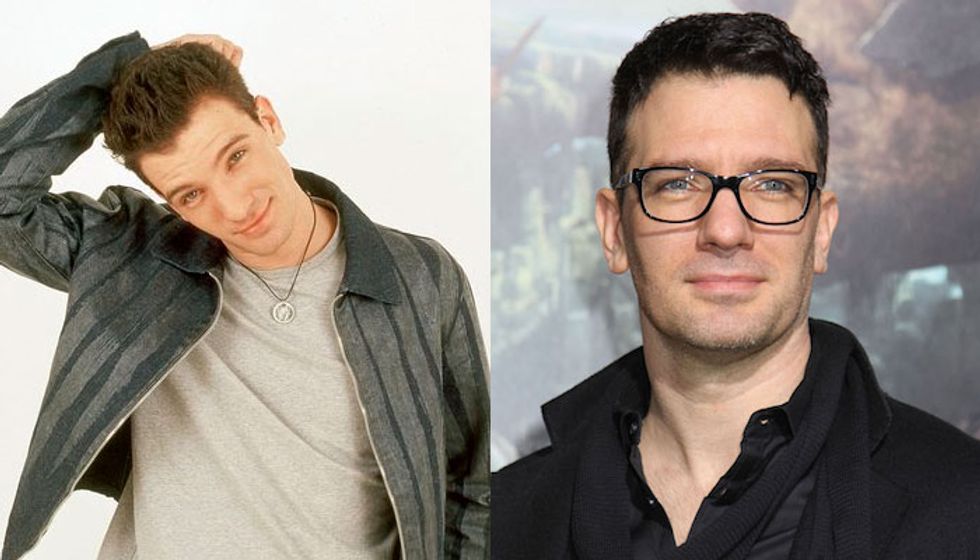 Relationship Status: He appears to be dating a glamour model of sorts named Kathryn Smith.

Post-*NSYNC Career Highlights: Chasez released his first -- and only -- solo album, Schizophrenic, in 2004, which had middling sales but awesomely emo cover art and a music video starring Tara Reid. He also was one of the judges for all seven seasons of America's Best Dance Crew, wrote songs for Backstreet Boys, The Cheetah Girls and Basement Jaxx and, most recently, launched Girl Radical, a "Supermassive American Girl Group" featuring eleven members that's in the vein of Japanese pop group AKB48 (which has 48-60 members at any given time). The group just came out with a music video for a cover of No Doubt's "Just a Girl." Perhaps he'll become the next Lou Pearlman?

Memorable controversy: Chasez has mostly avoided controversy although back in 2004, a scheduled halftime performance at the NFL Pro Bowl was cancelled following his fellow *NSYNCer's Super Bowl halftime debacle with Janet Jackson.

Style Evolution: From UCSD frat boy to Fabio Lite to that hot guy who works at the Apple store Genius Bar. 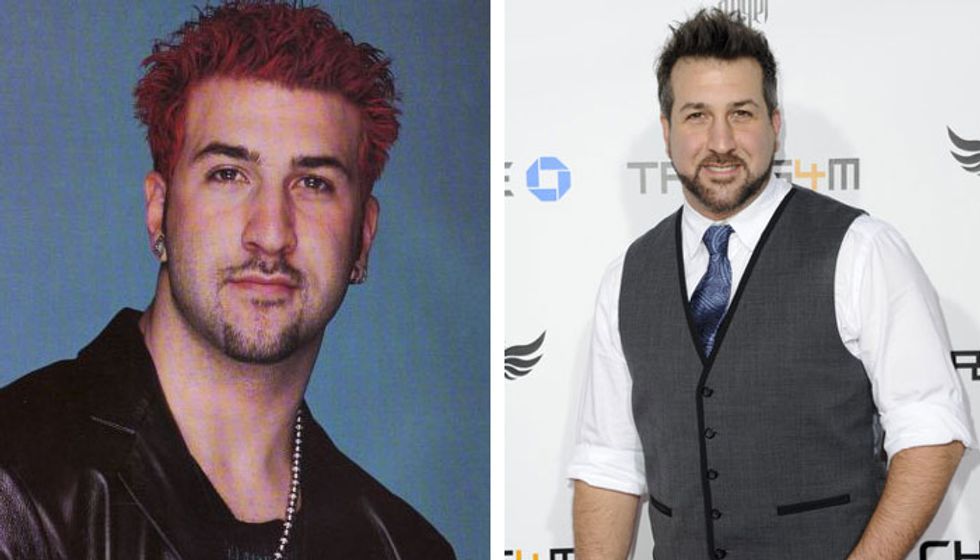 Post-*NSYNC Career Highlights: After letting us get our hopes up that he'd be making an ultimately ill-fated comedy album, Fatone (pronounced "Fat-one") moved on to the Great White Way where he starred as Seymour in Little Shop of Horrors and Mark Cohen in Rent. Other acting credits include appearing in My Big Fat Greek Wedding and something called Homie Spumoni. Last year he followed in Lance Bass' footsteps and competed on Dancing With the Stars (where he did the tango to a jazzy remix of the Star Wars theme) and he's currently hosting a cooking show on the Live Well Network called My Family Recipe Rocks.

Memorable Controversy: He was excluded from JT's wedding.

Style Evolution: From red-haired juicehead gorilla to that exurban dad you know with unfortunate tattoos. 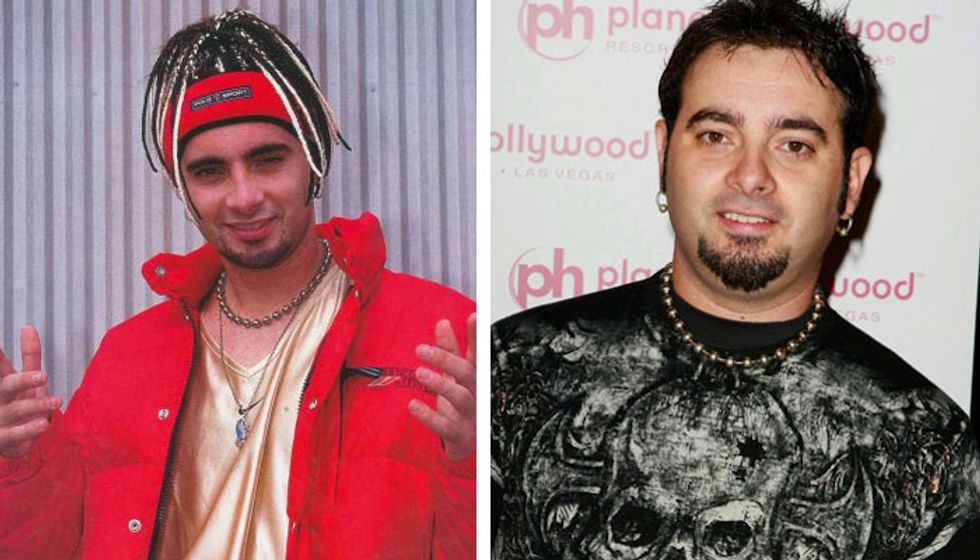 Post-*NSYNC Career Highlights: He had a wonderfully terrible fashion line called FuMan Skeeto that went bust in 2002 and was last heard making music with a band called Nigels11 (though, sadly, the last post on their website dates back to 2010). He also appeared on Vh1's Mission Man Band, which attempted to form a "super group" with Kirkpatrick, Jeff Timmons from 98 Degrees, Rich Cronin from LFO and Bryan Abrams from Color Me Badd. The whole thing just made us feel sad.

Style Evolution: From a pineapple head rave DJ to that sad dude who still goes to Warped tour.