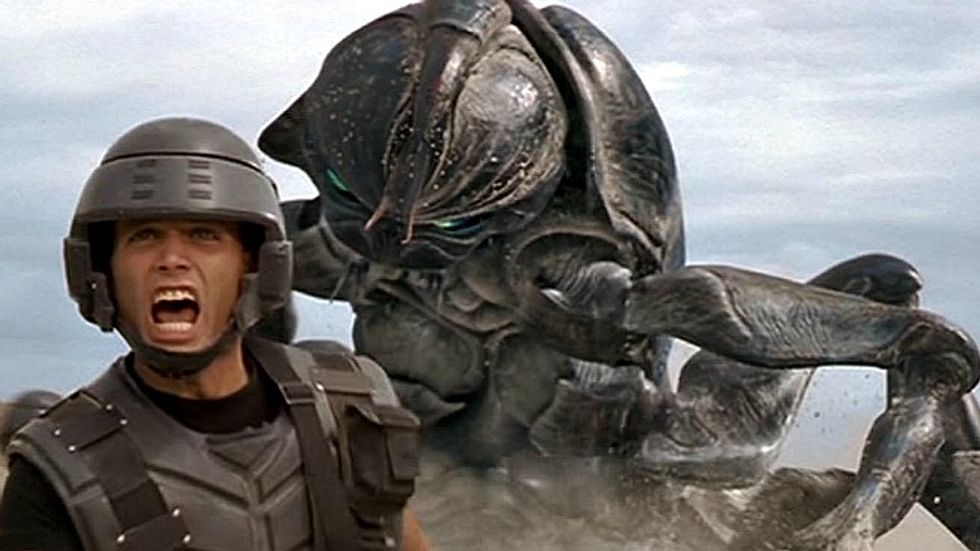 Your Guide to Staying in With Netflix's New Movies This Weekend

by Eric Thurm
PAPERMAG
Okay. The weekend is here. You should probably go out, see some friends, clean up around the house, or go on a date, right? But you don't want to do that, because you're tired from the work week and passive consumption of media is just sooo much easier. It's okay, you can make the decision to post up in bed or on the couch and order a ton of Seamless, you've earned it by working for the man all week. But if you want to approximate the weekend you might have had, here the movies new to Netflix this week that most closely resemble or substitute for the activities you could otherwise do. It's a good excuse. Really.

Calling an Exterminator -- Starship Troopers (1997)
Don't do any of the errands you said you were going to do. Don't try to squish the bedbugs or cockroaches infesting your apartment. Watch a ton of generic-looking '90s people (and Denise Richards) do it for you as they kill alien bugs for no real reason in Starship Troopers, one of the most misunderstood sustained pieces of irony-as-propaganda. (It's not really militaristic guys, read between the lines, gosh.) Paul Verhoeven, you crazy for this one.

Laughing With Friends -- Fletch (1985)
In this great '80s comedy, Chevy Chase functionally replaces all of your friends as he moves through a series of skit-like disguises and capers playing intrepid reporter Irwin M. Fletcher. Not only is Fletch a ton of fun (and your window into a skeevier past version of Los Angeles
beaches), it also has a ridiculous, synth-laden '80s soundtrack.

Seeing Another Movie -- The Hurt Locker (2008)
Kathryn Bigelow's Iraq War movie doesn't come up all that often in conversations about the past decade or so of film, which is weird considering that not only did it win Best Picture at that year's Academy Awards, it provided a breakout role for Jeremy Renner. There might be other movies out in theaters, but here's a big one you can catch up on from the privacy of your own home.

Beach Weekend -- Blue Crush (2002)
As if this needs any other explanation. Why would you go to the sandy, gross beach when you can watch Kate Bosworth and Michelle Rodriguez surf in Blue Crush?

Bad Dates -- Elizabethtown (2005)
Well, here it is, fam. The movie that led critic Nathan Rabin to coin the now-meaningless term "manic pixie dream girl." Rather than go through the motions of another tentative attempt at love, watch Orlando Bloom and Kirsten Dunst be insufferable doing the same! It'll make you feel better about yourself, we promise.