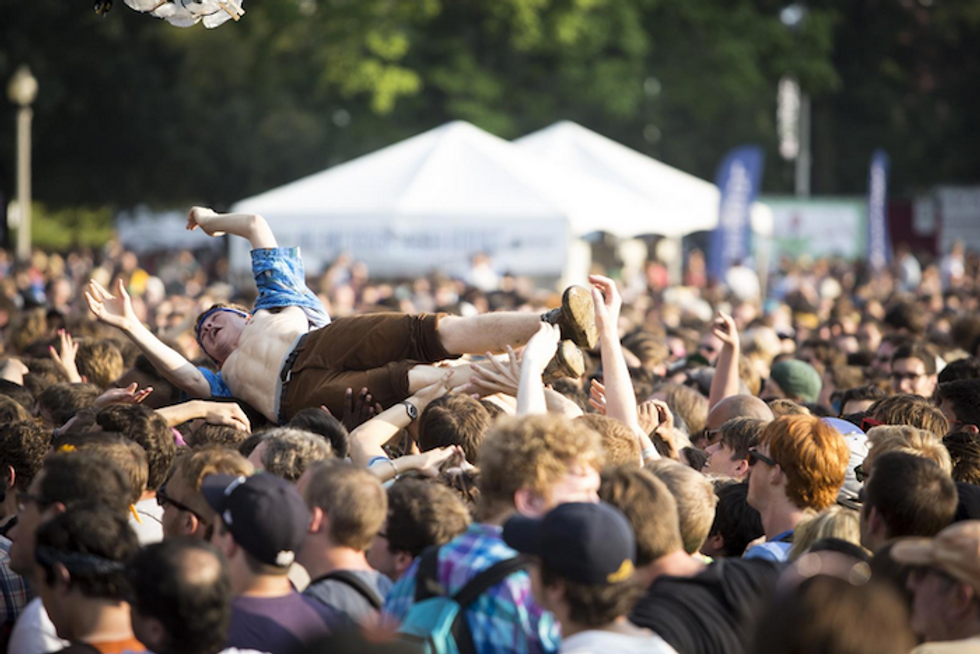 By Sandra Song
PAPERMAG
photo by Steve Scap
Sure, there are official afterparties this year, but instead of seeing the same people you saw in the day at, well, night, why not take the opportunity to delve into some smaller, local Chicago-bred talent in the wee hours? As such, we've assembled a list of some excellent shows for once Union Park shuts down, so that you're not stuck at the same watering hole as everyone else in a bucket hat.
Friday, July 17th
Fox Bar
Just a short walk away from the festivalgrounds, Soho House's Fox Bar will keep the party going with vinyl DJs all evening long. Even better, if you show your Pitchfork ticket to their mixologists, they'll pour you a complimentary beer and a shot.
Fox Bar, 113-125 North Green Street; 10pm. FREE
Ray Bans x Boiler Room 008
So you had to RSVP in advance for this one, but hey, maybe your security schmooze game is one to be reckoned with. After all, the mere fact that Makonnen, Speakerfoxx AND LIL B will all be in one room is almost too much to handle.
Location ???; 10pm. FREE with RSVP
Bump & GrindFORK
What's better than a self-described night of "sex jams, hip hop and R&B"? Nothing, duh. Especially when there's booze, manicures and NO COVER from 9-10 p.m. Acrylics and alcohol, oh my.
Beauty Bar, 1444 West Chicago Avenue; 9pm. Tickets $5
Saturday, July 18th
Chances Dances: The Pitchfork Review Release Party
The Pitchfork Review is one of the best long-form music publications out there and to celebrate their 7th issue (that has Grace Jones on the cover!), they're throwing a party with burlesque performer Po'Chop, artist Danny Giles, and DJ sets from the likes of Cqqchifruit, The Lady Speedstick and FKA Swag.
Subterranean, 2011 West North Avenue; 10pm. Tickets $5
How To Dress Well (DJ Set) + Peter Cottontale + DJ Taye + Harris Cole
We think the main draw here is DJ Taye, who makes some of the best new-gen footwork tunes to come out of Chicago's Teklife collective as of late. Plus, free!!
East Room, 2828 Medill Avenue; 9pm. FREE with RSVP
Father Cry$$$ Tour
Okay, not technically an afterparty, but rest assured that the most excellent Father will take care of all your raunchy, post-Pitchfork party needs. For the hedonist in you, make sure you grab a ticket and end your Saturday with a game of Who's Gonna Get Fucked First.
Reggie's, 2109 South State Street; 10pm. Tickets $17
Pitchfork Afterparty with Ma Nguzu
Hosted by estimable Chicago label-collectives Them Flavors and Auda, this Saturday night show will be headlined by Ma Nguzu, who's known for her work as a member of both Future Brown and Nguzuguzu. A staple of the LA-based Fade To Mind collective, turn up in your Hood By Air finest and prepare to death drop the night away.
RSVP for the Secret Location; 11pm. Tickets $10
Sunday, July 19th
Warp Records Afterparty
No one knows cutting-edge electronic music quite like Warp Records, and to showcase some of their best talent, they've arranged quite the Pitchfork afterparty featuring Daphni (aka Caribou), techno god Clark, Chicago bop heroes Sicko Mobb and UNO/Ghostly producer Feral. Trust us, this line-up is stacked.
Smart Bar, 3730 North Clark Street; 10pm. Tickets $10
Up Next Pitchfork Afterparty
Them Flavors is back for the second night in a row with In the Loop Productions for a show featuring Leather Corduroys, DIY hip-hop trio Hurt Everybody and more highly-regarded local acts. A part of the influential Chicago-based SaveMoney collective, members of whom include Chance the Rapper, Vic Mensa and Caleb James, it's sure to be a crazy one that's just a stones throw away from the festival grounds.
Bottom Longue, 1375 West Lake Street; 8pm. Tickets $15