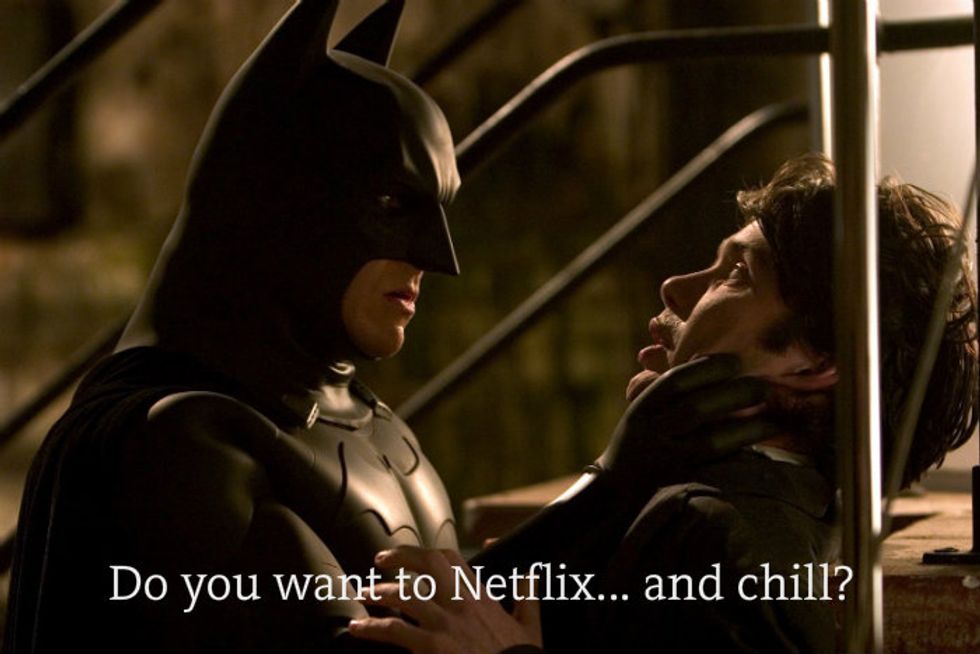 Your Guide to Avoiding the Hurricane with New Netflix Titles

by Eric Thurm
PAPERMAG
Fall is officially here, but in the fun, hay rides and colored leaves way -- it's just kind of gross and wet out (at least if you're in New York), and there's apparently a hurricane coming up the East Coast named after Joaquin Phoenix or something. So there's no real chance you're going to get anything done this weekend -- just start planning what you're going to watch on Netflix, starting with the new titles on the streaming service this month. Here are some activities you won't get to do because of the hurricane, and the Netflix titles that will serve as a rough approximation of them.
Saving the City -- Batman Begins (2005)
The Batman movie that helped jump-start the current superhero craze, Batman Begins is still the trimmest of the Nolan trilogy. It's fun to watch, has a genuinely well-told origin story, and also features a pretty excellent villain role for Liam Neeson. Why do we fall? So we can stay down on the couch.
Exercise -- Million Dollar Baby (2004)
Remember when this Hillary Swank-Clint Eastwood boxing movie was a huge deal and won a ton of Oscars (including Best Picture)? We sort of do! Take the opportunity to watch someone else get sweaty and revisit the film, to see if it was really deserving of all the hype (while Hurricane Joaquin dramatically thunders outside your window).
Netflix and... Wait, Hold On -- Boogie Nights (1997)
If you don't have a, uh, "buddy" for the hurricane, consider Paul Thomas Anderson's great film about the porn industry. There's Mark Wahlberg with a giant prosthetic penis, a great late-game performance by Burt Reynolds, and enough obsession with sex to hopefully tide you over for a weekend... by yourself.
Cooking Yourself Dinner -- Barefoot Contessa
The Barefoot Contessa Back to Basics collection hits the streaming service, giving you an opportunity to watch and learn about the glamour of cooking from the one and only Ina Garten without having to do any of the hard work -- while you take the simplest path and order Seamless. Also, take this weekend opportunity to read Eater's excellent profile of Ina.)
Drama with Friends -- The Vampire Diaries
Season six of The Vampire Diaries is on Netflix now, ready to catch you up to speed on all of the insanity on one of The CW's most successful shows. Don't go somewhere where you'd have to just fight with your friends, especially when you can watch other people do it while looking much better and being more interesting. Also, this is the first taste of the month of CW dominance on Netflix, including the first season of Jane the Virgin and The Flash, both of which are good options for fall TV catchup.
You May Also Like
Famous People