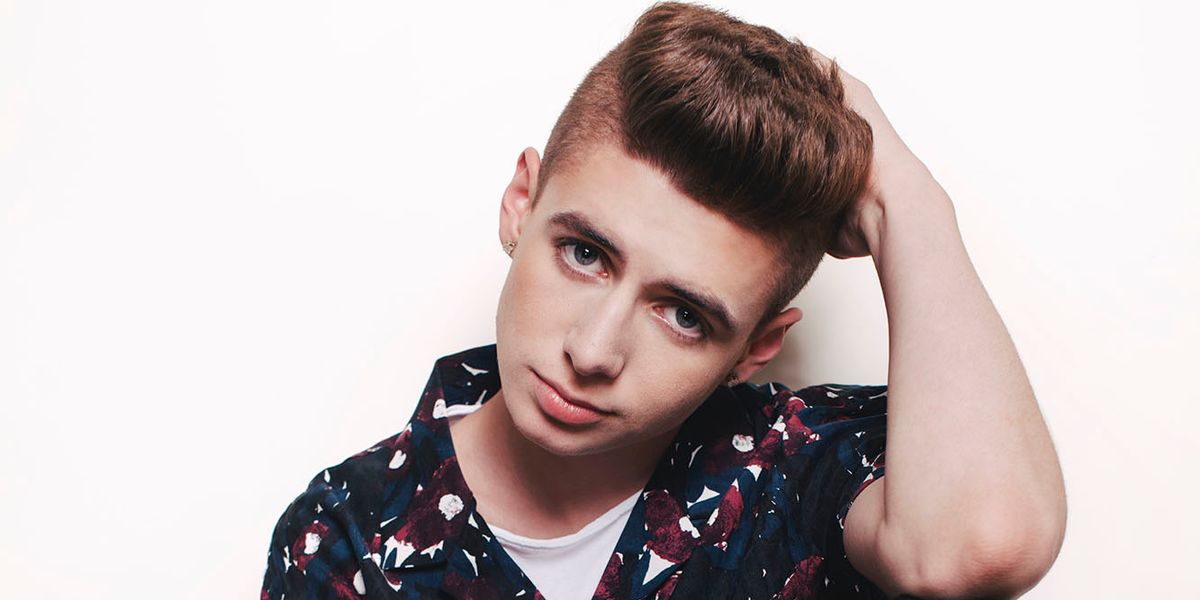 Most social media platforms give users the time and opportunity to edit before posting their social missives live. YouNow, a popular live-streaming network, pulls the editing safety net—those who find fame there do so in the rawest sense. There's a camera, there's you, and there are some strangers watching. It's a lot of pressure, but that doesn't seem to bother 17-year-old Zach Clayton who's become one of the service's most recognizable stars under his handle BruhItsZach. He won YouNower of the Year at this year's Shorty Awards—if anyone knows how to live stream, it's him. Unlike Vine, YouTube, or even Instagram, YouNow fame requires getting in front of the camera multiple times a day—it can be much more intensive than some of the other paths out there. But sticking with it can reap benefits, like Clayton's 1.5 million dedicated followers and 33 million views. We talked to Clayton about his tips for becoming a livestream giant, pursing a music career, and balancing his social media life.

Before we get into all your exciting musical endeavors, let's establish some background. When did you start using social media? What platform did you join first? What drew you to it?

Before I got into social media I wasn't on the internet as much as every other kid—I wasn't on Twitter or anything. I didn't really have a phone. I was offline, always hanging out with friends. One day I made an Instagram and I saw a friend posted a picture from YouNow, the live broadcasting website. I've always been into comedy. I always wanted to be class clown. When I saw [YouNow] I thought, "Live broadcasting seems like a fun thing to do, I can broadcast to my friends and stuff." I did that, not with the intention to blow up on the internet but to have fun.

I got lucky: one night I was doing prank calls and my broadcast was featured [on YouNow] and my broadcast had hundreds of viewers. I held all those for an hour—600 people watching me who had never met me. That kick-started everything. I'd go live the next day and I had 500 viewers again. I kept growing after that and moved to other platforms, too. "Follow my Instagram!" That's how I build everywhere. I was 15 [when I first joined.]

That's what I like about it. It's really genuine. You really get to be yourself. Some people go online, make a video and script it all out and it can be totally fake. I never really liked that. I like being naturally funny. Being able to have that power, to go live and say something and a few seconds later all those people can hear it and comment right back to you, that is so dope to me.

Exactly. I'm just being myself. It really works out.

What makes for a good livestream?

I always go by what the viewers want. Sometimes you might not want to do something but it's always, at the end of the day, what the broadcast wants to see, because they're the ones coming in to watch you for an hour a day. Every time I go live or when I am live I say, "Yo, what do you guys want to see me do?" I've done so many things on broadcast that now they have a list of stuff they know I'll do and they'll say "do prank calls! Do dares!" That's how I go about it.

When did you realize that people were really connecting with your streams? Were there a few instances that blew up for you?

It was gradual, but it didn't get very far until that featured broadcast. It took me a month or two to get more than 10 viewers. But once I got those 10 viewers, those people came and watched me everyday. Once you have a certain amount viewers you get placed in the charts—it's organized by viewers. Sometimes I would stay on really late at night because less people are online at that time and it would give me a better chance of going up the chart, being second or featured. It started off slow, 10 to 50 viewers. When 50 was my average, that's when the one broadcast took off. It was 2 A.M., I was on for two hours and I was featured because everyone else had logged off. Once someone gets off, all their viewers go to the person behind them in the chart. I got the flood of those viewers.

You really figured out the science behind this.

I found out the tricks. It can be very tiring.

No kidding! How frequently do you go live? Is it daily?

Lately it's been a little bit less because I've been traveling for business and because I have so many other social media platforms to keep up with now. Back in the day it was just YouNow. I had everything else but it was my new thing. When I was first getting big, it was an everyday thing, 2-3 times a day. I would start at noon or 1, broadcast for an hour. Then I'd go live at 5 o'clock for another hour and then at 9 or 10, I'd go live again for 2-3 hours. That's back when all I ever wanted to do was YouNow broadcasts. Now I try to go live at least 3 to 4 times a week. I've been working on it.

When did you realize that your YouNow popularity could translate into a viable career?

When I started to get offers from apps and tours. I started to think about it more—now that I have this following, I should probably do something with it. I moved into YouTube.

You're part of a collaborative YouTube account called Our Journey with some other influencers, too, including Baby Ariel who has been featured here before. How did that come to be?

Our Journey happened because we were all just friends. There's only seven in the group but we have a group chat of maybe 10-15 different social media influencers and one day someone said, "We should make a collab channel" We were just like, "yeah, okay, that would be cool." We are all just so close—we had ooVoos [video calling] every night, or FaceTime calls; we would text all day. We got everyone in the group chat who was 100% down for it, who were going to commit to it and post and we just did it. I love collaborating. It's my favorite thing, to be honest.

That's a good segue—what is music if not collaborative. When did you start pursuing it?

Everybody is always like, "Oh, I can sing, I sound like Justin Bieber" or whatever but I've always had that mindset. I've always known I like music a lot more than a normal person. I've always had a deep passion for it but my eyes were never open to it until I got on social media. I used to be in this group called 5quad that broadcasted on YouNow—it was the same thing as Our Journey, basically. Our manager at the time decided to put us in the studio to try and make a song with us. We did, we made two songs and just being in the booth and being at the studio and making music, that really opened my eyes. I realized I really liked doing it and I wanted to continue doing it. I wanted to make my own music. June or July of last year I dropped my first song. Seeing how well it did—it got one million views in a month—I was like, "Okay, this is something I want to keep doing."

That was "Nothin' but love." One thing that's interesting about your musical path is that all your music is original—you didn't start with covers like a lot of social media celebs. Is there a reason for that?

I just never really thought to do covers. It's cool to find your own sound. All of the lyrics in my songs are, for the most part, about me. When I'm singing it, I can perform it better and it sounds better. When it's more genuine and you understand it, it comes out easier for you. That's my mindset.

Earlier this year you released your debut EP, Kick It with Me. What was that process like?

I'd written before [the EP] but that was the first time I got to sit down and be there throughout the whole creative process. The EP was different because I had to make five songs quickly—I did four songs in a week or two. But it was fun. I enjoyed every second of it. Sometimes we'd write lyrics or certain melodies and when I'm in the booth, I'll sing it differently. I'm not even trying to and someone will say, "That's not how we wrote it, but I like how it sounds. It sounds better." And it came from me and that's something that happened a lot. I like to hear it because it's something that's coming from my own mind. It was a fun process.

What's in store for the future? A tour? Are you working on new music?

A few months ago I did my own tour, the Nothin' But Love tour. It was just four or five shows, a quick run to see how things would go. We're working on finalizing the next leg of the tour, which will be 12 dates. Hopefull,y I'll be on the road in a month or two. We're considering a Christmas cover, too, since I haven't done covers.

What do you like to do when you have some free time?

Downtime? [Laughs.] I hang out with friends. There's never a time I'm not with friends or my girlfriend. I'm also always in L.A. and that's where I work, so I'm usually working, honestly.

Anything you've been binge watching lately?

I like to watch Shameless from time to time. I won't want to watch it, but I'll see it on and then I'll get stuck. It's never just one episode. I'll end up watching like five.

What are you listening to?

I listen to everything. Growing up, my mom would always listen to country in the car and I don't know why but I loved it so much. I'm everywhere with music.