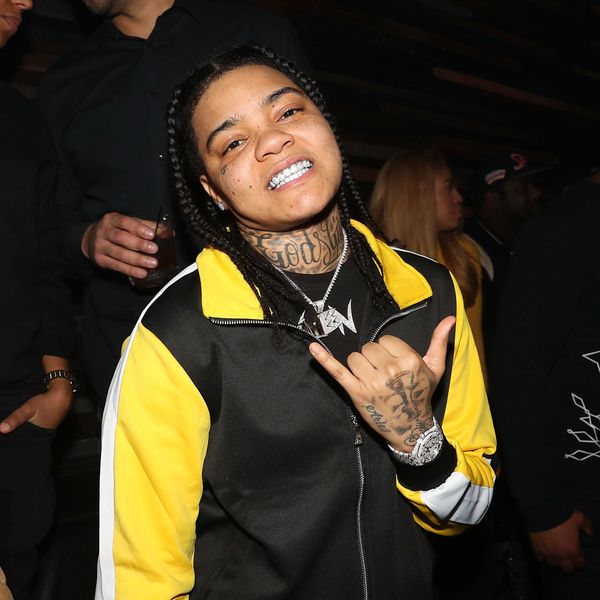 Following ample backlash aimed at Kodak Black for his use of a homophobic slur while name-checking Young M.A. in a new track, Young M.A. herself has decided to weigh in on the "weird" rapper's choice of lyrics.

Last month, rapper Kodak Black released a single dubbed "Pimpin Ain't Easy," in which he says, "I be pullin' out straps on these fuck n*ggas/ I go Young M.A. on these dumb bitches/ Like a dyke, man, you n*ggas can't fuck with me." Not only that, but he also raps at one point that, "I'm fuckin' Young M.A., long as she got a coochie."

However, Kodak Black was soon criticized for his perceived "persistence" of Young M.A. — who is openly gay — as well as his use of the homophobic slur "dyke" in the track. According to Complex, the lyric is likely a reference to a "running joke" sparked by Kodak Black leaving a comment underneath a photo of Young M.A. and Nicki Minaj back in February that read: "Both Of Y'all a Get It."

Given the internet buzz, Young M.A. decided to address the controversy on Sunday night via Instagram Live. Before saying she would address the issue in person (as they both have upcoming shows in the same city), Young M.A. said, "Y'all keep talking about this Kodak situation. Y'all n*ggas is weird, bro." She then went on to say, "What's wrong with y'all? Is y'all n*ggas alright? Come on, bro. Like obviously the n*gga's weird."

Unfortunately though, Young M.A. soon had to follow up with a clarification. In another Instagram Live, the rapper critiques his fans who continue to bother her about the reference, saying they "take shit and make it something that it ain't."

She continues, "I'm literally talking about the people in the comments. At the end of the day, that's not my preference... that's why I said y'all weird."

That said, Kodak Black's defense of his lyrics was also less than stellar. In his own Instagram Live, Kodak Black reassures viewers that there is no actual ill will between the two rappers. However, he also says, "I'm talking 'bout, how you a girl but don't want your pussy penetrated?"

Obviously, his comments have other internet users accusing the rapper of "harassing" Young M.A.

Kodak Black publicly harassing Young MA for sex as if he wasn’t charged with felony first degreee criminal sexual conduct and doesn’t have an upcoming rape trial he should be worried about https://t.co/RPTkxUFeiK

If a gay man was harassing Kodak the same way he’s sexually harassing Young MA, an openly gay woman, we wouldn’t hear the last of it from straight men.

Not only that, but this latest controversy has also led others to remind the rest of the internet that Kodak Black is also currently awaiting trial for allegedly sexually assaulting a woman in 2016.

it’s very very very very strange that kodak black, a man facing a r*pe charge, is harassing young ma for sex and the internet finds it funny. this place just gets weirder.