You Just Got Punk'd.

You know that guy that's already accomplished so much that even though you admire him, he kind of makes you miserable with jealousy? Kind of like the opposite of Schadenfreude? Itâs one thing when heâs amassed a catalogue of some of the most adventurous music you've ever heard before turning 25, writing compositions reminiscent of Frank Zappa flowered with a vocal croon falling somewhere between Billie Holiday, Usher and Bob Dylan. But his visual art, adorning the covers of each of his records, has even won him some accolades (with rumors that it might be featured in the upcoming Whitney Biennial). David Longstreth, aka the sole permanent member of the Dirty Projectors, is one such guy.

With a discography that dates back to his year-long acceptance deferral from Yale in 2000, Longstreth has long been creating some fundamentally weird pop music. From the freak-folk of The Graceful-Fallen Mango (the pre-college record) to the beautifully strange The Glad Fact, Longstreth is no stranger to experimentation. The Getty Address, released in 2005, was birthed from an idea he once had for an opera about Don Henley, Sacagawea and ancient Mexico. And, as you mightâve guessed, it is as freaky as it sounds. Described by Longstreth as a "glitch-opera," the record is more than just an adventurous foray into experiment. The Getty Address, Longstreth recalls, "Came out of a composition I began working on as an undergraduate. It was kind of an amalgamation of all my influences up to that point in time." As Longstreth matured, he began to take on projects of a different sort: less composition, more imagination.

While helping his parents move out of his childhood home in Queens, Longstreth came across an empty cassette case that once contained Black Flag's 1981 debut record Damaged. The album, an integral one in both the hardcore punk and DIY scenes, was one that hit particularly close to home for Longstreth. "I remember my brother playing it all the time," he recalls. "So I started listening to it. It was one of the first records that I really loved." It was out of this adolescent adoration that Longstreth decided to undertake his newest recording venture, Rise Above, a reimagining of Damaged.

Walking with Longstreth through the Metropolitan Museum of Art on a recent afternoon, it became clear that the idea of copying -- or the more appropriate term reimagining -- works of art has always been a fascination of his. From the countless art students we passed spending hours repainting a Matisse or Rembrandt to Dirty Projectors' name, Longstreth has admitted a fascination with "the idea of projecting an image that already exists and presenting it in a different context."

Though Rise Above is certainly a departure from the ferocity of Black Flag, Longstreth and his band for the record, composed of Brian McComber on drums, Nat Baldwin, and Susanna Waiche and Amber Coffman providing additional vocals, come out with uncharacteristic feedback and walls of beautifully dissonant harmonies that gives the record an aggression that rivals its inspiration.

On "Police Story," the closet Dirty Projectors gets to a mellow tune, Longstreth stretches his vocal chords -- âThe singers I most admire are probably those I least sound like, like Bob Dylan. Though if I keep singing the way I do I'm probably going to end up sounding like him," Longstreth jokes -- to its physical extremes while screaming lyrics like, "I walk down the street. / I flip them off. / They hit me across the head with a Billy club. /Nothing I do, nothing I say, / I tell them to go get fucked they put me away." The song proceeds to breathe with a beautifully peaceful passage anointed with rich "oohs" and ethereal strings, a signature move for Longstreth. In "Depression," notable for being the first track he reimagined for the Rise Above project, Longstreth similarly juxtaposes guitar-driven aggression and angsty lyrics ("They say things are gonna get better, but all I know is they fucking better.") with Waiche and Coffman's soaring harmonies.

What separates Rise Above from any of Dirty Projectors' previous albums is a reliance on the live-band aesthetic. Even in the pre-Rise Above DP tunes that don't showcase heavy sampling and whirly electronics, the song usually relies on a pretty solidly acoustic base. Never before has it been so solidly a guitar, bass, and drums band. This becomes all the more surprising when one considers the personnel Longstreth enlisted to help produce the record. Grizzly Bear's Christopher Taylor and Christopher Bear co-produced and recorded auxiliary percussion, respectively. Listening to the album, you can hear tidbits reminiscent of Yellow House's atmospherics, especially in the opening segment to "Police Story" and Rise Above's final track, an untitled instrumental.

"Working on the record with Chris [Taylor]," Longstreth recalls, "I was afraid it was going to be too much. We were for three straight days mixing the record and I'm very happy with the final product."

We'll also find out soon enough if Black Flag's musical mastermind Greg Ginn is a fan of the record. When asked about the process of attaining permission to record Rise Above, Longstreth, well, just didn't bother. "I didn't really ask permission, though I did send a copy of the record with a letter telling him what we did." Now it's Ginn's turn to (re)interpret it whichever way he sees fit.

Dirty Projectors are currently on a European Tour. Visit westernvinyl.com for more info. 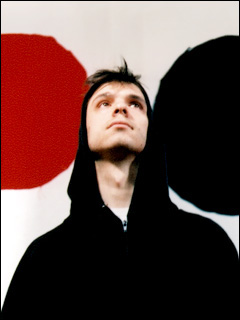