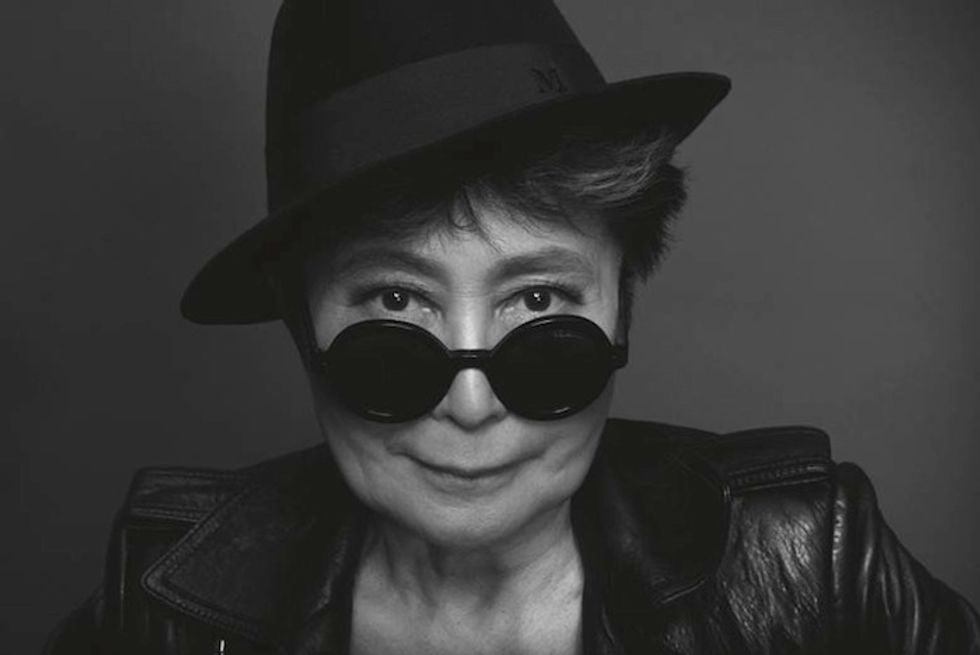 by Abby Schreiber
PAPERMAG
(Photo by Matthu Placek, courtesy of Yoko Ono)
Sin City just got a little more peaceful, thanks to a new art installation by Yoko Ono. The artist and longtime peace activist brought her Imagine Peace project to The Cosmopolitan of Las Vegas hotel, which will see the words 'Imagine Peace' spelled out in 24 different languages passing over a three-minute long video cloudscape projected on lobby columns, registration desks and LED displays outside the building. We had the chance to talk to Ono about her piece and were pleasantly surprised that despite all the grief happening in the world right now, she still thinks the future looks bright. Read on to hear her thoughts on Millennials, the Internet and the biggest thing we need to be doing to achieve peace.

What do you think is the biggest change the world needs to make collectively to come closer to achieving peace?

To make peace a reality, you have to first imagine it. You have to visualize it. I think that if 99 percent of the world imagine world peace, I think we're going to be able to do it...There are some people who say, "We're facing doomsday" or "This is not going to happen." But we don't have to do that. We just have to understand that it's going to be great if all of us together wish for it. You see already what's happening -- around the '50s and '60s, people really admired people who went to war and killed people. "Oh I killed 20 people." "Oh my god, that's great!" or something. Now people don't feel that way. People feel it's much nicer if all of us will be peaceful. I think our common knowledge has changed a lot.

Our values have changed.

Right. The values are changing a lot and it's changing in a very good way, I think.

But you think it's still possible for us to achieve greater peace despite what's happening in our country with Ferguson and the Eric Garner cases and then globally like in the Middle East for instance?

Yes. As long as we know that we can make [peace]. We have to be pragmatic. And that's what we're doing.

Are you political? Do you follow what's happening in government?

And the Internet makes it easier for people to spread their ideas.

I know. This is a great age. Most people didn't know anything about the world outside of themselves but now you can find out the history of all different countries in the world if you want to.

Do you think that in the age of the Internet, our well-being and the general level of peace has increased?

Yes, definitely. Definitely. I think people these days -- people say things like "young ones are not really together." But no, they're very, very together! The youth of today are very, very intelligent. When you look at the youth of, say, the 1950s, there's such a big difference.

Well I think what we were taught at the time [in the '50s] didn't mean anything really. We thought, "Well, we have to follow that because that's what our parents are saying" or whatever. These days we know that it's very important that we keep [questioning].

Do you think youth today are just as active and engaged as they were say, in the '60s?

Well I think that step by step, we're increasing our wisdom and now when you look at young people, they talk about meditation and people understand [what they're talking about]. In the '50s or '60s, many people would have said, "What is that? Why is it so important?" Now we have a greater understanding amongst each other and it's really great that we don't have to explain it all -- we don't have people laugh at us when we say things like that.

Let's return back to the topic about what we need to do to achieve peace. When you spoke of imagining peace, are there any thoughts or visualizations we should be doing in particular?

Well, think about all people smiling. How could people smile in a violent world? Just recently I read a Japanese [study] that found out that when people are smiling, the whole condition of their body is different...It's as simple as that.
You May Also Like
Film/TV