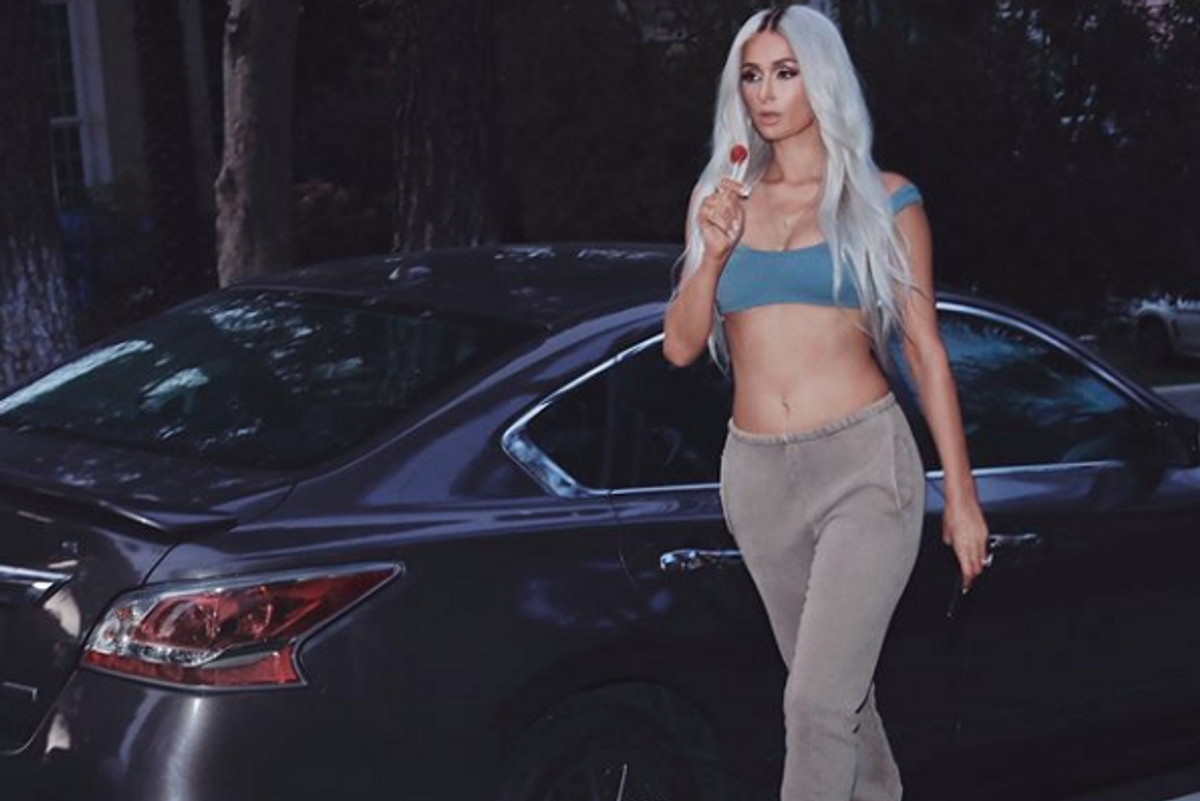 Earlier this week, our feeds were inundated with a flood of Kim Kardashian klones, all decked out in Yeezy Season 6 and sporting platinum blonde wigs to match Kim K's iconic locks. The paparazzi-style photos were identical to ones Kim had rolled out on her feed in December, which led to widespread (and correct) speculation that she was debuting husband Kanye West's latest clothing line. On Tuesday, with Paris Hilton, Amina Blue, Jordyn Woods, Kristen Noel Crawly and the Clermont twins in on the action, it was clear to media and fashion insiders exactly what West was doing. But was it clear enough to the rest of the world that the photos were, in fact, a calculated ad campaign?

The Kardashians, preceded most notably by Paris Hilton, have been playing with our perceptions of reality since Keeping Up with the Kardashians first aired in 2007. It's why we love them, and why we hate them: they're always in control of the narrative. Blurring the line between sponsorship and actual endorsement has become such a common trope on Instagram — an inseparable aspect of both its purpose and functionality — that putting #ad at the end of a caption has become a rare universal joke in a culture splintered into niches. Playing with reality is woven into the very fabric of the gram, and no one knows this better than Kim Kardashian (except maybe for her younger sister and perfect protégé, Kylie Jenner).

This latest Yeezy campaign has earned the accolade Kanye often ascribes to himself, cheekily or not — genius. We are all Kim. It's Yeezy's world, and we're just living in it. Models wearing sweats and oversized Carhartt jackets in empty suburban McDonald's parking lots are at once totally familiar and accessible and, given the luxe reality of Kimye's life in Calabasas, totally unattainable and highly aspirational. (So aspirational, in fact, that other influencers quickly created their own tribute posts, further diluting the connection between advertisement and reality as the original concept slipped away from its source). These are the kind of images that make fashion shows feel irrelevant and traditional marketing gaudy and stale. They're also the kind of images that the Federal Trade Commission (FTC) has tried, with questionable success, to regulate since the dawn of social media.

In early 2017, the FTC sent out more than 90 letters reminding celebrities, athletes and other social media influencers and marketers that they need to clearly and explicitly disclose their relationships with brands when promoting or endorsing their products. They also noted specifically that putting a short phrase like '#ad' at the end of a long post isn't sufficient, as most people scrolling Instagram on their phones won't tap to see beyond the first three lines to see the rest of the caption. In other words, the FTC know your tricks, and they're not having it. But how effective are these guidelines really? Most of us know by now that not every woman you seeing hawking Fashion Nova sets really "lives in them," nor does every influencer sipping on Flat Tummy Tea actually drink the stuff, but how long did it take you to figure that out? And how many of us were at least a little bit curious about those products in the interim?

Yeezy is not the same as fit tea, and the need for fashion to subvert norms in order to stay relevant and thriving as an industry means campaigns like this are seen as innovative and mold-breaking rather than duplicitous or misleading. But it may not be totally safe from the confines of the law. In 2015, the FTC reached a settlement with Lord & Taylor after the retailer paid "50 select fashion influencers" $1,000 to $4,000 to post a photo of themselves wearing a certain paisley dress, Fashion Law reports. The photos were credited to Lord & Taylor's Design Lab, but weren't marked as ads, and the FTC's formal complaint against the brand was a strong stance against native advertising that looks too real to be detected by consumers.

Will Yeezy face the same fate? It's completely possible that the models in question were not paid for the posts, even in clothing, but being connected to a Yeezy campaign is a boost in and of itself. Should recognition count as a commodity in a world where every click can be monetized? Lifestyles have become brands to the point that the individual promoting it is a brand in and of themselves. The history of product placement is well-documented through the advent of modern media. We look to influences to do just that — influence us, and indicate where we should shop, what we should wear, how we should eat, what we should aspire to. It would be nice to think that the things celebrities and brands promote are endorsements they actually stand by in their personal lives. But as social media turns even the bedroom into an increasingly corporatized space, where do brands end and we begin?