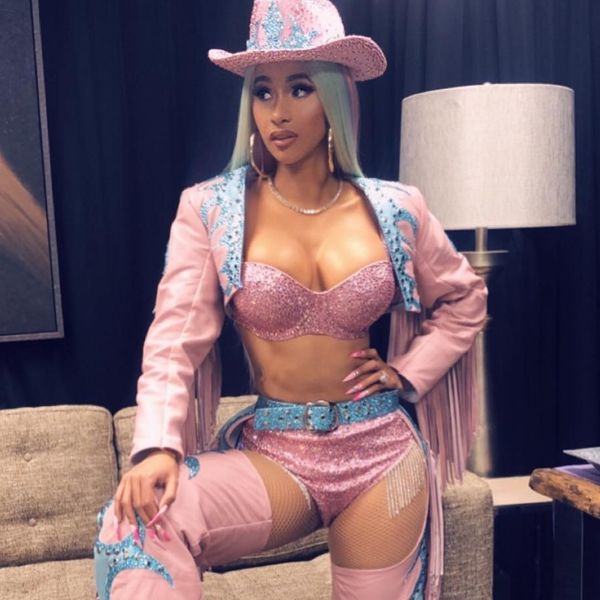 How Yeehaw Took Over the Internet

Everywhere you look, it seems like cowboy hats and boots are back with a vengeance. From Solange to Kacey Musgraves to Balenciaga's cowboy boots, the American West is being drastically reimagined for the Internet age via an online movement that can only really be described by its rallying cry: Yeehaw.

But where exactly did our fascination with Yeehaw come from? Was it the success of Red Dead Redemption 2? Was it the mainstream success of progressive country artists like Maren Morris and Musgraves? Was it the memeability of the littlest yodeler, Mason Ramsey? Was it early aughts nostalgia for the looks sported by Mary J. Blige and Lil' Kim? Are we secretly living in some yee yee-happy, Westworld-esque simulation experiment?

The answer, while entirely speculative, is likely a combination of all of the above — though it all seems to be fueled by a desire to subvert the most conservative, traditional American tropes. After all, according to NYLON Social Director (and lifelong Yeehaw adherent) Annalise Domenighini, Trump's presidency has likely played a role in the rise of Yeehaw.

"Culturally, Yeehaw's always been kind of looked down upon, but the cultural privilege of the Trump voter has made people a little more aware of what those people are doing," she speculates. "It made more people aware of that lifestyle, [whether it be] people hearing in music or seeing it reflected in coverage they've been seeing. It brought it all back into memory."

It could also be argued that the modern flipping of the hypermasculine, All-American cowboy trope likely has something to do with the Internet's seemingly sudden fascination with Yeehaw. Take the critical and commercial success of everyone from Mitski and her subversively titled Be The Cowboy release to forward-thinking country artists like the aforementioned Musgraves and Morris, whose genre-spanning work has quickly wormed its way to the top of the charts. The result? A wide-spectrum of listeners who have embraced the trend with vigor, not to mention earnest admiration tinged with a hint of self-aware irony.

As for where this embrace of Americana came from though, well, it's kind of always been there. Unsurprisingly, Black artists have long had a prominent hand in furthering Yeehaw as the cultural force it is today, and we'd be remiss to forget the long-standing connection between their contributions and the resurgence of these trends. As noted by writer-critic Antwaun Sargent (who launched a viral thread on the Black Yeehaw aesthetic), 25 percent of the cowboys working on the Western Frontier in the late 1800s were Black — something that's been whitewashed in the collective American cultural memory thanks to Hollywood and history textbooks.

"I think what people are responding to is the fact that the Black cowboy and cowgirl have been erased from the pop imagination," Sargent says. "This has kind of been in the culture for a long time, but now people are celebrating it. It had been something had been purposefully erased from African-American culture."

"I think what people are responding too are the fact that the Black cowboy and cowgirl have been erased from the pop imagination."

Not only that, but as Sargent notes, the ideals the American cowboy represents — freedom, self-presentation, self-fashioning — are also concepts that many Black creatives are responding to. After all, as noted by journalist Carla Aurelie in her essay "The Black Yeehaw Agenda Is Chic And Thriving," cowboy aesthetics and Western dress have long been an integral part of R&B and hip-hop since the early 2000s. Just think back to icons like Mary J. Blige, Lil' Kim, and Beyoncé, who proudly donned chaps and cowboy hats long before the articulation of Yeehaw culture. And it's an aesthetic statement that's slowly been trickling back into high fashion as of late with Sargent name-checking Black designers like Pyer Moss and Telfar Clemens, who were "really thinking about America and Blackness' relationship to it," as well as artists like Kelela who have brought the bedazzled cowboy hat trend back.

And it's an aesthetic legacy that continues into today. Just look at that viral clip of Cardi B dressed to the nines at the Houston Rodeo or Solange's When I Come Home, an album whose promotional aesthetic is an overt homage to her Texan rodeo roots. As Sargent — who recently hosted a livestream conversation with Solange about the album — says, Solange's embrace of this is "kind of a full-circle moment."

"We're talking about the spirit of her hometown, which is Houston, and how that aesthetic plays into identity formation for Black people in the South, particularly," he notes, though Sargent also is careful to also mention the legacy of Black cowboy communities located on the urban East Coast, as captured by photographers like Ron Tarver and Brad Trent.

And as Domenighini notes, contrary to popular imagery, Black people have always been a huge part of Yeehaw culture, which at its core has also always been rooted in class struggle. To that end, there's also a question of appropriation to address.

"I think this will definitely spur a lot of conversations about appropriating poor culture as an idealized, romanticized way of living," she hypothesizes. "It's always been this push-and-pull... Definitely, the upper classes will always pick parts of culture they also push down classwise." However, she also hopes that the conversation surrounding the resurgence of Yeehaw will spur a discussion about "how the West, at least from white perspective, has always been so focused on colonizing and taking from poor people."