When we talk about the LGBTQIA+ community, there still isn't a lot of talk about the "A" portion, and that's something UK-based model and activist Yasmin Benoit is actively trying to change.

As an asexual and aromantic person, Benoit does not experience sexual or romantic attraction. And while she's spent the majority of her life comfortable with this knowledge, it's also something she knows isn't the case for many others — and a lot of this can be chalked up to a dearth of asexual and aromantic representation.

So, using the platform and visibility she built as a model, Benoit has spent the past two years making videos, writing posts, and giving talks about the topic, which is still rife with misinformation and harmful stereotypes. According to her, "when you say you don't experience romance and sexuality and that those things are, innately, not a part of you, people think you're less human," which she says is a result of the importance society places sexuality.

"[They say] you're robotic. You're psychopathic. I often get narcissistic," as Benoit explains, before launching into the misconceptions she has to deal with on a daily basis. The biggest one? Her occupation, especially when it comes to her work with lingerie, almost always elicits a confused public reaction. Even though the rationale behind modeling lingerie is simple: she likes the garments and enjoys mixing up her portfolio.

"People find it weird as an overlap, because I'm asexual," she explains. "People think if you're modeling lingerie, something sexual is going on. They don't realize I'm just standing there for a couple hours, making a little conversation and shaking hands, before I go home."

Yet despite Benoit's sound logic, she says she still, on the daily, runs into a lot of questions surrounding her job, which is "seen as an oxymoron" — likely due to the inherent sexualization of lingerie modeling. That said, she says this isn't the most troubling assumption she's had to deal with, as exemplified by the myriad of invasive questions pertaining to why she's asexual and aromantic.

"Literally, yesterday, I had a man insisting I had been molested, and I was just hiding it and repressing it," she uses as an example. "He was insistent that that was obviously my issue. They think sexual attraction is the most human thing ever, and it's impossible to not feel that. You can't be human if you don't feel anything." 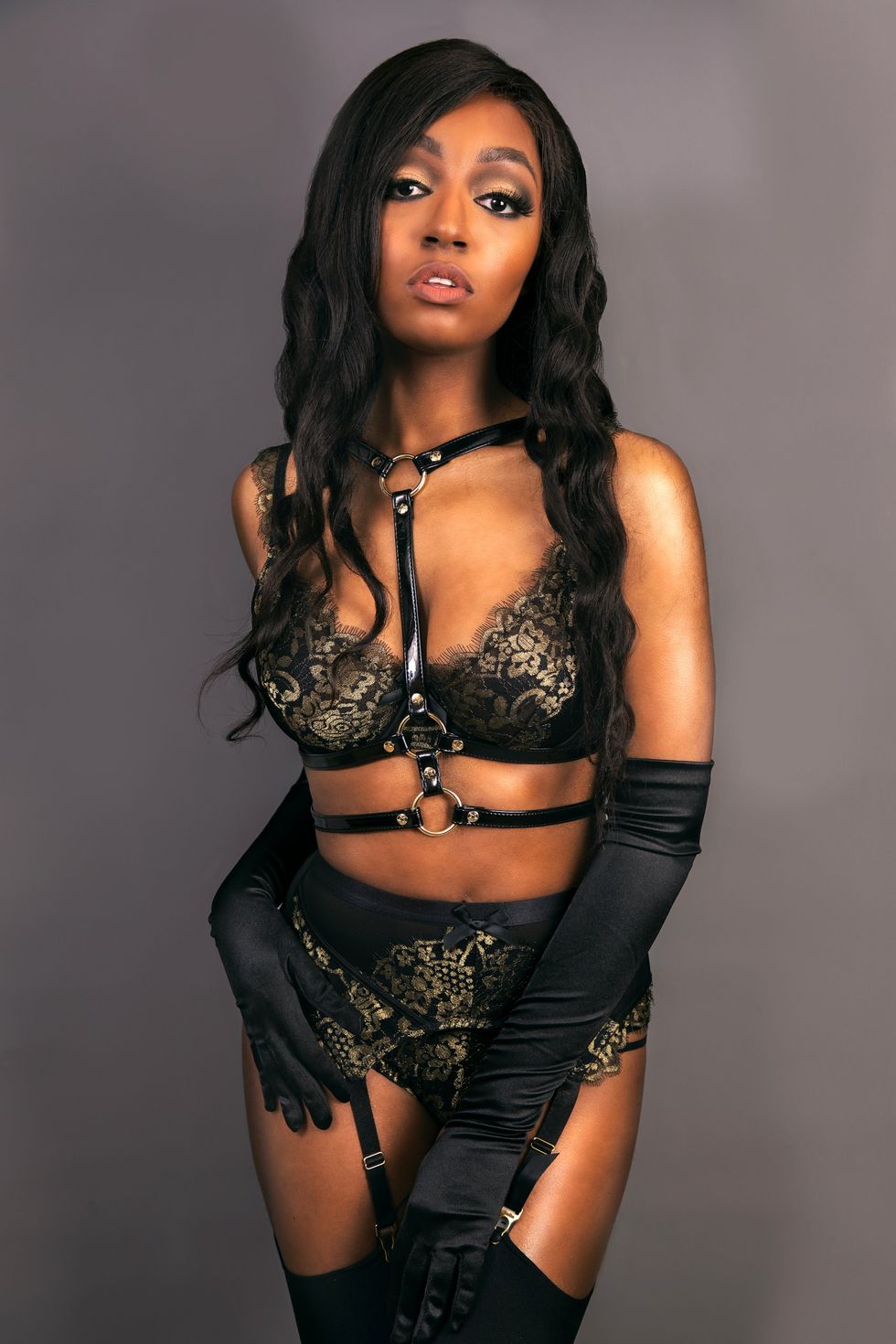 Sadly though, this sort of presumptuous projection and unfounded theorization has been happening to her from before she even figured out that there was terminology for how she felt. As Benoit says, she'd constantly be "quizzed on my sexuality" from the time she was around 9.

"Once other people around me started getting more hormonal, more into dating and going out with each other, I was like, 'This is kind of silly. I just want to stick by myself and play with my Legos,'" she recalls. "I assumed it would kick in for me, but it wasn't something I encouraged."

Unfortunately, Benoit says that once people began noticing that she "wasn't reacting to things the same way" as other girls her age — talking about her crushes or fantasizing about boys — they began coming up with theories, with some people even going so far as to tell her about their hypotheses, which ranged from theories about her being gay, a religious prude, a potential survivor of sexual abuse, or "just mentally slow."

"Because I wasn't reacting like everyone else, they concluded that I was stupid," Benoit explains, also mentioning that she's had to put up with other people assuming that she was repressing sexual trauma or that she was hiding a secret perversion. "But I just didn't understand why other people were trying to work it out for me, because there wasn't really anything to work out. I hadn't been molested. I don't have sexual hang-ups. I'm not against sex. There was nothing to work out."

That said, even once she learned about asexuality and aromanticism, that apparently "didn't stop people from coming up with theories" — including her own father, who she says recently went so far as to accuse her of pedophilia. But all the naysay has also, in part, spurred Benoit to dive into the world of activism.

As Benoit started gaining traction as a model, she began toying with the idea of mentioning her asexuality online in an effort to reach others grappling with their asexuality. This all resulted in a casual post about the topic, as well as the release of a video called "Things Asexual Girls Don't Want to Hear" — something she genuinely "didn't think people would care that much about," but ended up "spiraling, because not a lot of people talk about it."

"The asexual community was very happy to see someone with a platform discussing it," Benoit explains, later adding that she had "people messaging me how much it meant to them, which [made me feel like], if doing something so simple is really impacting people's lives, I might as well keep doing it." Benoit adds that she'd love to see more asexual and aromantic role models out there, especially since the stigma is so prevalent. After all, as Benoit explains, a lack of visibility and understanding surrounding asexuality and aromanticism makes those grappling with their identities much more hesitant to "come out" — whether we're talking about men, for whom sexual desire is "seen as such a quintessential trait of masculinity," or an asexual person who doesn't want to potentially "embarass" their romantic partner.

For now though, Benoit is doing what she can, with her most prominent push toward asexual visibility so far being a hashtag she started last year called #ThisIsWhatAsexualLooksLike, which aims to "dispel the idea that theres an asexual way to look or dress."

"People often say I don't look asexual, and I don't dress asexual, but what do you think that looks like then?" she explains. "I was trying to show the diversity of the community and, at the same time, give a tool back to others, so that they can represent themselves without relying on the media."

"There is a lot of stigma still around, so asexual people can go decades without realizing there's a word for what they're not feeling."

That said, Benoit's also quick to posit that while her asexuality and aromanticism have "never been a secret," it took her until that point to "realize I was filling a space and providing that visibility, especially for asexual minorities." That said, she also mentions that being a Black asexual activist is also an especially tenunous task, as there's a huge racial disparity when it comes to visibility.

"People perceive my asexuality differently than white asexual people," Benoit says, before mentioning the televised version of a documentary that she was cut out of — something she believes is "reflective of people higher up in the company who looked at us and was like, 'She doesn't make sense.'"

However, in the uncut version posted online, Benoit said the comments about her were much more "sexually aggressive and racialized" than what the other white activists got. "There was a lot more anger directed at me," she says. "People find it harder to compute that a Black woman can be asexual just because we're hypersexualized a lot more."

And though she acknowledges the difficulties of being a Black activist, Benoit says she's undeterred in her mission to continue spreading visibility and tackling the misconceptions and stigma surrounding asexuality and aromanticism. Her next steps? According to Benoit, she's currently working on a BBC radio series about asexuality, starring in another documentary about the topic, and potentially doing more talks at sex-positivity conferences and international Pride events. However, she's also eager to help organize more events in the UK that would provide physical spaces for asexual and aromantic people to convene and feel seen as well as supported by others.

"There is a lot of stigma [and misconception] still around, so even asexual people can go decades without realizing there's a word for what they're not feeling," Benoit says. "That has to change."

Wear Something Other Than a Smokey Eye This Valentine's Day