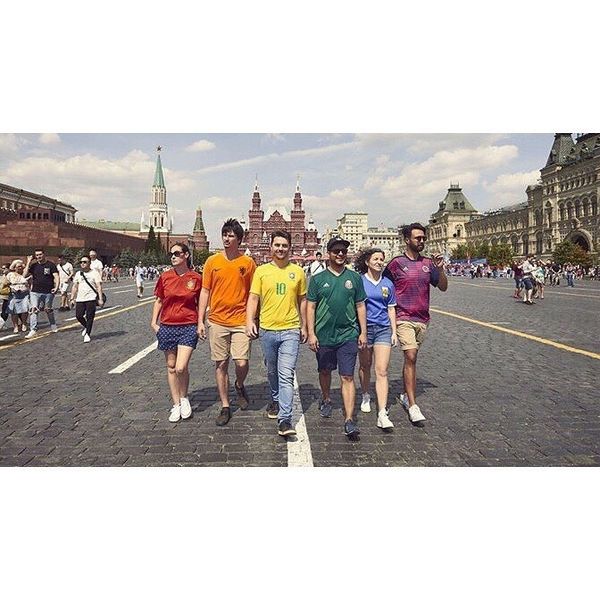 Homosexuality is still frowned upon in countries including Russia. The Guardian reports that though same sex unions were decriminalized in 1993, the country passed a ban on "propaganda of homosexuality to minors in 2013, which has been widely criticised for leading to the banning of gay pride events or discussions of gay rights in public spaces where children could be present."

Because of this, six activists decided to get creative with showing their support for the LGBTQ+ community out in the open in Moscow. They sported the football jerseys for their respective countries, which happened to form the colors of the Pride rainbow. They call their project "The Hidden Flag." "We have taken advantage of the fact the country is hosting the World Cup at the same time as Pride Month, to denounce their behaviour and take the rainbow flag to the streets of Russia," says the group on their website.

in russia, the act of displaying the LGBT flag in public can get you arrested. so these 6 activists from latin america resorted to creativity: wearing uniforms from their countries' football teams, they turned themselves into the flag and walked around moscow with pride. 🏳️🌈 pic.twitter.com/7Q2HgLemzh
— gabi (@harleivy) July 8, 2018

Last year, when the announcement was made that Russia would be hosting the World Cup, Russian Football Union official and World Cup ambassador Alexei Smertin said that LGBTQ fans would be welcome to the event. "There will definitely be no ban on wearing rainbow symbols in Russia," the former Chelsea player told The Guardian. "It's clear you can come here and not be fined for expressing feelings. The law is about propaganda to minors. I can't imagine that anyone is going to go into a school and propagate that way to children."