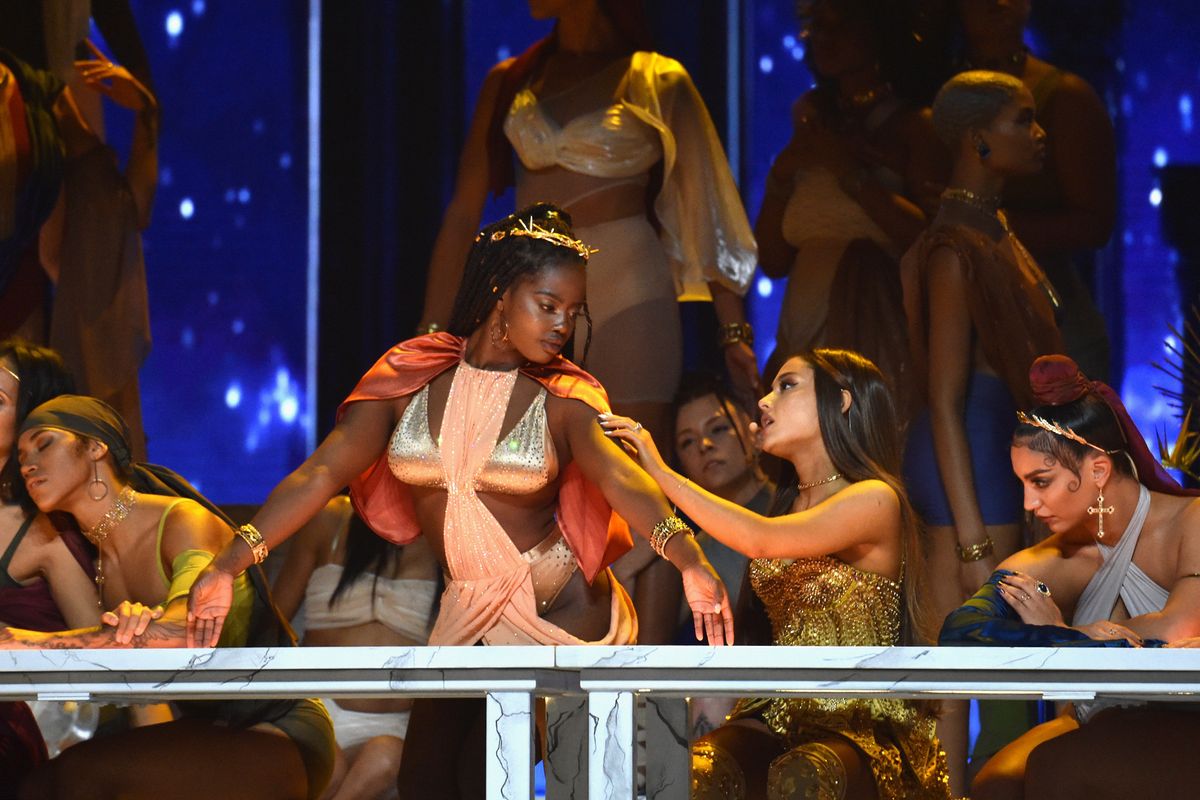 Why Weren't There More Women Performing at the VMAs?

It's a question that was on our minds last night as we watched the 2018 MTV Video Music Awards, noticing the number of men who took the pre-show and awards show stages before women sang a single note.

Though some of the women present at the ceremony received some of the night's highest honors — hi, Jennifer Lopez, Video Vanguard Award winner, and hi, Camila Cabello, Artist and Video of the Year, hi, Cardi B, Best New Artist, hi, Nicki Minaj, Best Hip Hop Artist — it was a bit strange that the performance lineup was overwhelmingly male.

I know you may read this and think: OK, so what? Men dominated the stage though women won the biggest awards. What's the big deal? Right?

Well, according to recent stats from Women In Music, a worldwide collective of women musicians across the board from songwriters and performers to producers and executives, the music industry at large is still a 70/30 split: 70% male, 30% female. Additionally, the University of Southern California released a study last spring that shed light on the fact that though women such as Rihanna, Taylor Swift, and Beyoncé dominate the charts and are wildly popular, on average women are still largely "missing" from the field.

That study, co-authored and led by Stacy Smith, director of USC's Annenberg Inclusion Initiative, which examines diversity and representation in entertainment found a staggeringly unfortunate truth: of the 600 songs surveyed charting the Billboard Hot 100 year-end charts from 2012 through 2017, there were 1,239 acts (including solo musicians, duos and bands) responsible for top-performing songs. During that analysis, it was revealed that women didn't make up even 50% of the talent surveyed — and that's just the last six years.

What felt even stranger about the gender gap at this year's VMAs is how two of the five female performers performed on decidedly smaller stages as up-and-coming acts (Jessie Reyez and PAPER cover star Hayley Kiyoko). This implies that MTV's talent bookers not only allowed the 28 men to take up loads of space on all the stages (not to say they aren't all successful or "deserving;" that is not the point here), but that "push artists," who had maybe a minute and a half to get their points across, couldn't be moved to the mainstage, so as to make room for other women, so as to allow for more voices of said women to simply be heard in the room.

What at least is better, according the USC study, is racial diversity in pop music. The study's authors wrote that of the 600 aforementioned Billboard Top 100 songs surveyed, that "8 of the 14 most successful artists were from underrepresented racial/ethnic groups." Though those 8 were mostly men, Rihanna and Nicki Minaj were the top women of color artists among women mentioned in these findings.

Not to mention, statistics of representation at the VMAs over its 20-plus year history are even more staggering.

We are of the opinion that the mainstage show-stopping performances by women were the best of the night. It's also not shocking that each performer, with these stats in mind, and while powerful in her own right, opted for stage shows that exemplified feminist rhetoric, as if to say, "We are fewer in numbers but we are mighty."

Case in point: Ariana Grande, who fittingly sang a Last Supper-staged rendition of "God Is a Woman" with a diverse crew of 50 female dancers; Nicki Minaj, who created and owned a world in which she is the queen monarch we all bow down to; Jennifer Lopez, whose audiovisual catalog is so vast and iconic it only felt right she sing a career-spanning medley.

But there were other missed marks, too. Queen of Soul Aretha Franklin died just last week, and it might be too much to ask for not only more women performers to be booked and present, but of those asked, to pull together a fitting, heart-stirring live tribute. But the way she was honored felt forced at best, ill-advised at worst.

Madonna, who didn't perform but presented a spoken tribute as though she was performing, told a long, meandering story about how she once sang Franklin's "(You Make Me Feel Like) A Natural Woman" at an audition hosted by French men performers who commented on her "rawness" and gave her a part in their touring show. It was supposed to relate and connect to Franklin's legacy, but instead one of music's most boundary-pushing women co-opted a dead black woman's legacy to justify her own. Not to mention that Madonna stood in front of a black-and-white performance photo of Franklin as she said this.

(An aside of note: to his credit, Travis Scott, a black man, was the only performer to dedicate at least something to Franklin). At least "R.E.S.P.E.C.T." was saved for the end, as the credits rolled.

And though Madonna was an example of what not to say or do when given the mic, true diversity and inclusion is all about getting in the same room as your peers, and raising your voice. (And still, even Madonna's indiscretions, while inexcusable and separate, only adds starker contrast to the fact that just three of five women were given primetime performance slots; maybe Madonna should've sung a song instead!)

But then again, there were many women who, maybe smelling what the VMAs, a once iconic and groundbreaking show, has become, possibly chose to go on vocal rest and stay home. Of course, that's assuming they were invited in the first place.