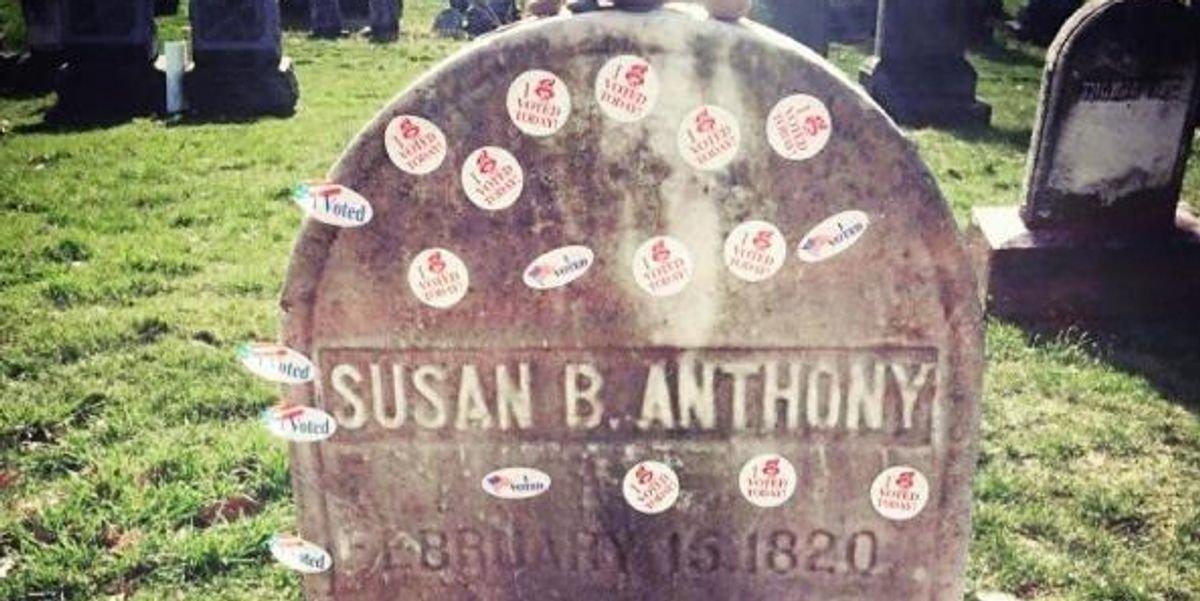 Women Are Putting Their 'I Voted' Stickers On Susan B. Anthony's Grave

Susan B. Anthony, the feminist activist, social reformer, organizer and abolitionist who played a key role in the Women's Suffrage Movement of the late 19th Century, was arrested for trying to vote in her hometown of Rochester, NY in 1872. After Anthony was arrested, and refused to pay her $100 fine, she delivered an incredible speech (which can be read in its entirety here), saying:

It was we, the people; not we, the white male citizens; nor yet we, the male citizens; but we, the whole people, who formed the Union. And we formed it, not to give the blessings of liberty, but to secure them; not to the half of ourselves and the half of our posterity, but to the whole people - women as well as men. And it is a downright mockery to talk to women of their enjoyment of the blessings of liberty while they are denied the use of the only means of securing them provided by this democratic-republican government - the ballot.

Her activism, civil disobedience, and the movement she founded along with Elizabeth Cady Stanton, is the reason that the Constitution was ultimately amended to give women the right to vote in 1920, but Anthony was never able to vote in her lifetime. Every election year in Rochester, it has become something of a tradition for women to make a pilgrimage to Anthony's gravesite at Mt. Hope Cemetery to pay their respects, and leave their 'I Voted' stickers on her grave. For this historic election day, the Mayor of Rochester, Lovely Warren, announced that the cemetery will stay open past its usual hours until the polls close. Warren said in a press release, "I can imagine she would have wanted to be part of the significant history this year's election holds for women. It's only proper that we invited Ms. Anthony to be a part of this important moment."

Susan B. Anthony was never able to vote, so women are leaving "I voted" stickers on her grave in Rochester. https://t.co/ilBUwvJqns
— Keith Boykin (@Keith Boykin)1478526060.0