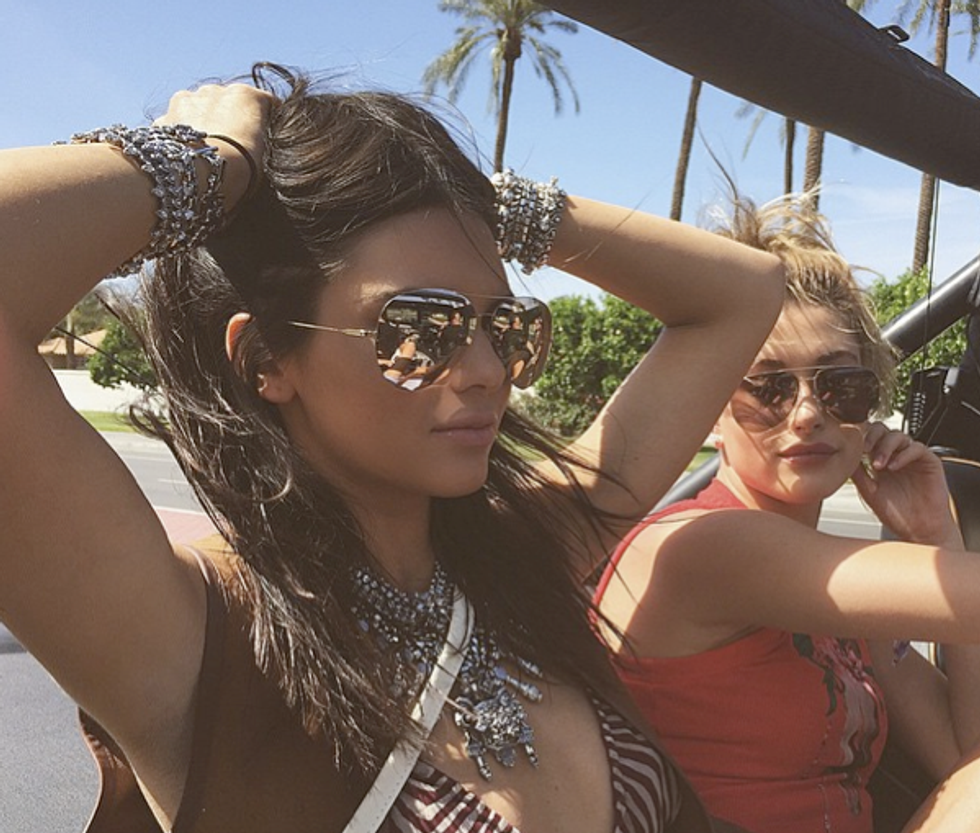 Without Vanessa Hudgens, Who Was This Year's Queen of Coachella?

Reigning Coachella Queen Vanessa Hudgens will not be in attendance this year as she is currently in New York starring in Gigi on Broadway. More than any other celebrity, Hudgens, who has been going to Coachella since 2011, has adopted the desert music festival as a personal aesthetic. No one has tassel-ed, caftan-ed or floppy hatt-ed more. And no one has stumbled harder, only to rise again like a Phoenix in a tie-dyed crop-top. Her absence is a blow to festival-goers, who will be lost without their Inland empress. But as Proverbs says, "Where there is no vision, the people perish," and a new ruler must take the throne this year to watch over the commonwealth of the Sahara and Gobi tents. Below, we choose this year's Queenchella.

Bosworth as last year's Alexander Wang / H&M Coachella party, Photo by Angela Pham/BFAnyc.com
Kate Bosworth
History: An elder stateswoman of the Empire Polo Club, Bosworth has attended every Coachella since 2009.
Looks: Bosworth's Coachella style rivals Hudgens' in its comprehensiveness and focus -- she has rocked every iteration of the '70s desert-chic look to ever be featured in a Coachella style slideshow: Cut offs with an American flag tank-top, earth-toned crochet dresses, the perennial floral romper. She's never met an ankle boot she didn't like.
Has she watched a band on someone's shoulders? Yes.
Has she ever worn an ethereal tie-dyed halter dress? Yes.
Has she ever watched a band on someone's shoulders while wearing an ethereal tie-dyed halter dress? Yes.
Dethroning odds: 8.5/10. Coachella is in Bosworth's bones.


Katy Perry wearing a crop-top with nary a flower or tassle in sight yesterday at Mia Moretti's MAC pool party. Photo by Angela Pham/BFAnyc.com

Katy Perry
History: Katy Perry has attended Coachella every year since 2010.
Looks: She wisely left tassels behind in 2010, and tries to mix it up every year. She's done straw hats, lace dresses with pearls, chiffon with combat boots, skirts with scary faces on them, and blue flower things.
Has she ever worn a caftan to Coachella? No.
Has she ever worn a flower crown: Yes.
Has she watched a band on someone's shoulders? No.
Has she ever worn an ethereal tie-dyed halter dress? No.
Dethroning odds: 5/10. Though Perry goes for very different looks each year, you can't be a Coachella Queen without consistency. Especially if you're not using your look to channel the most literal version of "we're listening to music, outdoors, just like bohemian dreamers in the '70s did." She'll never usurp the throne.

Photo via Emma Roberts' Instagram
Emma Roberts
History: Attended since 2010, possibly earlier.
Looks: A lot of cut-offs, tassels and fringe and something we've seen no other crown contenders rocking: Mesh.
Has she ever worn a caftan to Coachella? No.
Has she ever worn a flower crown? No.
Has she watched a band on someone's shoulders? No.
Has she ever worn anything tie-dyed to coachella? No
Has her presence at Coachella been documented on Just Jared? Yes.
Dethroning odds: 7/10. Coachella has existed since 1999 -- its first year was headlined by Beck and Morrissey -- but few in line for the throne likely remember the halcyon days of 2008. Roberts does. Last year, she told Style.com "The first year I went, five or six years ago, and it was much more grunge, every man for himself. And now it's like, 'Come over to the Patrone tent."


Paris Hilton
History: Coachella's biggest celebrity ride or die, Paris Hilton has attended every Coachella since 2007.
Looks: Hilton started with the obvious -- flowy skirts, flower crowns, belted Grecian-style maxi dresses -- but has gone rogue in recent years. Paris will see your cut-offs and distressed classic rock band t-shirts and raise you a black leather bikini that just has a long lace thing over it. Respect.
Has she ever worn a caftan? Yes, but it was cropped.
Has she watched a band on someone's shoulders? Yes.
Has she done peace signs in Coachella photos? Yes.
Dethroning odds: 9.89/10. A ubiquitous festival presence, Hitlon is backstage. Hilton is DJing at the Indio fairgrounds. Hilton is reminding us of Brandon Davis' existence in Google image search results. A Coachella celebrant of sorts, Hilton's credo is as smiple as A.B.C.: Always Be Coachelling.


Leonardo DiCaprio
History: Brimming with Brazilian models, Coachella is ostensibly DiCaprio's raison d'Ãªtre, but we could only find photos of him in 2011, 2013 and 2014. Do you even Gobi Tent, Leo?
Looks: Outfits you'd expect a 40-year-old millionaire to wear to a popular outdoor music festival.
Has he ever danced to MGMT during a sandstorm? Yes.
Has anyone ever dubbed "Sandstorm" over the video of him dancing to MGMT during a sandstorm? No. Everyone blew it.
Dethroning odds: 1/10. DiCaprio isn't even in the Coachella royal court, we just wanted to post that video of him dancing.

Leto at Coachella 2012. Photo by David X. Prutting/BFAnyc.com
Jared Leto
History: Jared Leto attended in 2009 and has been back every year since 2012.
Looks: Honestly, where to begin? Runyon Canyon Jesus brings it every time -- zebra tights, off-brand Illuminati t-shirts, Hawaiian shirts, shape tights  and one apparently chilly year where he wore a coat, hat and gloves.
Has he ever been captured just standing there, looking at his cell phone? Yes.
Peace signs in photos? No.
Dethroning odds: 7/10 There is no male celebrity Coachella attendee who commits harder to his look than Leto.

Photo via Kendall Jenner's Instagram.
Kylie Jenner and Kendall Jenner
History: Kylie and Kendall made their Coachella debut last year.
Looks: All-black goth desert vibes, bell bottoms cut-offs and distressed t-shirts, fanny packs, feathers, nose rings.
Have they ever watched a band on someone's shoulders? No.
Caftans? No.
Peace signs? No.
Dethroning odds: 3/10 The Jenners aren't quite there, but they're serious. Yesterday, Kendall went hard with a suede vest and a tassel purse and Kylie gave Fulll Earth Tone. They're on their way to domination.

Coachella 2012. Photo by David X. Prutting/BFAnyc.com
Alessandra Ambrosio
History: She's attended every year since 2010 and has a Coachella-inspired jewelry line
Who is Alessandra Ambrosio? A model.
Looks: Heart sunglasses, ankle boots, cut-offs, tasseled vests, tie-dye. Ambrosio understands Coachella on an intrinsic level and so does her progeny, who will continue her legacy. Her free spirit will be felt in the arid soil of the Coachella Valley plains for generations to come.
Has she ever watched a band on someone's shoulders? Yes.
Peace signs in photos? Yes.
Has her presence at Coachella been documented on Just Jared? Yes.
Dethroning odds: 9.899/10  This really isn't a joke to her.

Paris Hilton.
Knowledge comes from learning, but wisdom comes from living. And that's hot. With the most Coachellas under her belt, Hilton is most deserving of the crown. It's 2005 all over again. Bow to your queen.
You May Also Like
Music