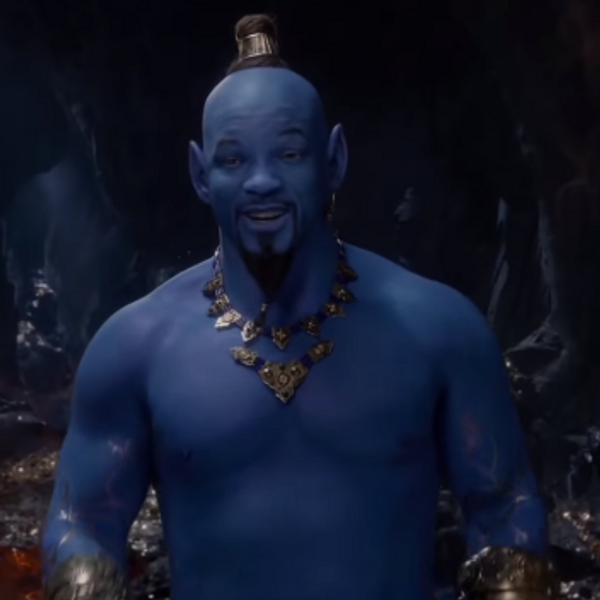 Is Will Smith’s 'Aladdin' Genie Hot?

There's something disconcerting about all these upcoming Disney reboots, right? Our animated childhood heroes have been brought back to life by Hollywood actors and CGI teams, and in some cases they're looking a little different. Last night an extended trailer finally dropped for Guy Ritchie's Aladdin — in which Will Smith takes the reins from Robin Williams as a scene-stealing genie — and people are feeling multiple types of ways about his blueness and buffness.

Smith only appears in the trailer's final seconds, but he makes an impression. First of all, as many Twitter users have observed, genie has been going to the gym. He is… surprisingly thicc, and also very digital looking. Big Blue Man Group slash Tobias Fünke energy. Is the Aladdin genie hot now? That's up to you. A matter of personal choice.

If this Will Smith Aladdin reboot is a success we’re gonna get a live action Shrek with a big green The Rock
— Mike Tunison (@Mike Tunison)1549895206.0

The memes have been relentless, obviously. Many reactions likely stem from the fact that even though Williams's 1992 genie was blue in color, Smith's animated body comes as something of a surprise — he looked way more normal when the Aladdin cast was revealed last year on the cover of Entertainment Weekly, bizarre hairpiece aside.

It turns out we all should have paid better attention: Smith apparently told fans back then that he would look different in the movie — the Entertainment Weekly shoot took place before Aladdin's CGI team had finalized their vision. The actor was very "I told you so!" on Instagram last night. Presumably after seeing all the thicc genie memes, he also posted this incredible thirst trap slideshow. Click through to the end for a special surprise:

Blue Will Smith aside, we're also excited to see Mena Massoud as Aladdin's titular character. He's one of PAPER's 100 Predictions for 2019. Aladdin hits cinemas May 24.