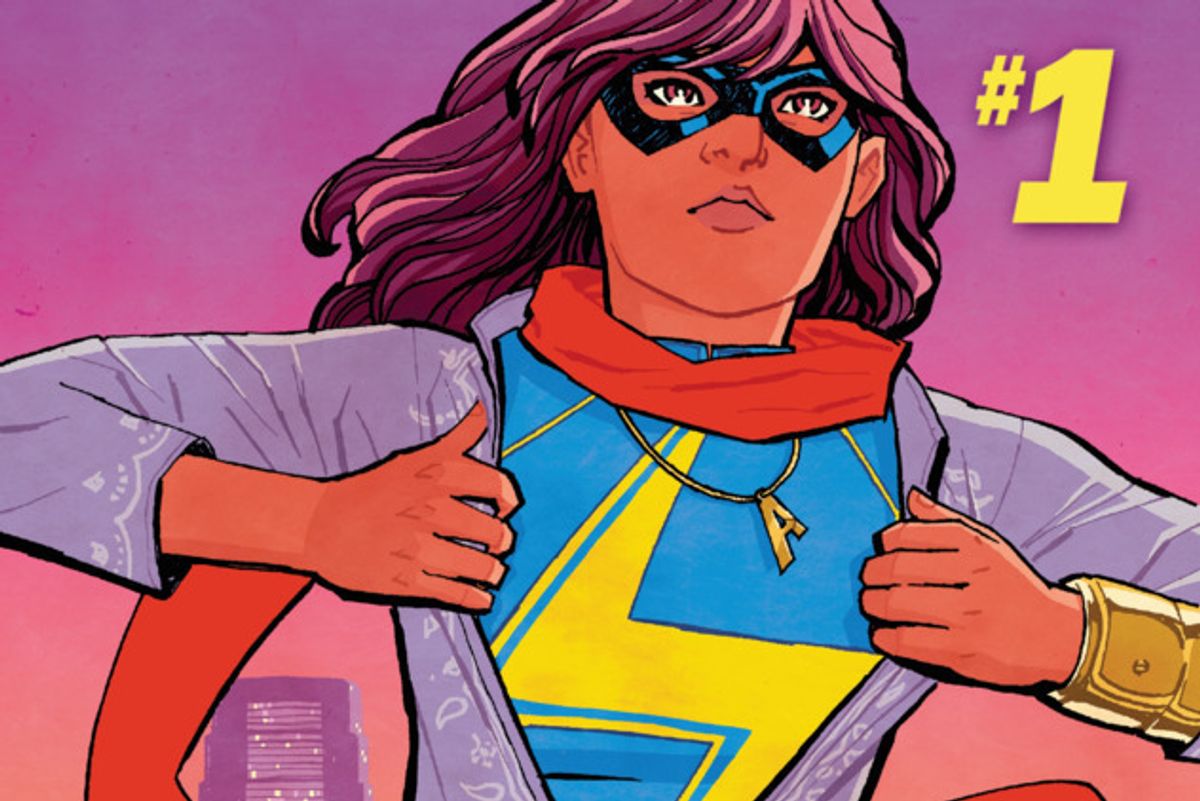 PAPER is partnering with MissMuslim, a lifestyle site dedicated to presenting the wide variety of lives and experiences of Muslim women, to feature essays from their writers. This week we have Yasmine Rukia writing about the importance of Marvel's Kamala Khan—better known as Ms. Marvel—in a Trump-led world.

The year is 1995 and I am four years old, it's the earliest memory I have of Saturday mornings. I'd descend the stairs to the blue comfy couch and park myself in front of the TV to marvel at the cartoon worlds of the Teenage Mutant Ninja Turtles, Tiny Toons, GI JOE and the X-men. Most of my childhood was spent hopelessly dreaming of becoming an X-man like Rogue. In my opinion, we had much in common: We were both female, my mom had red hair, my grandma spoke with a southern drawl and we both liked red convertible Corvettes. I didn't realize it then, but the escapism and entertainment cartoons provided me with didn't have ME in them. I didn't know that I could be cool, that I could be anything more than "other"--at least until 2014 and the introduction of the quirky and cool Ms. Marvel, Kamala Khan.

Saturday morning cartoons were already a relic of my past when the Twin Towers fell and society marked me with its own flaming mutant X--all the stigma without the flashy powers. Even as a child in my tight-knit community, I picked up that things weren't as they were before. I knew not everyone was Muslim, or had to be Muslim and that most people didn't pray at school. There was a reason I was always particularly drawn to the X-men, aside from the awesome storyline; what makes America great, like what makes the X-men great, is that not anyone is entirely the same, and our differences when working together makes the whole stronger.

Fast forward to my teenage years, when I really start to notice that characters across media who were like me didn't seem to exist without a suicide bomb strapped to their chest. I read Japanese Magna, convinced there would never be a day that I could look in the mirror and see a hero staring back. I wrote fanfiction, but it never occurred to me that I could write about myself—the most ethnic name I penned was "Alexandria," after the greatest lost library in Egypt. But now, we have the new brown girl superhero the 21st century needs -- and she's one of Marvel's best-selling titles. We might live in the era of Trump, but we also conversely live in the era of Ms. Marvel: Kamala Khan.

I was living hundreds of miles away from home, feeling ambivalent about the token Muslim I became to fit in, when Kamala Khan, a 16-year-old Pakistani girl from Jersey City, captured my heart with her debut. Brainchild of the gifted and inspiring G. Willow Wilson and editor Sana Amanat, Kamala Khan was a normal Muslim girl sneaking out of the house to go to a party her parents would never approve of when she finds herself transformed by gene-altering Terrigen Mists. With her dormant inhuman traits activated she becomes a badass shapeshifter and inherits the legacy of Carol Danvers (Captain Marvel).

The first issue alone illustrated the pulls and pushes I have felt my whole life growing up as an Arab-American Muslim girl. Strict supportive parents with old country wisdom, stricter curfews and unapologetic 'brothers' from the community asserting their holy supremacy with cherry-picked verses. Not-Normal me felt normal for the first time in a long time. It made me believe that what Wilson set out to do in Ms. Marvel, "make a story in which the Muslim woman narrates her own life," could be the norm in the not-so distant future.

The light-hearted and quirky Miyazki-esque mechanics of the first arc were delightful and artful. Kamala teams up with intergalactic dog Lockjaw, takes selfies with her idols (see iconic issue cover 07, with her and Wolverine) and tries to strike a balance between making her family proud and navigating her life as a super-powered teenaged girl. Ms. Marvel not only breaks stereotypes of cookie-cutter Muslim girls but also of superheroes who deny themselves necessary emotional connections because of their powers. Kamala's true-hero altruism opposed to anti-hero vengeance is a breath of fresh air in comic narratives. She is fiercely humanitarian, selectively violent and staunchly feminist.

When faced with saving a life for the first time in Issue 01, Kamala quotes the Quran and it gives me gooseflesh every. Single. Time. "And whoever saves one person - it is as if he had saved all of mankind" (5:32). It's a powerful but subtle reminder that my religion has been hijacked by geo-politics and that Islamophobia, despite being a constant reality for Muslims right now, isn't irreversible. People are seeing us for the first time as not wholly "other." We, for the first time are seeing ourselves as "us" more and more, and not a default "them."

The year is 2017, and in the Era of Trump, we are all Kamala Khans waiting to happen.