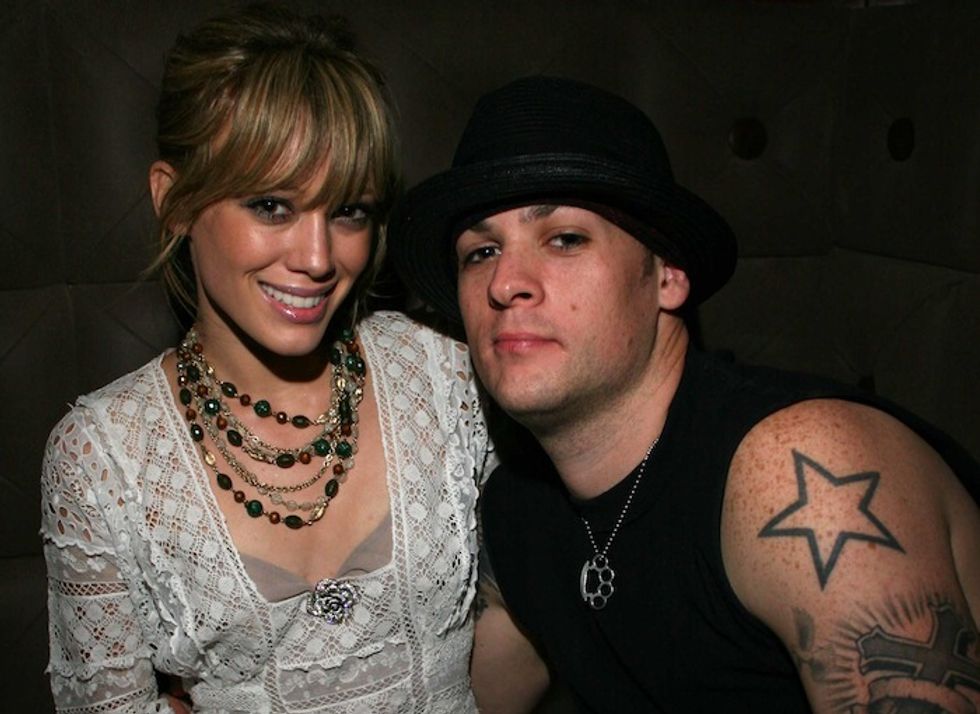 Why Didn't We Have a Bigger Problem With Joel Madden Dating a Teenage Hilary Duff?

by Abby Schreiber
PAPERMAG
Hilary Duff and Joel Madden. (Photo by Patrick McMullan/patrickmcmullan.com)
In her recent cover story for Cosmopolitan Hilary Duff discussed, among other things, her underage romance with Good Charlotte rocker (and Mr. Nicole Richie), Joel Madden. The interview didn't include anything super revelatory about their relationship, which lasted for three years and began when Duff was 16 and Madden was 24, other than the fact that she (probably) lost her virginity to him. Duff said to Cosmo:

"I had a 26-year-old boyfriend, so everyone can make their own assumptions about what I was doing."

While we'd forgotten about this mid-aughts love story, as soon as it re-entered our brains, we immediately wondered, "Why didn't more people have a problem with a twentysomething dating a teenager?" Was this just a case of misremembering what happened -- or what was reported -- ten years ago? Doubtful. Several Google searches focusing on articles published during the time in question -- roughly 2002-2006 (just to give the results a wide berth) -- turned up very few hits that made any reference to things like "underage" or "illegal," save for one USA Today piece from 2004.

Similarly, other well-known examples of adult men dating female teenagers back in the day (17-year-old Lindsay Lohan dating 24-year-old Wilmer Valderrama or 17-year-old Hayden Panettiere dating 29-year-old Milo Ventimiglia, for example) elicited very little finger-wagging by the press. For every time that a publication like Vibe Magazine called out the inappropriateness of R. Kelly's relationship with (or supposed marriage to) a 15-year-old Aaliyah, there were many more examples of outlets seemingly condoning these kinds of matches.

Take Jerry Seinfeld's relationship with Shoshanna Lonstein, which began after he hit on the then-17-year-old private school student in Central Park. Though Howard Stern ribbed Seinfeld for his behavior, People Magazine took a different tack back in 1994:

"What distance there is between them on life's time line, it seems, they more than make up for with a similar temperament...The Lonsteins have always approved of the romance. 'Shoshanna is very mature,' says a source close to the family. 'Jerry is thoughtful, a good person. The family have nothing but positive feelings about the both of them. Everyone respects their relationship.'

They close the piece with this nice little turn of phrase:

"[Seinfeld] seems serene, a man whose conscience is as clean as his Nikes. 'When I wasn't involved with Shoshanna and was seeing several women, then it was awkward,' he says. 'You go out with one girl and the other sees you with her in the paper. That was uncomfortable. Now I'm not doing anything I'm uncomfortable with. My interest in her is very proper.'

Whatever people actually thought about these couplings, there was very little of the media indignation we see today when outlets discuss the relationships (or rumored relationships) between celebrities like, say, 17-year-old Kylie Jenner and 25-year-old Tyga.

Obviously, a lot of this has to do with the rise of the Internet. The crazy proliferation of gossip sites, news outlets, blogs and social media platforms over the last few years means that there's many more voices chiming in about any given gossip story and many more opinions (good, bad, ugly) being expressed. People Magazine and Page Six aren't the loudest voices in the room anymore -- not when you have Amber Rose on Twitter.

What's equally, if not more, important is the fact that the Internet has made the whole publicist-as-gatekeeper-slash-crisis manager-slash-spin doctor outmoded. Sure, mainstream publications still value their good relationships with publicists, who can provide them access to (or freeze them from) their famous clients, but when you have Reddit, Tumblr, and various celebrities going rogue on Twitter, it's clear just how limited a PR firm's control over the conversation actually is.

There's also the possibility that many of the editors running gossip and celebrity sites today are Gen Xers or Millennials who came of age hearing about the uncomfortable-sounding romances by the aformentioned Aaliyah and R. Kelly or Woody Allen and Soon-Yi, whereas their Baby Boomer predecessors grew up during a time when the only thing depressing about a twentysomething Elvis Presley dating a teenage Priscilla was that the King of Rock was off the market.

Or, you know, maybe years of looking at "Stars -- They're Just Like Us!" columns have finally hammered home the message that, yes, stars are just like us. And just because a 16-year-old might be famous, that doesn't mean her relationship with a full-blown adult isn't any less problematic than the relationship between that girl in your sophomore U.S. History class and her 27-year-old boyfriend, Kevin, whom she met at her after-school job hostessing at the Cheesecake Factory.

Whatever the case may be and whatever is (or isn't) going on between Kylie and Tyga, let's hope that the youngest Jenner doesn't wake up in ten years, get interviewed by a magazine, and give the kind of coy non-statement about her former relationship that has the same whiffs of thinly-veiled regret as Duff's.
You May Also Like
Fashion