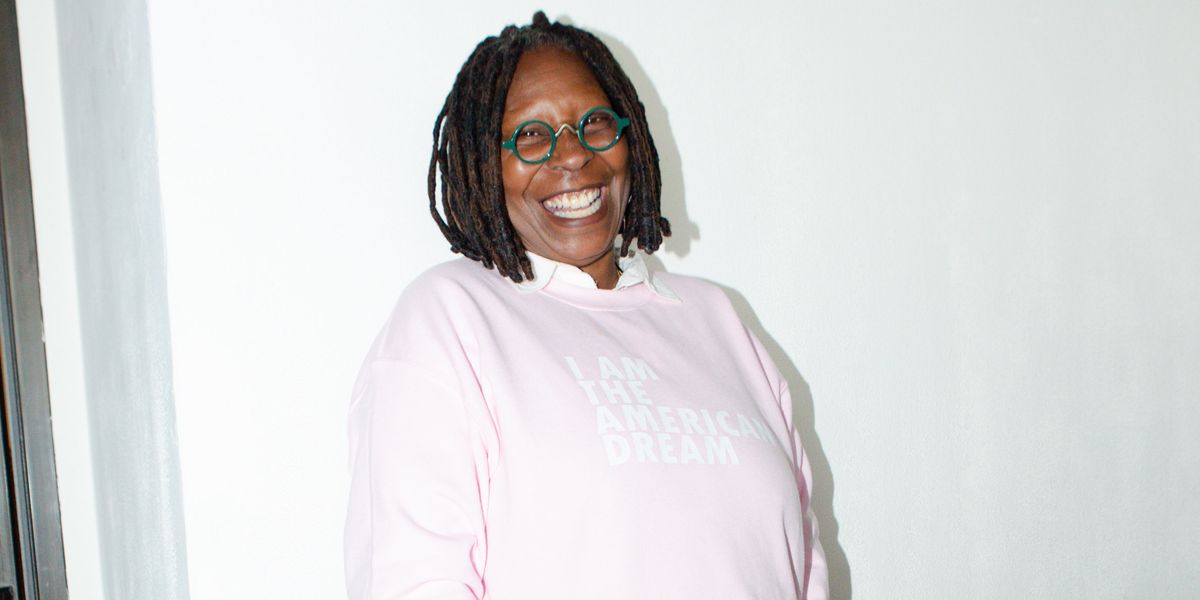 Whoopi Goldberg Is Always the Best Person at NYFW

At Eckhaus Latta's show last season, I gingerly approached the god Whoopi Goldberg and asked what she thought of it. Whoopi put her hand on my shoulder. She smiled. She told me that the show felt lighter then it had in the past, that it was "great to feel lightness in these tough times." She told me that she hoped I was having a nice day. And just like that, I was.

There are so many celebrities at New York Fashion Week. Too many. They travel in little clusters — depending on how big the star is, they tend to be accompanied by a stylist, a publicist, a best friend, a boyfriend, a Fonzworth Bentley — and you can always tell when they've entered a venue because seizure-inducing camera flashbulbs start going off everywhere. There are stars you see every season, the ones you expect to see: Kim Kardashian, Paris Hilton, Nicki Minaj. There are the stars who actually seem to be having fun: Cardi B, Kim Petras, Rihanna. And then there is my favorite. There is Whoopi.

Whoopi is a fashion week institution, the rare constant attendee who just fucking loves it. She comes to everything, especially smaller, independent shows that don't attract stars of her stature. She was an early supporter of Rio Uribe of Gypsy Sport, of Eckhaus, of Opening Ceremony. I used to see her daily when working as a fashion assistant at MADE Fashion Week at Milk Studios, an incubator for emerging designers. Whoopi showed up for designers nobody had ever heard of, designers with no money, designers who were too weird to succeed. She smiles and is unfailingly kind. She has a minute for every reporter who asks. She makes self-deprecating jokes about not being able to wear the clothes (we laughed once about our respective inabilities to expose our midriffs). She brings her granddaughter and eagerly points out the things she likes, that she thinks might look good on her. She let one of my best friends recite part of a presentation she had written for a high school speech class about her inimitable career, titled "Whoop! There It Is."

During the spring 2018 season, Whoopi reviewed shows for Interview Magazine, a concept venerable novelist and T Magazine editor-in-chief Hanya Yanagihara called "genius." Her assessments were both sharp and reflective of genuine enthusiasm. One of her favorites was Becca McCharen-Tran's Chromat, which features consistently inclusive casting. "This was the most brilliant show for me because it really represented every body type, every style — the variations on color, the variations on differences of the body," she said. "This says to everyone, 'I have a place for you. I have a bathing suit for you. And you can look amazing coming down any beach front.' It was thrilling." And when Whoopi is thrilled at a fashion show, which seems to be most of the time, I am also thrilled.

In last summer's big hip book, My Year of Rest and Relaxation, Whoopi serves as a beloved touchstone for a parentless, numbed out protagonist. It's reflective of tendentious author Otessa Moshfegh's own obsession with the star (she just profiled Whoopi for Garage Magazine's brand-new issue). As she told Entertainment Weekly, "There's something so authentic about [Goldberg's] presence onscreen that when I'm watching her I feel like I'm seeing Whoopi Goldberg, the real person, on set. It's like she's looking through the camera directly at me and winking to say, 'we all know this isn't real.'"

Moshfegh, who is probably a genius, nailed the essence of Whoopi's appeal. In the midst of the artifice of fashion week, there she is, smiling and winking. We all know it isn't real. But at least she's having fun.