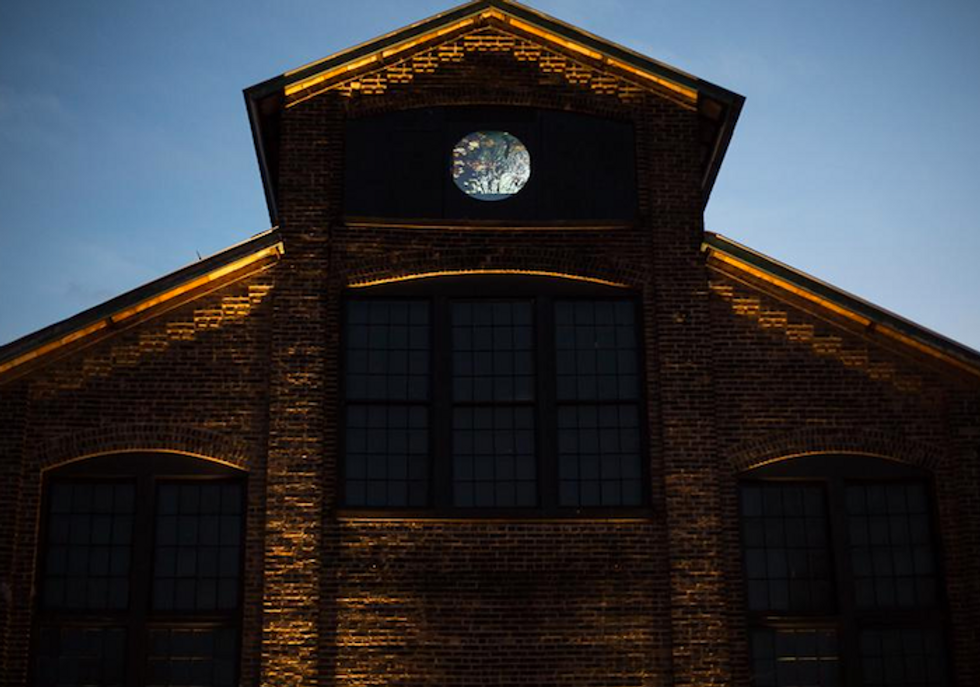 Who To See This Weekend At Basilica Soundscape

By Jamie E. Peck
PAPERMAG
Deafheaven at Basilica Soundscape 2014 / photos by Kevin Shea Adams
How do I love Basilica Soundscape? Let me count the ways. Since its first installment in 2012, this impeccably curated multimedia festival has brought hundreds of people to Hudson, New York each fall for a weekend of food, art, film, music and magic. Lovingly produced by former Hole bassist/Renaissance woman Melissa Auf der Maur and her husband Tony Stone (who own the cathedral-esque former factory in which it takes place), it's also done in collaboration with Pitchfork Managing Editor Brandon Stosuy and Brian DeRan of Leg Up Management, so obviously the line-up kills. Some call it "the anti-festival festival" for its resistance to the culture that inspired this Onion article, but maybe it's time to reclaim that term--which, after all, originated from the Middle English word for "spiritual feast" and not "corporate mud pit into which you throw money in hope of glimpsing a Lindsay Lohan nip slip."
Once again, this year's Soundscape presents a diverse array of lovely and intense music and challenges attendees to listen actively and find the threads between them. Here are some of the highlights; and if they sound good to you, tickets are still available.
Jenny Hval
Inventor of the term "soft dick rock," this Norwegian singer-songwriter is committed to asking playful questions about serious topics like gender, capitalism and the nature of art in her delicious purr over music that ranges from wiry "free rock" to meandering, pop-inflected jams. She recently expanded her live act to include video projections and performance artists; think of it as a fun Jazzercise class for your brain.
Wolf Eyes
Formed back in 1996, Detroit's post-industrial noise heroes are known for conjuring the grinding sounds of the robo-apocalypse from hacked electronics worn like traditional rock instruments. Their sick, lurching grooves should be a good follow up to those of last year's headliner Swans. This is music so dark and insane you won't be able to tell if your drugs are working until after they finish.
Indrajit Banerjee & Gourisankar
Basilica Soundscape always has one world music act a lot of people in attendance might not discover otherwise. That might seem token-istic, but it works with the music's spiritual aspects, calling out to other modes of transcendence at play over the weekend. And this should be especially true of the sitar and tabla concert happening this year; Banerjee trained under his uncle Pandit Kartick Kumar, a senior disciple of the one and only Ravi Shankar.
Viet Cong
I feel like people use "post-punk" nowadays as shorthand for "bands that sound like Joy Division," and Viet Cong do have that winning combo of gloom and bounce. But there's a lot more going on here -- like touches of psych and lo-fi scuzz, and even some nice vocal harmonies.
HEALTH
These Los Angeles noise-rockers are experts at combining industrial harshness, pop melody, and good old-fashioned showmanship to create a mind-blowing live spectacle. Should provide a satisfying climax to the first night. Not recommended for those sensitive to strobes or sweaty dancing.
The Haxan Cloak
The solo project of multi-instrumentalist and producer Bobby Krlic, The Haxan Cloak deals in slow-building electronic compositions that make you feel like you're a character in a Swedish horror movie. Heavy bass and foreboding atmosphere masterfully evoke the monster you don't see. Should lend itself especially well to the gothic, cavernous space.
Triangle Trio
"A drumming outfit comprised of Chris Corsano, Otto Hauser and Ryan Sawyer created exclusively for Basilica SoundScape." You won't see this super group anywhere else. Judging from who's involved, it will be loud and weird and very good.
Sannhet
For the uninitiated, this post-rock, post-metal, post-everything band is surprisingly listenable for something so loud, brutal and prog-y...much like last year's Deafheaven. Pairs well with a discrete one-hitter.
Perfume Genius
Although he's been making music under the name Perfume Genius since 2008, Mike Hadreas had a real breakthrough in 2014 with his third album Too Bright, which deals with issues like abuse, illness and gay identity through delicately sung piano ballads and the odd surprise banger like lead single "Queen." Come for the heartbreaking falsetto, stay for the thoughtful lyrics.
Bunnybrains Pop-Up
Don't sleep on the Bunnybrains Pop-Up shop out back. In addition to selling books and displaying art, it plays host to all kinds of experimental weirdness. Of particular note: Kill Alters w/ Soft Circle, Meshell Ndegeocello/Ryan Sawyer/Elliott Krimsky Trio, and Brian Gibson of Lightning Bolt's new video game THUMPER.
After Parties
One less touted aspect of Basilica Soundscape are the nightly after parties at nearby watering hole The Half Moon Pub. But make no mistake, these pop off, with artists, fans, and bookers alike getting down to hot jams well into the wee hours. This year's DJs include Ephraim Asili, gay metal DJ collective Rainbow in the Dark and The Haxan Cloak himself. Don't be scared to talk to your favorite musician; he/she is probably normal and nice.