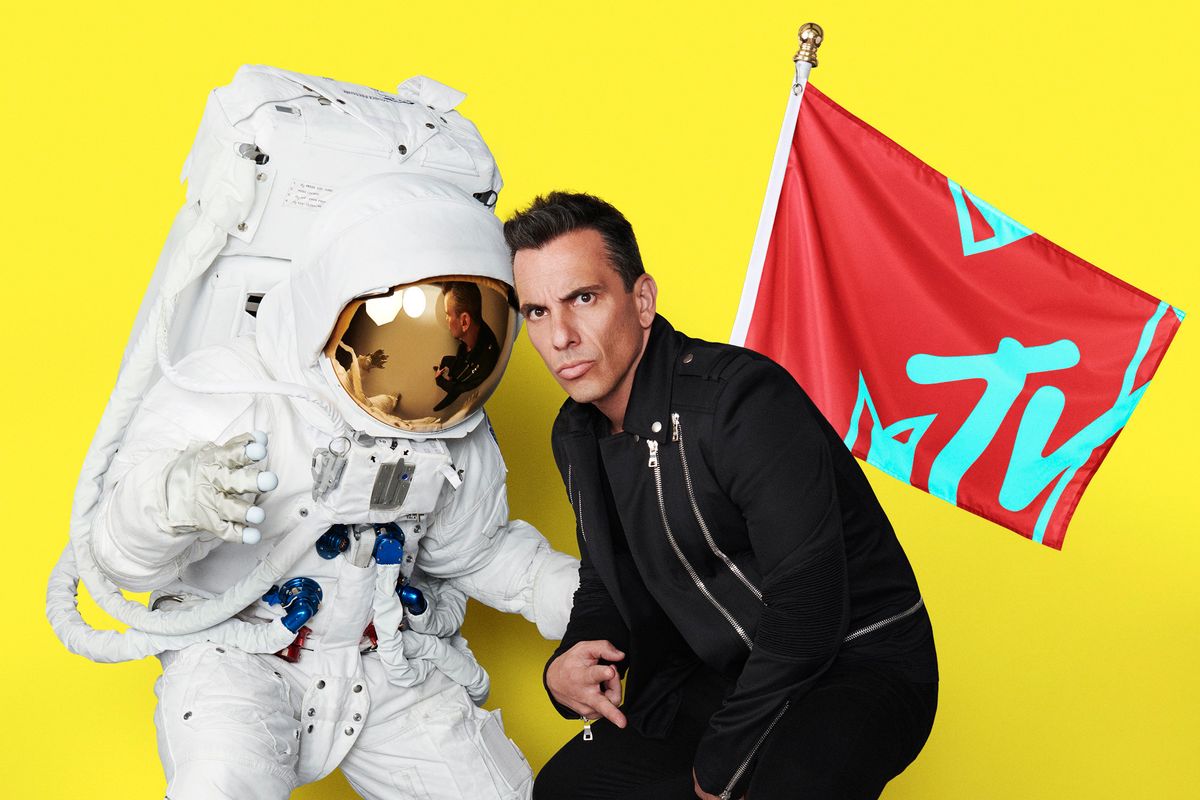 Who Is VMAs Host Sebastian Maniscalco?

No awards ceremony can rival the MTV VMAs for number of controversial contributions to pop culture. The Oscars have glitz and the Grammys have classic rock icons, but the VMAs have Britney and Madonna making out and Kanye interrupting Taylor and Fiona Apple calling out music industry bullshit on live TV. There's usually at least one not-so-subtly planned publicity stunt to keep viewers interested, which makes hosting the show a stressful and intimidating proposition.

This is presumably why MTV avoided giving a TikTok star this year's gig and assigned an industry pro instead. Comedian and actor Sebastian Maniscalco might not be king of the teens, but he's a seasoned entertainer with the Netflix specials to prove it. He's an adult who you can trust to look after Lil Nas X and Billie Eilish backstage, even if he has to quickly read their Wikipedia bios first.

Ahead of the big event in Newark tonight, PAPER met with Maniscalco to hear more about what we can expect from his monologues.

PAPER: Congratulations on hosting this year's VMAs! How'd you end up scoring the gig?

Sebastian Maniscalco: MTV just approached me and asked me if I was interested in hosting, and at first I didn't jump at the chance just because it's something that was out of my wheelhouse and I had never hosted anything before. The demographic was a little younger, but after I thought about it and what an honor it was to be even asked to do it, to challenge myself performing in front of an audience, I just decided to do it. I would be lying to you if I said I wasn't nervous for the unknown, but I kind of thrive off that.

The VMAs haven't had a host since Katy Perry in 2017. How will your show differ from hers?

I haven't watched a lot of host's tapes, so I haven't seen what she did, but it's going to be my brand of humor with the VMAs through my eyes. I'm not going to be doing sketches or anything like that, I'm basically gonna come out, do an opening monologue, and for the rest of the show either come out and comment on what I just saw or have a joke leading into the next presenters. My style is not to rip into the audience. I don't know a lot of musicians, so it doesn't really bode well when you start ripping people to shreds that you don't even know. It's gonna be my brand of humor, and a more observational style with a little bit of an attitude.

Have you watched VMAs shows in the past?

Yeah, I grew up watching Madonna and Prince and Michael Jackson, all of those performers, it was part of my upbringing. MTV was my introduction to current music at the time. Videos were new and exciting, not that it's not new now, but no one really saw that until MTV. For me it's a bit of nostalgia, and I feel that this is a proud moment because it's so different from anything I've ever done before.

Did you have to google any of the nominees?

Yes. I just watched Normani's video last night, I did not know who that was, or Lizzo. I'm the type of guy that knows the song but I don't know a) who sings it and b) where they're from. I didn't know that Normani was a part of the group Fifth Harmony and I think Camila Cabello was a part of that group as well.

Yeah, I'm learning. I know it from afar, but a lot of the artists I did not know, like A$AP Ferg, I looked at him last night, I know the Jonas Brothers, I know Taylor Swift, I know DJ Khaled and his son Asahd. I'm aware of it but I don't know whose throwing shade at who. I just figured out what shade meant actually, so it's been a learning experience for me.

This could definitely be the night you see shade up close. What other research have you been doing? Do you know the lyrics to "Old Town Road"?

I do not. I know it's been on the charts for 19 straight weeks, and it just got bumped off by Billie Eillish I believe, but I do not know the words. I don't know the words to a lot of songs. Music is not a huge part of my life, I obviously listen to it, but there's a lot of people that know the lyrics, the meaning of the song, the artist, what they went through, and I never got into music in the way where it extracted a lot of my time, but I listen to it. I like to dance though.

Is there anyone that you're excited to meet?

I want a chance to meet Taylor Swift, she's extremely talented, I think DJ Khaled is a character, I would like to meet him. I'd like to meet a lot of different artists. I would love to meet Missy Elliott, I grew up on her and she's getting the Vanguard Award.

A lot of your comedy is about being Italian-American — are you rooting for Ariana Grande?

Yeah, anytime an Italian American picks up an award or gets recognized, it's nice to see. I'm proud to be Italian, it's where most of my jokes come from. Coming from an immigrant family, my father came here when he was fifteen years old, so I think a lot of people find it funny how I grew up and the way I grew up. You don't have to be Italian to get it, it's just that parental relationship that a lot of kids have and it mirrors in different cultures. I'm just happy to be Italian.

In 2010, Lady Gaga famously wore a dress made out of meat to the VMAs. Who do you think will wear the meat dress of 2019?

Lady Gaga is one of those artists that I think is so original that I don't know if someone would try that. Those artists come every thirty years, it's kind of like Madonna. I don't know the personalities that well to know whether or not Normani is into fashion and she's going to come in something extravagant. I don't know if there's a meat wearing artist in this thing.

Someone better at least try! What are you going to do when you meet Billie Eilish?

It's funny because I'm a Justin Bieber fan and I know she is too. I'm very laid back and a little shy. I'm not Mr. Personality when it comes to meeting a lot of people. Although people like to think that comedians are the life of the party, I kind of prefer to listen rather than speak. My speaking is done in front of thousands of strangers rather than intimate close settings. I keep it cordial, but you know she's a young girl, only 17, and to have the success that she has at such a young age is remarkable. We'll see.

One of the most iconic VMAs performances ever involved Britney Spears and a live snake. Can you confirm or deny the presence of any live animals on stage this year?

Well, it would be unbelievable if Lil Nas came out on a horse. That's the only animal that I know of that is associated in any song at the VMAs right now.

A few years ago Miley Cyrus hosted the VMAs. She and Nicki Minaj were publicly feuding at the time, and when Nicki came on stage to accept an award, she called out Miley and it was a whole thing. What would you do if something like that happened to you?

I don't see any of that happening with me. I'm not the type of guy to make fun of anybody like that. If I know the person and if we are going back and forth, cool, but I got no beef with anybody, and even on Twitter, there's a lot of negativity and if people are trying to start something I never engage with any of that. It fuels the fire, and if you don't respond it just dies down.

That's a good attitude to have. Do you remember when Kanye West interrupted Taylor Swift? How as a host would you go about navigating that situation?

With those things the best reaction would be in the moment, but with something like that as a host you kind of just need to keep the show on track, and maybe comment about it in a joking way and tease them a little bit, and keep moving.

You said you were a Taylor Swift fan — do you have a favorite album or era of hers?

Again, don't know any albums or songs by names. I think she started as a country star that migrated over to pop and plays instruments. Prince not only sang but he played 27 instruments, so I really respect the musicians who do a lot of different things, and I don't have a favorite album although I just watched the video "Calm Down," which I thought was very colorful and fun.

Do you have a favorite Jonas Brother?

I think if I'm not mistaken Nick came to one of my shows at the group theater in Los Angeles, so he's my favorite. I didn't get a chance to meet him, but I heard he was there. Is there a John Jonas?

There is not. What song do you hope Missy Elliott performs on stage tonight?

I think the song is called "Get Your Freak On"? That's one of my favorites.

Given these are the Video Music Awards, what do you think is the best music video of all time?

I have to say "Thriller" by Michael Jackson. It's the birth of MTV, he really set the standard for videos and now everybody is trying to copy him. I was a Bon Jovi fan too when I was growing up, he had great videos.

Final question: what message do you have for your new teenage fan base?

A lot of teenagers come to my show and I think what gravitates them towards me is the facial expressions and the physicality of the humor, so just expect more of that. It's nice, it's multi-generational for me, because I have fans from the 80s and fans that are eight. A lot of parents send me videos of their kids imitating what I do on stage. With the physical faces and the voices. It's nice and I'm flattered that people imitate what I do, and at the VMAs I'm just gonna get more of that.

Thank you. I'm excited too. It should be an interesting night. And it's live too, it's not like a normal show where I go out and I have a set list that's been proven to work. This is material that I haven't tried yet. I'll definitely be very happy August 27th.