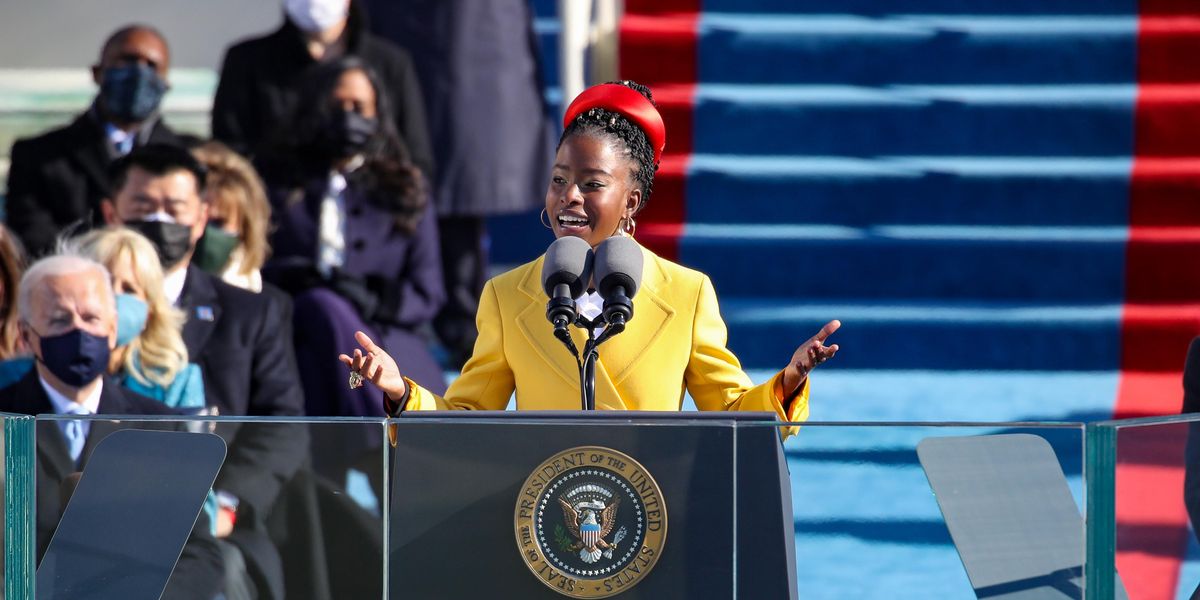 If you've been watching the inauguration proceedings today, you were probably awestruck by 22-year-old poet Amanda Gorman. Reading a brand-new work titled "The Hill We Climb," which she finished in the wake of the Capitol riots, Gorman captured the moment in a way no other performer could. (All apologies to Lady Gaga.)

Wearing a yellow Prada coat and jewelry GIFTED TO HER BY OPRAH (!), Gorman's reading was wonderfully moving, both acknowledging the pain that we currently find ourselves in while holding out optimism for the future: "We turn our gazes not to what stands between us / But what stands before us."

Her look was inspired by a previous inauguration poet: Maya Angelou. According to an interview with Vogue, Winfrey got in touch with Gorman after learning she would read at the ceremony, and helped craft a contemporary spin on what Angelou wore while reading at Bill Clinton's inauguration in 1993. She had also gifted Angelou's 1993 black coat and gloves.

Gorman's poetic credentials are pretty amazing: after being named the Youth Poet Laureate of Los Angeles in 2014, she was the first US National Youth Poet Laureate in 2017. It was Dr Jill Biden who scouted her for the inauguration, getting in touch with the poet last month after seeing a video of Gorman reading her work "In This Place: An American Lyric" at the Library of Congress in 2017.

Preparing a brand-new poem during an extremely tumultuous month, to read in front of the entire world during a ceremony that faced significant security threats? Surely not an easy task, but she nailed it.

It's not usual to invite poets to perform at presidential inaugurations; Trump definitely didn't call up anyone to read verse at his. Gorman more than proved that poets have a place on days like this. Let's make it tradition!