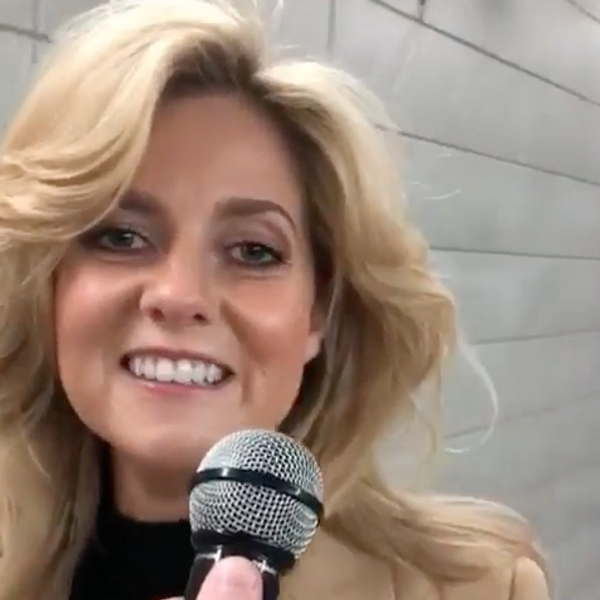 If you've been on the internet this week, you've probably seen a 40-second clip of a big-haired blonde lady belting out a perfect, impromptu rendition of Lady Gaga's "Shallow" in a train station.

This woman's name is Charlotte Awbery. The world learned of her talents this week thanks to British comedian/social media stuntman Kevin Freshwater, who was going around (Billy on the Street-style) asking people to "finish the lyric." Ten seconds after he prompted Awbery with: "Tell me something girl," Awbery was chorus-deep in "Shallow," slaying the song's hardest riff, while continuing to stroll towards her train holding a coffee.

The video did the viral rounds this week: clicks and shares spurred on by the fact that Awbery is irresistibly charming, and the meta way the clip mimics A Star Is Born. I mean... that happy little smile when she hits the note on "Or do you need more." And the way she says thank you at the end? Lady Gaga is shaking! Just kidding. The Little Monsters are quite pleased with Awbery: her performance went so viral that "Shallow" actually re-entered the iTunes charts this week.

So is Awbery the real life Ally? Is this random British comedian her Jackson Maine? Will she soon have an army of stans called Charlovers? Here's what we know about the vocal genius and internet sensation.

Who is Charlotte Awbery?

Charlotte is a 30-year-old London-based singer (Freshwater came across her in a London tube station). Her profession has led some to wonder if the video was staged. Can't blame people for asking, after Lil Nas X owned up to engineering "Old Town Road" for maximum memeability and we found out that Left Shark deliberately flubbed that Superbowl choreo. However, we have no actual evidence implying that the video is anything other than a beautiful twist of fate.

Based on Instagram, Charlotte specializes in pop covers of folks like Prince, Celine Dion, Sia, and even Gaga, for weddings, events and parties. Ballads are her thing!

Here's her serving DRAMA on "Somewhere Over the Rainbow."

Coming for Ari's crown with "No Tears Left To Cry."

Why are people obsessed with her?

Aside from being a many-ranged legend, she's also a normcore fashion icon with huge hair and a tiny waist, who serves Princess Diana, Dolly Parton and all of the Bachelorettes at once. Bring back bandage dresses in 2020, if only for Charlotte!

What's next for Charlotte?

She went from having under 10,000 followers on Instagram to 286,000 and counting in two days. Surely in our Kardashian-Jenner age, she'll be able to monetize that somehow! Whether with a record deal, just booking more wedding gigs, or with fashion sponcon. Hey, I mean Lana just cancelled her European tour...