Who Are the Villagers? And Other Questions about Twitter Music 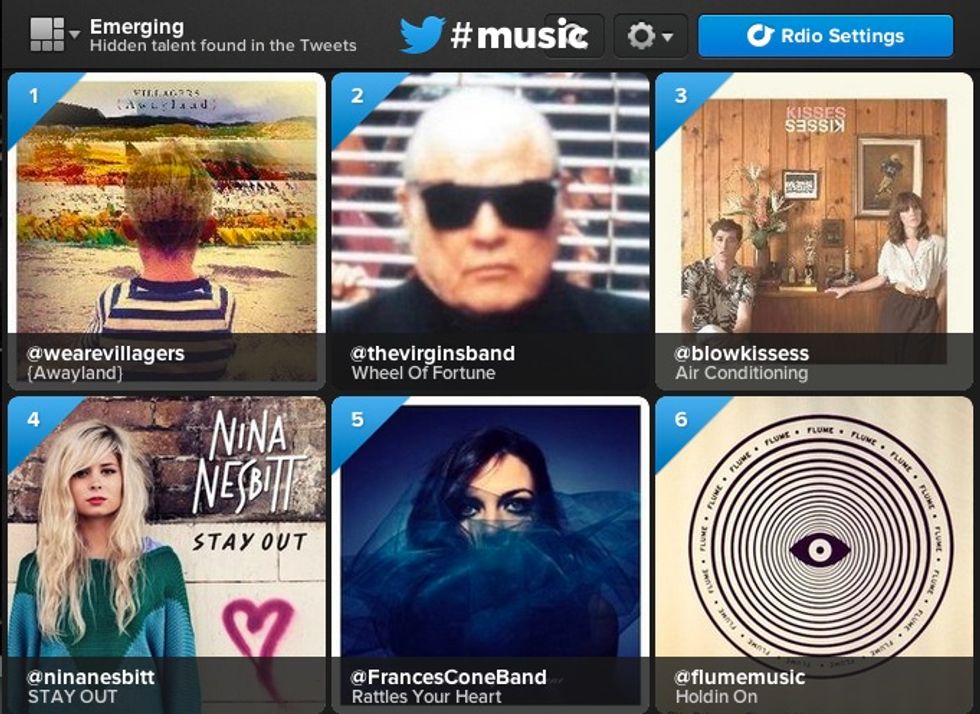 After Twitter's public acquisition of music start-up We Are Hunted, a protracted roll-out during which celebrities like Ryan Seacrest tweeted their enthusiasm for the new music service and, finally, Twitter Music's launch this morning, a certain amount of mystery still surrounds the new app/site.
What we do know is that the site is integrated with popular music players that have less popular recommendation services than Twitter -- players like Spotify, iTunes, and Rdio. With its algorithm-derived playlists, Twitter Music somewhat resembles Pandora, a site that has quietly been able to maintain its popularity despite the rise of new streaming services. The continued appeal of radio-style continuous programming has influenced such companies as Vevo, which just launched a 24-hour music-centric channel manned by human programmers.
Twitter Music, on the other hand, offers five distinct algorithm-derived channels. "Popular" features mainly Top 40 acts, apparently favoring more distinct personalities than Spotify's most-played list (compare Twitter's number one, Psy, to Spotify's, Imagine Dragons). "Me" gathers artists the user already follows on Twitter. "#NowPlaying" presents music tweeted by people the user follows on Twitter.

More compelling are the middle two playlists. "Suggested" consists, for me, entirely of artists one might recognize from music blogs, many of which I follow on Twitter. "Emerging" (described as "Hidden talent found in the Tweets") is totally baffling -- the algorithm must ascertain that the artists it recommends are just popular enough to be worth hearing but also unfamiliar. I had heard of three of the top ten, including the Virgins, whose seven-year existence means they deserve the "emerging" tag about as much as fun. deserved a "Best New Artist" Grammy. The number one emerging band, Villagers, is a folksy Irish group who just released their second album on Domino.

It's easy to imagine how record labels and publicists might scramble to game the algorithm. At least some programming seems to be based on the prominence of an artist's Twitter account and, though musicians' offstage personalities have always been integral to the reception of their work, a fundamental distinction remains. I can appreciate an indie rocker's sense of humor on Twitter while bemoaning its absence in his music; conversely, I've unfollowed rappers whose  bon mots I enjoy hearing on their records but who use Twitter to relentlessly self-promote. The #NowPlaying channel hints at how the algorithms might account for non-tweeting musicians. As more Twitter users begin to tweet their soundtracks, perhaps the different channels will adapt. (Still, they'll remain reliant on Spotify's and Rdio's respective repertoires.) Until then, it might be best to use Twitter for Twitter, and get your music elsewhere.