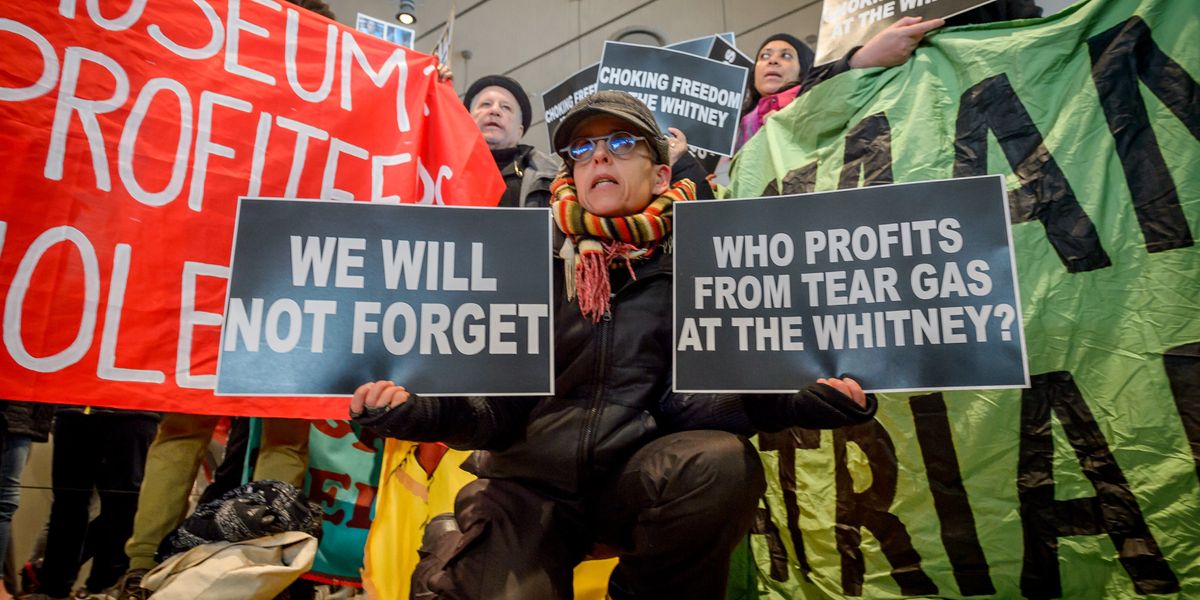 A group of high-profile artists affiliated with the Whitney are calling for the resignation of the museum board's Vice Chairman, Warren B. Kanders, whose company Safariland is known to manufacture tear gas, among other weapons.

The letter points to claims that Safariland tear gas has been used on migrants at the US/Mexico border (as journalists have documented) as well as against activists at Standing Rock, in Ferguson, Oakland, Palestine, Puerto Rico and Egypt, and to arm the NYPD.

"The stakes of the demand to remove Kanders are high and extend far beyond the art world. Alongside universities, cultural institutions like the Whitney are among the few spaces in public life today that claim to be devoted to ideals of education, creativity, and dissent beyond the dictates of the market. Yet, these institutions have been historically entwined with the power structures of settler colonialism, white supremacy, heteropatriarchy, and capitalism" the letter reads.

Related | Nan Goldin Leads Protests at the Guggenheim and the Met

The Verso letter concedes that "There are no easy solutions to the current crisis of the Whitney, and there is no blueprint for decolonization. However, they propose that this moment is "an opportunity for the museum leadership to do the right thing, to stand on the right side of history, and to participate in a transformative process that could set the bar for other institutions across the country."

The artists expresses solidarity for the 100 Whitney employees who ignited the Kanders controversy, writing open letter in November demanding the the museum consider Kanders' termination and a museum-wide forum to discuss the issue. "We felt not annoyed, not intellectually upset—we felt sick to our stomachs, we shed tears, we felt unsafe . . . For many of us, the communities at the border, in Ferguson, in the Dakotas, are our communities" the staff letter read.

Ever Friday since the November staff letter, the activist group Decolonize This Place has been staging weekly protests against Kanders, according to ArtNews. The seventh protest will take place this Friday.

Kanders responded to the Whitney staff letter in his own open letter, arguing that he wasn't "responsible for the decision to use these products" and that "the politicization of every aspect of public life, including commercial organizations and cultural institutions, is not productive or healthy." He also claimed targeting him was misguided: "I think it is clear that I am not the problem the authors of the letter seek to solve," and countered the criticism by explaining that Safariland also produces bomb suits and armor.

The Verso letter, which has now been signed by over 100 artists and scholars, argue that a reckoning is underway in the art world, regarding "broader patterns of toxic philanthropy on museum boards, universities, and other public and private institutions." As evidence, they point to the P.A.I.N. Sackler protests which successfully forced the Guggenheim and the Tate to cut ties with the Sackler family, which profited off the sale of OxyContin, as well as movements at MoMA, the Brooklyn Museum, and other institutions.

The Whitney Director Adam Weinberg has yet to respond to the artists' demand for Kanders' removal. However, according to the New York Times, Weinberg did not indicate that Kanders' removal was a possibility in his response to the Whitney staff in November, saying "The Whitney is first and foremost a museum. It cannot right all the ills of an unjust world, nor is that its role."

Read the full letter and list of signees here.

PAPER reached out to The Whitney for a comment, but they declined as of press time.