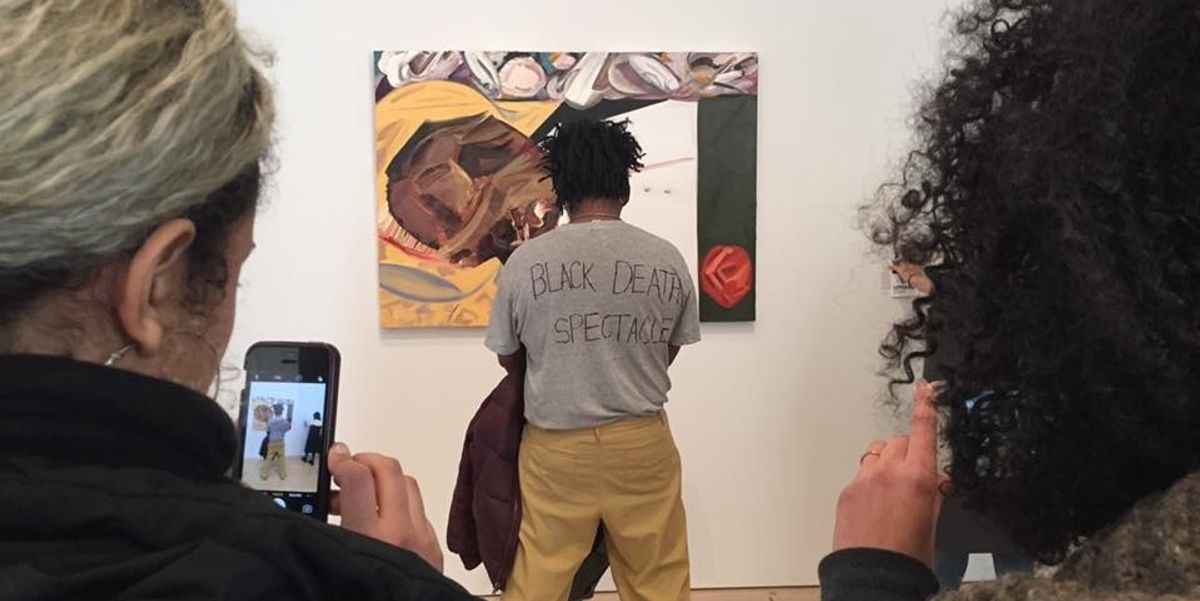 At last year's Whitney Biennial, Dana Schutz's painting, "Open Casket," which depicted the famous photograph of 14-year-old Emmett Till's lifeless body at his funeral after being brutally murdered by four white men in 1955 in Mississippi, sparked a wave of controversy. Calls for the painting to be removed said that a white artist profiting off of black pain was unacceptable, and a group organized by artist Parker Bright protested the work by standing in front of it, blocking it from view, for hours. During the protest, Bright wore a shirt that read "Black Death Spectacle," and images of him blocking the painting became a symbol of the protest.

At the Whitney, a protest against Dana Schutz' painting of Emmett Till: "She has nothing to say to the Black community about Black trauma." pic.twitter.com/C6x1JcbwRa
— Scott Y. (@hei_scott) March 17, 2017

Now, Bright says that his likeness is being used by another white artist, this time at a show in Paris, for profit. The artist Neil Beloufa created a work using the image of Bright, placed on a mirror, to mimic the experience of standing at the Whitney during the protest. The work is currently on display at the Palais De Tokyo, and after posting an impassioned Instagram calling out Beloufa, Bright decided to head to Paris himself to confront the artist in a second protest.

In a GoFundMe campaign that's already surpassed its goal to cover transportation to the gallery for Bright, the artist writes, "I would like to stage another protest inside the Palais De Tokyo in Paris where Beloufa's piece is on display because I believe that Beloufa is appropriating my narrative without consent. This is a form of defamation of me as an artist and arts activist."

The fundraising goal will help Bright "purchase a round-trip ticket, afford living arrangements during my stay, pay for my admission to the Palais De Tokyo to speak to museum curators and speak to the artist, and find ways to reclaim my image and the work that I put forth last year (protest, interviews, and meetings with artist and curators at the Whitney)."

He adds that the protest he performed at the Whitney resulted in constant harassment online, which has caused him "emotional and mental distress" that he still feels today. Bright continues, "Myself and others that were involved with the 2017 Whitney protest put in a lot of hard work (intellectual and emotional labor) to create a conversation about racial injustice within the art world, so it is really unfortunate to see the narrative that I helped create be appropriated and recontextualized without anyone's permission or say in how this work of art is to be experienced."