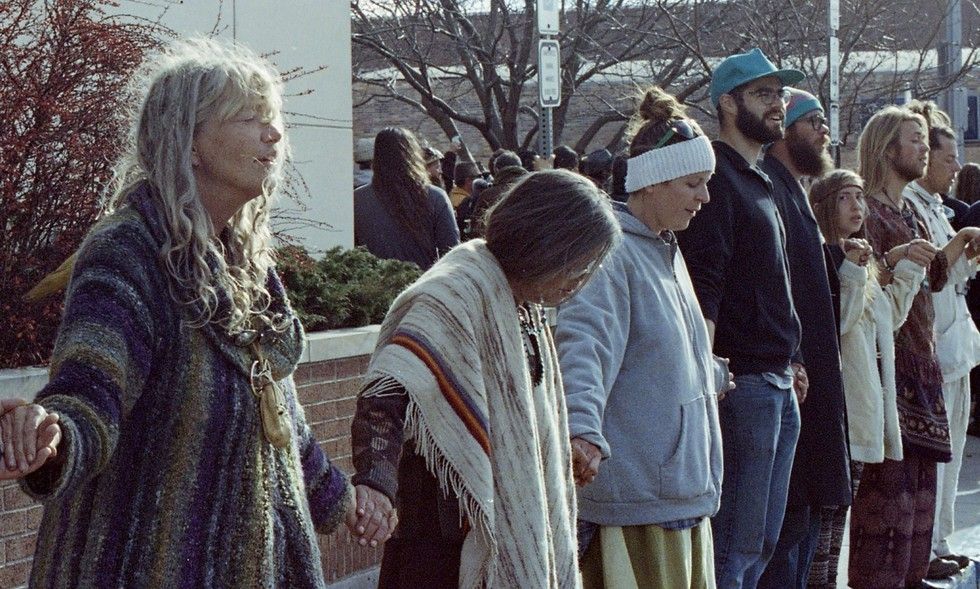 Today in disturbing (yet unfortunately expected) news, it turns out that many newly-arrived protestors at Standing Rock are being called out for treating this fight for basic human rights as something akin to a festive cultural experience.

As The Independent originally reported, there have been several posts floating around social media detailing the way white demonstrators are apparently disrespecting the protests and their hosts by "treating it like it is Burning Man or The Rainbow Gathering," as Facebook user Alicia Smith wrote (Smith has since either deleted or made the status private). "I even witnessed several wandering in and out of camps comparing it to those festivals."

For those of you who aren't familiar with all of the "spiritual journey" white folks who have been showing up to camp: pic.twitter.com/K6e29i73ge

"White people are colonizing the camps. I mean that seriously. Plymouth rock seriously," she wrote, observing that many of these people seemed to be taking advantage of the donations sent by supporters around the world. "They are coming in, taking food, clothing and occupying space without any desire to participate in camp maintenance and without respect of tribal protocols."

Other observers have also spoken out against the behaviors of the "mostly white" people coming, reminding them that the demonstrations "are not a vacation" and that people should leave drugs and alcohol at home. As Facebook user Jon Petronzio pointed out, "this is not a camping trip - if you come for god sakes HELP OUT!", adding later that "nobody wants to hear your songs with your guitar or drum around the fire."

Some younger native protestors have also voiced concerns with the climate of the camps.

I wish so many of these white people weren't so disrespectful. It feels like they've take over. There are SO many.

It feels like a budding Burning Man in some areas of camp. I could scratch my own eyeballs out. Stop.

These reports confirm some of the frustrations a few on-the-ground sources mentioned while we were researching how to best support the water protectors at Standing Rock. They said that there had been some concerns with the misdirection of resources, especially with the arrival of new (and mostly white) "allies" at the protester camps.

As we approach the winter months, the camps at Standing Rock are still in need of help with their winterization efforts. And as several people have pointed out on social media, the most effective way for allies to help is by donating money for much-needed supplies to the Oceti Sakowin camp.

White people: do not tell other white people to go to Standing Rock. It's not Burning Man. Send money or supplies. #NoDAPL