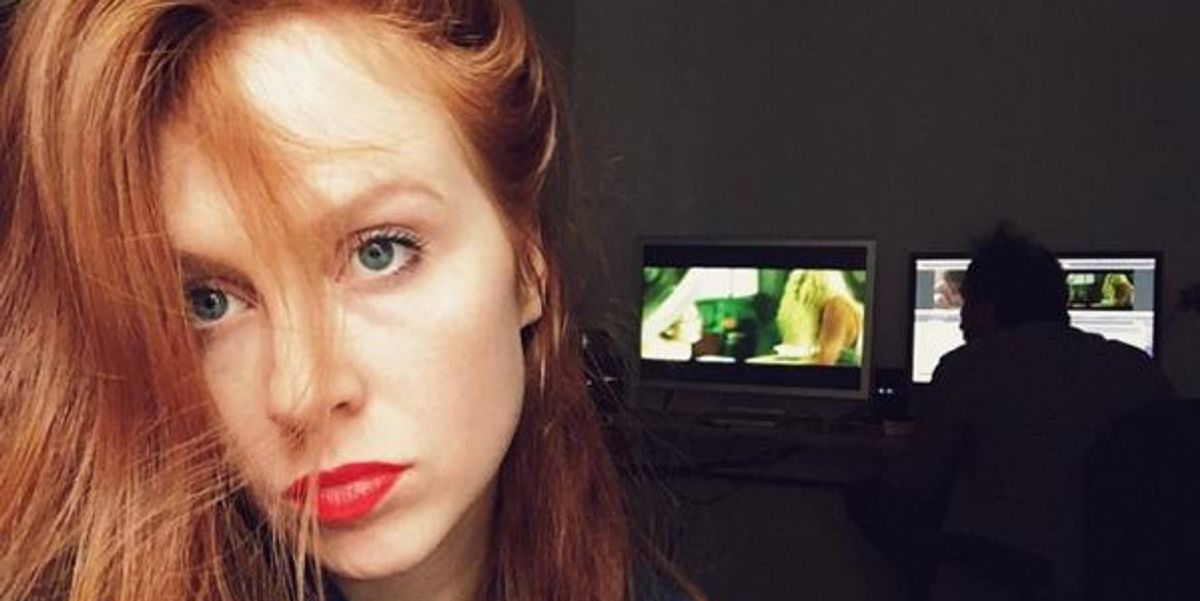 "Romeo and Juliet on Coke:" Writer/Director Elizabeth Wood on Her Film, 'White Girl'


An intense, scandalous work, Elizabeth Wood's White Girl sends its protagonist down a coming-of-age death trip of sex, drugs, and violence. The film, which premiered at Sundance in January and opens in New York on September 2nd, centers on impulsive college student Leah (Morgan Saylor). Eager to experience life in the raw, she moves out of her Manhattan dorms and into a two-bedroom in Ridgewood, Queens, deemed "weird" and "sketchy" by her school friends. When the weed runs out at a party one night, Leah approaches a trio of Puerto Rican men on the street for drugs. She falls hard for one of them, Blue (Brian 'Sene' Marc), a sad-eyed local dealer, and their romance forms the backbone of the film.

Wood's debut film, which she wrote and directed, echoes events from her own life. An Oklahoma City native, she moved to New York in 2001 to study at The New School. During her time as a student, she got an apartment in Ridgewood and fell in love with a drug dealer who would get arrested.

Below, Wood, 33, discusses the film's collision of race, class, gender, and gentrification. She also touches her years as a Ridgewood gentrifier, and why she views the film as a dark comedy.


Given the setting, the age of the characters, and the involvement of Kids producer Christine Vachon, a lot of people will compare White Girl to Kids. How do you take that comparison?


It's of course very flattering. It's a film that I love that was very exciting to me when I was growing up. They insisted that quote about Kids be on the movie poster, and I thought "Well, I can understand, you're trying to get people to come see the film." But I do think it's a totally different flavor of film. The same way anytime there's a film with young women in it, they compare it to Girls. So if it has graphic sex or shocking material, it must be like Kids. So I can see why people would say that, but I don't think they're very similar films at all.

In an interview with i-D i-D you mentioned that seeing Kids at 13 "encouraged me to be worse behaved," because you were drawn to the danger it depicted. Do you think White Girl could similarly enchant a 13-year-old in 2016?

That's probably very possible, but if it weren't from my life it would be from something else. I just think if someone is excited by this type of material they might be excited by this film. But a lot of it is glamorous, what can I say? Sex and drugs are glamorous. I didn't create them.

What is it about New York that fosters these kinds of stories of dangerous youth?

Well, it could take place anywhere. In terms of the material, it's about race and I think New York is an incredible place for culture clash and for people of all types being together. That's what's frustrating sometimes about leaving New York. Everyone is much more segregated. Of course, New York is segregated, but if you're on the street you're going to have a relationship with people who are different from you. As for the sex and drugs, it wasn't like I hadn't seen it before in Oklahoma. If anything, they're crazier there.


I think it's a complicated story about a lot of things, but gentrification is at the heart of it. Race, socioeconomic differences, gender, and gentrification are all differences that are in the backdrop of what I call 'Romeo and Juliet on coke.' Even if they wanted to be together, all these things are going to prevent that. They don't have control over these systems that they're living in.

Toward the start of the film, one of Leah's friends says he'd rather live in a dorm than a "weird area" like Ridgewood. How common of a sentiment was that when you went to college in New York?

Certainly I had friends who would come over to our apartment and be like, "Whoa, I would never live out here." We really were like pioneers of gentrification out [in Ridgewood]. We loved the neighborhood. It was exciting. It was a big struggle for us to live in New York financially, so it was affordable. We weren't in some fancy loft; we were paying $400. It was really the only way we could be here at all.

At the start of the film, there's a firewall between Leah and her white friends and the Puerto Rican men on the street. Do you see Leah's attempts to breach that firewall, when she goes to buy weed, as brave or entitled?

I don't think it's brave; it seems more like she's showing off. She may feel brave in the moment, but it's certainly not a brave act. And I think it came from a desire, more than just drugs, to be like, "I'm here, I'm going to be friendly with everyone." But good intentions are not always right.

Issues of privilege weren't as commonly discussed when you were Leah's age. Did they cross your mind at all at the time?

Definitely. I was at Eugene Lang [College at The New School] writing about whiteness while having this relationship with a boy from my neighborhood. All my writing was exploring this. I made my first short documentary about these kids in the neighborhood who were selling drugs and had never done them versus my classmates at a fancy college who were bragging about what drugs they'd done. The early draft of the film included all of that, but it was just too much. I had to write it out to get it out, but it was 200-page draft.

I have a bit of a problem with reading YouTube comments, so I watched the White Girl trailer and read the comments–

There's a lot of anger there. There was anger about the title, the interracial relationship, the depiction of a young woman doing drugs and having sex.

Not to mention the anti-Semitic and racist comments. Like, who are you fucking people?

They're always there, no matter what the video is. Was it at all a goal of yours with the film to antagonize people with more reactionary or conservative tastes?

That's certainly not an intention. I think that has something to do with my personality. It's a personal story and the kind of film I would like to watch. The kinds of films I like to watch are similarly intense if not more so. I also haven't seen that kind of reaction from people who have actually watched the film. I think someone might not realize it's called White Girl because I want to speak about whiteness and gender. It's also a term for cocaine. I think maybe they're confused. It's a reaction, and you can't control people's reactions.

When telling a story like this, how do you decide how far is too far? Were there any moments you considered or scripted, but then decided were too graphic?

Sure, in the first draft of the film the character had sex with many more men. [laughs] And I thought, "Well, I'll cut back on that." Also there's that first party scene. I invited a lot of my friends, and they got so into this shoot. They were all getting naked and acting totally out of control. It was the best footage ever, but it didn't make sense. It was like, "What kind of party is this?" That was my friends partying and showing off. I didn't like that. If anything, I took away from some of the excess and craziness that existed in my life to make the film more palatable.

To what extent do you think this character is living out a fantasy of being young and dangerous in New York?

I think a certain type of person makes decisions to make their life more dramatic at every turn, probably just to entertain themselves. That probably does come from a place of privilege. The same way it was the rich kids at your school doing all the drugs and not the kids on the corner. It's like you're trying to feel something. You're trying to feel pain or feel alive. I think the character thinks that; I know when I was living this situation I knew that it would be my first film. And I continue to feel that way about life because I'm a storyteller.

We spend a lot of time watching Leah party with her friends. How important was it to you to convey just how fun and exciting this world was to this character?

To me, it's a very fun story. I wanted the film marketed as a dark comedy, though I didn't win that one. I laugh, I smile through the whole thing. There's fucked up things that happen, but that's life. That doesn't take away from the beauty or the excitement of it. That's probably just my personality, but I never felt that it was a terribly dark movie.

Do you think other people see it as a dark comedy?

I think people who can relate to the experience or have had something similar happen will understand it. There's a lot of joy, a lot of laughter at the audience viewings. For people who're very foreign to this type of experience, like a worried parent, they might feel like it's a very depressing film, but I haven't gotten that feedback so much.

When you walk through New York now and see drunk college kids like Leah, what do you think?

I just smile. That was yesterday for me; tomorrow this life will be done. It's just all a blur.

You have that distance now.

Sure. It's not like I'm the best-behaved person in the world now, though. I still have a little fun in me [laughs].

The white men in positions of power in the film all come across as fairly repulsive. What has your experience been as a woman in an industry dominated by white men?

I feel like the only people so far who have had strong negative reactions have been a handful of white men. They speak louder than the rest, so their takes come up first on Google. But I think I've not fully experienced that yet. I worked with Killer Films who were nothing but supportive, my husband [Gabriel Nussbaum] who was a producer, and my other best friends who were executive producers. Now, I'm going to Hollywood and having meetings and sitting with a lot of white men, but my radar sees what I want my career to be like. I don't really want to answer to a lot of white men. I want to tell my own stories, keep creative control -- unless if the project is really fucking awesome. If it's not really fucking awesome, I just want to do things on my own terms.

I've read rumors that you may be attached to a Captain Marvel movie. Can you comment on that as of now?

I can say I'm certainly not attached, even though IMDb does say that. I was surprised when I saw that. I was like, "If I'm attached, where's my check, guys?" Maybe it'll be a surprise and Marvel will show up with balloons soon and be like "surprise!"