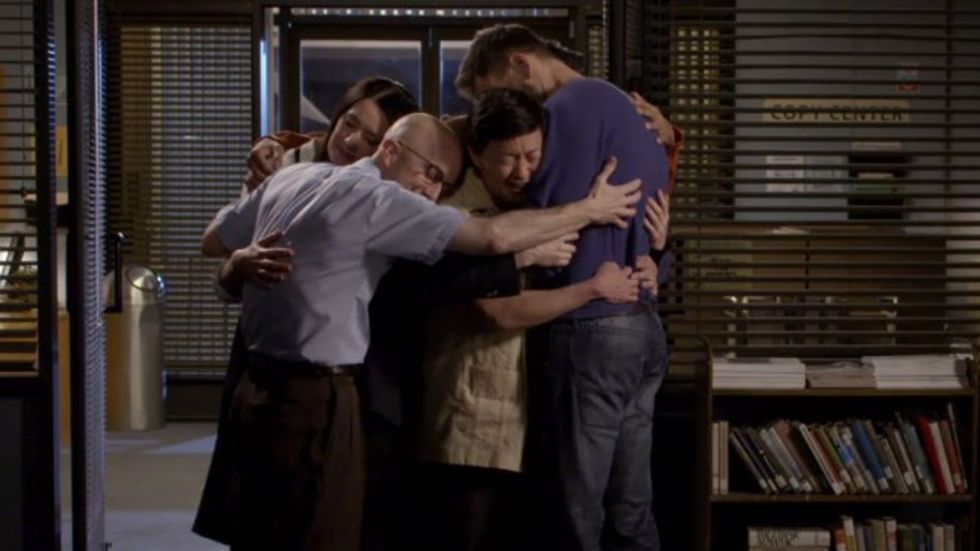 Which TV Show Played With Itself the Most? Ranking the Most Meta Finales

by Eric Thurm
PAPERMAG
Community ended its hashtag-fueled sixth season on Yahoo! today, after a run that included losing its cantankerous showrunner, regaining said showrunner, getting canceled by NBC, picked up by a large internet company people don't think a lot about, and churning through half its cast in the process. So, as the show was wont to do, it spent what might be its last episode (not including the inevitable movie) thinking about itself. With a few more characters leaving Greendale, how would everyone envision a possible season seven?

Without spoiling "Emotional Consequences of Broadcast Television," which is generally speaking a very good episode that will be particularly effective and at least a bit moving for long-time fans of the show, it follows in a long, storied line of self-referential series finales. (Or at least, of episodes intended as such.) That TV finales, which are notoriously difficult to pull off by nature of the medium (which incentivizes writers to at all times generate more story, in order to more effectively keep the show going and keep viewers coming back), call attention to the impending end isn't surprising -- after all, if the show has been running for a while, the entire world it created is coming to an end, and even if life goes on for the characters, the viewers, along with the entire production team and cast, won't be around to see it.

The most famous example of this is likely the end of St. Elsewhere, infamous even for people who didn't watch the show. Spoiler alert, I guess (with an additional obvious spoiler alert for all of the series finales discussed in this piece, because duh): the entire show was the fantasy of autistic boy Tommy Westphall, who has been playing with a snowglobe containing the hospital.

In honor of Tommy Westphall (and the attendant efforts to prove that all of scripted TV isn't "real" via connections to St. Elsewhere), we look through some of the more well-known, self-reflexive series finales and rank them--how many meta snowglobes do they earn? (Insulting the viewers is optional.)

One of the weirder series finales, in that it isn't a series finale. Showrunner Dan Harmon clearly wrote "Introduction to Finality" as the last episode of the show, but it wound up as a button on his original tenure before being fired, scanning the end on multiple levels. Also, it ends with Abed (often Harmon's stand-in) literally disappearing inside his own imagination.

Has it already been two whole weeks since the Mad Men finale? Where has the time gone? Are we still having a meditation dream at Esalen? Are we enlightened? Well, it seems pretty clear by now that Don Draper did, in fact, make that Coca-Cola ad, proving his own greatness at selling things along with Matthew Weiner's (and the pervasive horror of late capitalism).

Verdict: Mad Men was always kind of obliquely about itself, so this isn't much of a surprise. 6/10 snowglobes.

"Last Lunch" is a finale that takes on almost all of the standard tropes of series finales -- life goes on for the characters working on TGS, but they reaffirm their "work family" relationship in the process of putting on one last show. To top it all off, we get a zoom out at the very end suggesting that the entire series is actually a show made by Liz's great-granddaughter for NBC, which the immortal Kenneth still run

Verdict: Meta, but in a cutesy way that's more about the tradition of TV finales (with a specific reference to the snowglobe) than it is about the show itself. Though 30 Rock is also about making TV, so... wait... *cough* 7.5/10 snowglobes.
How I Met Your Mother, "Last Forever"

Finally, Ted Mosby finishes telling the annoying story he's been boring his kids with for years. The rightly-reviled How I Met Your Mother finale did have a noble goal -- to comment on the nature of the show by allowing life to take its course and pull the cast apart and placate the three remaining Ted/Robin shippers. Still, the move might have played better had they not made the show legitimately engaging in the last season -- the alternate ending, which allows Robin and Barney to stay together and keeps Tracy as a legitimate character instead of a walking uterus, is far superior.

Verdict: Not more meta than How I Met Your Mother ever was (which, admittedly, was pretty meta). 5/10 snowglobes.

Roseanne, "Into that Good Night"

Another widely hated series finale, this one found Roseanne's TV character reveal that the events of the last season were made up -- her husband, Dan (John Goodman), had actually died of a heart attack. It was a stark rebuke to the audience, and an opportunity to look at the value of story-telling.

Verdict: Having your protagonist and alter-ego read from a book about the themes of the show is about as meta as it gets. 9/10 snowglobes.
Newhart, "The Last Newhart"

Though you could also have him wake up as his character from an older show that he also starred in, literally proclaiming that it was all a dream.