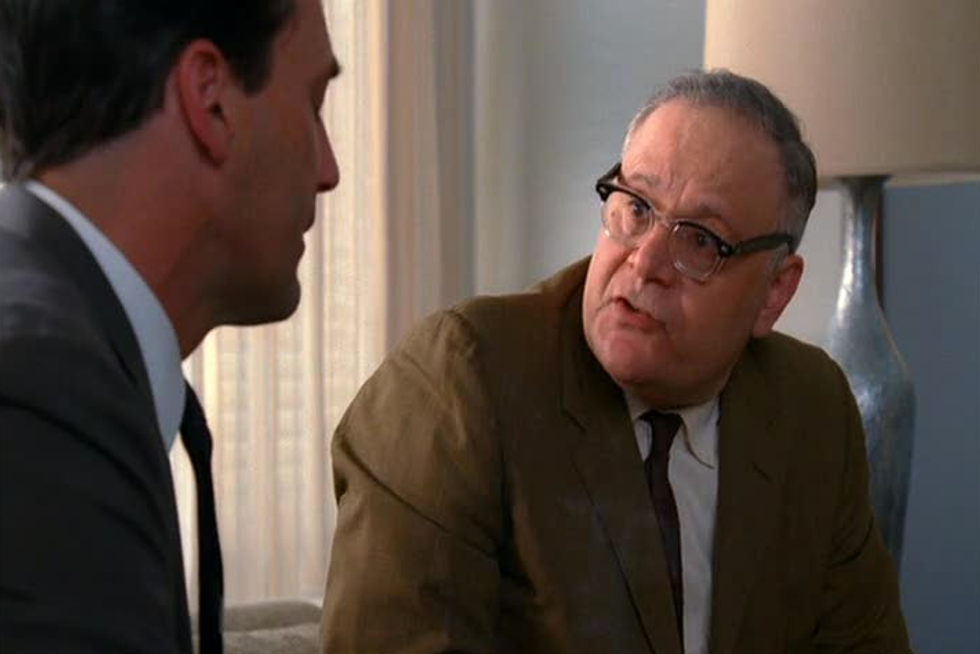 Where Are They Now? All of the Characters Mad Men Has Left Behind

Don Draper is a man who leaves things behind. Though his "mysterious" past is by far the least interesting part of Mad Men (possibly even less interesting than whether Lou Avery's cartoon got picked up by a Japanese studio), it does help explain why Don does the things he does: He learned very early in life that you can get out of any problem by running away from it, claiming that you aren't the person everyone else thought you were, and at least pretending to start over.

As the series prepares to wrap up, Don has left his life yet again, taking a seemingly endless road trip west, toward California. For all that Don has simply abandoned advertising, he's kept in contact with his daughter Sally, the most important person in his life -- but that doesn't mean much to the many, many other people whose lives he has roamed through, leaving a trail of destruction and psychological anguish in a time when therapy was a lot more taboo. Here are a few of those people, along with some guesses about what they've been up to.


Bobby Drapers One Through Three
Wait, Who Is That Again? Don's eldest son, who is so unimportant in comparison to Sally that he has been played by no fewer than four actors, without anyone really noticing other than to remark on how boring he is as a character.
Why Don Left: This one isn't so much Don's fault. Not a lot you can do when your son going through puberty involves transforming into a different actor... three times.
Where Are They Now: Huddled together for warmth in the snow, seeking their father's love. In vain.

Frank Keller
Wait, Who is That Again? Don's accountant! Remember him? Megan had to invite him to the surprise birthday party because Don tries really hard not to let anyone come into his life and has no friends.
Why Don Left: Since he's basically giving away all of his possessions and returning to full-on hobo status, Don probably doesn't need Frank's services anymore. Poor Frank--he was so excited about being invited to Don's "gathering of intimates."
Where Are They Now: Still in the office. Next year's taxes won't do themselves.

Midge
Wait, Who Is That Again? The first woman we ever see Don with during the show! Midge (played by Rosemarie DeWitt) introduces him to Beatnik culture, and generally seemed to find her paramour amusing in his stuffiness.
Why Don Left: She found another man and got into heroin--they were just an incompatible couple, I guess. It happens.
Where Are They Now: Kind of depressing, but... probably dead, right?

Freddy Rumsen
Wait, Who Is That Again? The only person on the show to crawl even deeper into a bottle than Don, Freddy is a former Sterling Cooper copywriter reduced to freelancing, pitching from office to office, sometimes as a front for Don's actual ideas.
Why Don Left: For much of season seven, Freddy is basically the closest thing Don has to a male friend (not that he has many female friends anyway) outside of the boundaries of the SC&P office. But after giving a level-headed, powerful speech trying to get the younger man to quit drinking, Freddy disappeared.
Where Are They Now: In an AA meeting, complaining about Peggy.

Dr. Faye Miller
Wait, Who Is That Again? One of Don's girlfriends from season four and an extremely accomplished psychologist who works at a consulting firm doing market research.
Why Don Left: She was too intimidating, and less exciting than his secretary, Megan. Don expected Faye to also be a mother to his children, something she was unprepared for. She might have been the best person Don ever dated, but getting dumped did give Faye the opportunity to level one of the most potent diagnoses of Don--that he "only likes the beginnings of things."
Where Are They Now: Drinking champagne on a yacht with an extremely handsome, compassionate, and intelligent man who makes her very happy and fulfilled. Or not. Who says she needs a husband?